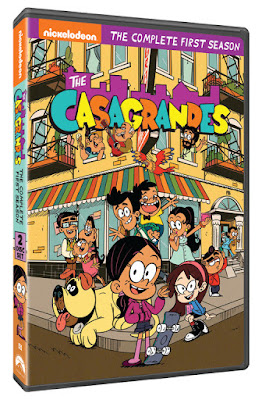 How many have seen the Casagrandes? The entire first season is now available on DVD non a 2 disc set. You have the option to watch in Spanish.

There’s plenty of love, laughter, food, and adventures in The Casagrandes: The Complete First Season DVD! This spin-off from the award-winning animated series The Loud House follows Ronnie Anne, a free-spirited and skateboard-loving 11-year-old who moves to the big city to live with her large and lovable Mexican-American family, the Casagrandes. Featuring all 20 episodes from the critically acclaimed debut season, this DVD release sees Ronnie Anne adjust to big family life in the city as she pitches in at the family Mercado, explores the neighborhood with her best friend Sid, and has fun with her abuelos, tíos, and primos.
The Casagrandes: The Complete First Season episodes:

Thanks for stopping by today!!