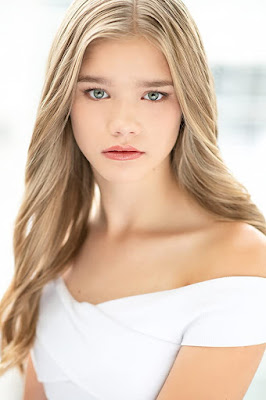 Mercy: What started your interest in acting?
Kadence: The first time I had an interest in acting, I was about 2 1/2 and as almost every little girl, I watched Hannah Montana. And for years I kept telling my parents "that, that is what I want to do, I want to be like Hannah Montana. I want to do what she does" and not until I was 5 did I finally get to start achieving my dream.
Mercy: How did you get the role of Anna?
Kadence: Its weird, that was so long ago. But, I guess it started out like a normal audition. And then it was maybe a couple weeks later, that I got an email from my agent telling me that I booked the role of Anna.  I was beyond excited! It was my first ever T.V show role.
Mercy: How are you most like and unlike Anna?
Kadence: In a lot of ways, I'm just like her. You know I've grown up playing her, so there is a part of me that is her. Anna and I both speak our mind. But, Anna... she has a mean side, and I don't have that inner mean that she does. And everyone can have their moments. So, we both speak our mind, but Anna has that mean side that I don't.
Mercy: If you could do a movie with any actor/actress of your choice who would it be?
Kadence: Probably, Jennifer Aniston. I look up to her so much, shes a very independent, strong woman. And I would love the opportunity to work with with such an amazing woman.
Mercy: What has been your favorite scene of playing Anna?
Kadence: I loved filming the baseball scene. And I know I've said it a bunch of times! And I've had the opportunity to film amazing scenes, but this one continues to be my favourite! It was fun to experience a different side of her. She wasn't into sports to much before. And after that episode, to see her a bit more interested in Baseball. So I love that, that scene was a chance to bring out a different side to her.
Mercy: What is one thing most people don’t know about you?
Kadence: This is a weird one, because I'm a very open person. But one thing a lot of people don't know, I love cleaning. Like on set, I'm always cleaning our cast room. I am always throwing out the plates and cups and stuff. So yeah, I really enjoy cleaning.
Mercy: If you could play a role in any movie from the past, who would it be?
Kadence: Sandy from Grease! I've always wanted to do a period piece set in the 50's! So I would definitely want to play Sandy.
Mercy: Any upcoming projects you can share with us?
Kadence: I, sadly don't have any upcoming projects. But, if anyone would like to see me in something other than When Calls The Heart I did a few episodes of the show Riviera, season 2 last year! Now it is very different from When Calls The Heart!
Mercy: Where do you see yourself in 10 years?
Kadence: I hope to be doing my acting! You never know what can happen! But I do hope to still be acting, either living in L.A or Vancouver!
Keep Up With Kadence-
Twitter
Instagram
IMDB