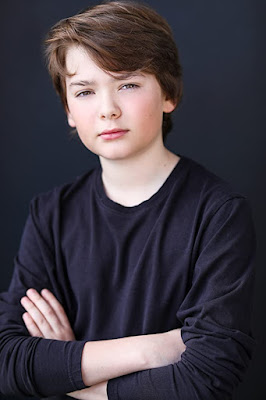 Mercy: What started your interest in acting?
Christian: Well, I started as a toddler in commercials. I was a pretty outgoing kid so I think it was a perfect thing for me to do. When I was 5 years old, I told my mom and dad that I wanted to be in movies so they asked my agent to try me out for film and TV. Within the first couple of months I booked my first Recurring TV role on a series called Cult and then I continued to book some amazing and fun roles after that.
Mercy: How did you get the role of Timmy?
Christian: My sister Ava had booked the role of Opal a couple of episodes before my audition for Timmy back in Season 3. I loved the whole set and actors that worked on the series so I was pretty happy when I found out I had booked it. Playing Timmy and working on When Calls The Heart is a lot of fun. I’ve made some great friendships throughout the seasons and every day on set there is awesome.
Mercy: How are you most like and unlike Timmy?
Christian: Well, I think I am like Timmy in the fact that I love the outdoors, playing baseball and I am very much into riding, although Timmy isn’t quite as confident on a bike yet. I think Timmy has taken awhile to come out of his shell and it’s taken a few seasons to have some confidence in himself. This season I feel he is much more outgoing and more confident so I think he is a little more like me now. I love getting to play Timmy and see the changes in him over the Seasons.
Mercy: If you could do a movie with any actor/actress of your choice who would it be?
Christian: If I could do a movie with anyone, I think it would be Jim Carrey because I think he is a great actor and super funny and I can imagine there wouldn’t be a dull moment on set. I have done a lot of dramatic roles and not as much comedy, so I think it would be great to do a project that has some comedy.
Mercy: What has been your favorite scene of playing Timmy?
Christian: I have a few favourites but I think one of my top choices would be the baseball scene with all the Hope Valley kids. It was awesome getting to play baseball on set.
Mercy: What is one thing most people don’t know about you?
Christian: Well, I think there are a few things that people may not know about me. I am very big into sports and I have been Mountain Biking since I was a little kid, and one of my highlights is heading up to Whistler to ride the mountains. I’m looking forward to having the hills open again so I can get out there and have some fun.
Mercy: If you could play a role in any movie from the past, who would it be?
Christian: I think if I could play a role from a movie it would probably be someone from Fast And Furious. It’s a very fast paced type of movie and also I love anything to do with cars.
Mercy: Any upcoming projects you can share with us?
Christian: I just recently finished a fantastic project back in February that I can’t talk about yet. It was probably one of the most interesting sets I have had a chance to work on. I can’t wait to share!
Keep Up With Christian-
Instagram
Twitter
IMDB