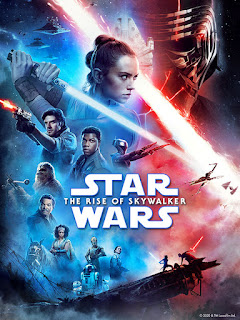 Star Wars: The Rise of Skywalker, Lucasfilm and director J.J. Abrams’ riveting, inspiring conclusion of the seminal Skywalker saga, arrives on Digital March 17 and Blu-ray March 31. The in-home release comes with over two hours of bonus material, including a feature-length, making-of documentary and behind-the-scenes access to the cast and filmmakers who brought the epic scenes and characters to life! 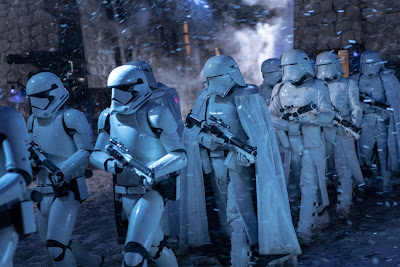 Unlike most people in America, or the world for that matter, I never saw the Star Wars movies after the original three, so I was unsure what to expect with Star Wars:The Rise of Skywalker.

I was far more impressed than I thought I would be. The film is worth watching just for the visual aspect. The space battle scenes are far superior to any science fiction movie that I recall seeing in recent years due to the fantastic special effects, but the effects are not limited to those portions of the film. Throughout the Rise of Skywalker there are breathtaking shots that will no doubt stay with the viewer for quite some time.

As far as characterization, it’s hard to beat Han Solo, Luke Skywalker and Princess Leia but once again I was impresse. Having scenes that featured the trio were a great addition to this final chapter, but I have to admit that Finn, Poe Dameron and others carried the movie fine, but in particular Daisy Ridley did a very satisfying job as Rey. She was perfectly cast as the young but troubled and throughout much of the film, angry, warrior. Her intensity was evident the entire time and her varying emotions were captivating. Any other actress could have made this character boring or unrealistic but not so with Daisy Ridley portraying the lead. Adam Driver also held the attention of the audience no doubt in his performance as Kylo Ren.

While some critics were harsh with the Rise of Skywalker, I see no reason why they should be. I have to remind myself that with a project this big there will always be those that do not like the outcome. In my opinion the story was very well done and really I do not see how they could have wrapped it all up any better than they did. Bringing back Lando Calrissian, the final battle, the suspense with Finn at the end, the concluding moments with Rey. My thoughts on Star Wars: The Rise of Skywalker is that is was very well done and a very fun film! The ONLY thing I did not personally like about the film was the scene at the end with two women kissing. While I realize that everyone is fearful of not giving some nod to the present movement, I felt it unnecessary and actually inappropriate for an audience that surely including many young children. Other than that, five stars!

The ninth and final episode in the Skywalker saga welcomed the return of original characters Luke Skywalker, General Leia Organa, Chewbacca, C-3PO, R2-D2, Emperor Palpatine and Lando Calrissian, along with the latest generation of heroes and villains, including Rey, Finn, Poe, BB-8, Maz, Rose, General Hux and Kylo Ren. Newcomers include Jannah, a new ally of the Resistance; Allegiant General Pryde of the First Order; and smuggler Zorii Bliss.

Star Wars: The Rise of Skywalker is packaged several ways to ensure fans get the most out of their at-home viewing experience. The Multiscreen Edition includes Blu-ray and a Digital copy, giving viewers the flexibility to watch the film on different devices. Those with 4K Ultra HD capability may opt for a 4K UHD Ultimate Collector’s Edition, including 4K UHD, Blu-ray and a Digital copy. 4K Ultra HD provides four times the resolution of HD paired with fully immersive picture and sound and Dolby Atmos audio, allowing viewers at home to practically feel the Force.

Bonus features include*:
The Skywalker Legacy – The story lives forever in this feature-length documentary that charts the making of Star Wars: The Rise of Skywalker.
Pasaana Pursuit: Creating the Speeder Chase – Dive into the making of the movie’s epic landspeeder chase and discover how this spectacular sequence was brought to the screen.
Aliens in the Desert – See what it took to create the Pasaana desert scenes, from the sheer scale and complexity of the shoot to its colorful details.
D-O: Key to the Past – Explore the ship that connects Rey to the mystery of her missing parents and get to know the galaxy’s newest, irresistible droid.
Warwick & Son – Warwick Davis, who played Wicket in Star Wars: Return of the Jedi, dons the Ewok costume once more; this time joined by his son Harrison.
Cast of Creatures – The team behind the film’s memorable creatures reveal the puppetry, makeup, prosthetics and digital magic that bring them to life!
Digital Exclusive:
The Maestro’s Finale – Composer John Williams reflects on his body of work for the Star Wars saga and shares insights on scoring Star Wars: The Rise of Skywalker.
* Digital bonus offerings may vary by retailer.

Thanks for stopping by today!!  Hope you all are having a wonderful week!!