Overcomer Coming on Blu-Ray and DVD 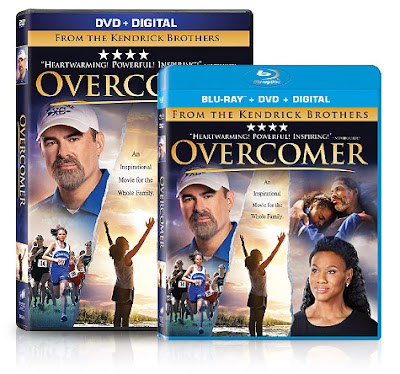 I want to say right upfront ,I highly recommend Overcomer by the Kendrick Brothers.  We have seen every one of their movies from the start and were just as impressed with this one as we were the very first.   You definitely want to purchase this one when it releases December 17th, it is already available on Digital, to add to your Christian library.  Overcomer would also make a GREAT holiday gift.

OVERCOMER is from the creators of the #1 box-office hit War Room. Life changes overnight for coach John Harrison (Kendrick) after he loses his basketball team and is challenged by the school’s principal, Olivia (Shirer), to coach a new sport he doesn’t know or like. As John questions his own worth, he dares to help the least likely runner take on the biggest race of the year. Filled with a powerful mix of faith, humor and heart, this inspirational story will have you on the edge of your seat.

The Blu-ray, DVD and digital release come with an extensive array of bonus material, including 10 minutes of extended and deleted scenes, fun bloopers, exclusive commentary by the Kendrick Brothers, moving in-depth looks at the power of forgiveness, identity and more.