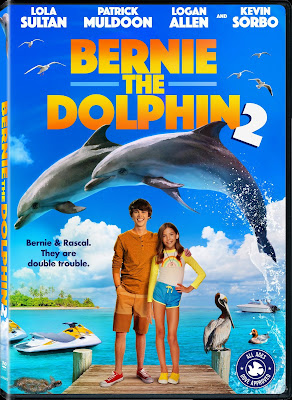 A heartwarming adventure for the whole family, Bernie the Dolphin 2 arrives on DVD, Digital, and On Demand on December 17 from Lionsgate. Starring Kevin Sorbo and Patrick Muldoon, the film is approved by the Dove Foundation for all ages. The Bernie the Dolphin 2 DVD will be available for the suggested retail price of $14.98.
OFFICIAL SYNOPSIS
Kevin and Holly are thrilled that their dolphin friend Bernie has come back to the harbor. But so has their old enemy Winston (Kevin Sorbo, TV’s “Hercules: The Legendary Journeys”), who’s just gotten out of prison. As the kids have fun with playful dolphin Rascal and sassy parrot Mango, Winston is forced by his old partner to help kidnap the talented Bernie. Can Kevin and Holly uncover the scheme and save their splashy friend before it’s too late? This charming family comedy also stars Patrick Muldoon (Starship Troopers).

My husband actually handled the interview, which was done over the phone, so I have transcribed it below for you all!! Enjoy!!

James: Can you share any behind the scenes happenings from Bernie the Dolphin 2?

Kevin: One of the coolest things was when we were over there in Mainland on the east coast of Florida is that it was the same marina where they shot The Creature From the Black Lagoon.  As a kid I grew up watching the reruns of that multiple times.  It always freaked me out because I grew up on a lake in Minnesota and every time we would go swimming somebody would bring that up and you would think, there could be some creepy creature swimming right below us. Sort of what Jaws did to wreck ocean swimming for some people.

James: Is there anything in particular you liked about acting in Bernie the Dolphin 2?

Kevin: I love the way they wrote my character.  I love the redemption value of the character, because my guy was a bit of a jerk in the first one. I think a key element in both these movies Bernie 1 and 2 is that there is a lot of humor. It is a rated G movie and I have said it before there are not a lot of n rated G movies out there. Kudos to Lionsgate for doing that. I get stopped all the time by people asking to please make more movies that families can see.  There are like 80 million households out there that want movies that there 7-10 years old can watch and all ages will enjoy. My character gets a work release type program to get out of prison and he gets stuck in the last place he wants to be, the place that actually put him in prison.  His guilt and the kid's forgiveness of him and their father who has every right to be angry at him, gives him a second chance. They wrote a really wonderful transition, it wasn't cheesy, it wasn't something where people say, give me a break.  People can see that this guy really feels bad for what he did.

Bernie the Dolphin 2 released on December 17th and is available for purchase.  Pick up both 1 and 2 if you have not seen the first one yet.  Watch the trailer below!


Thanks for stopping by today!!