Guest Post From Barbara Ankrum Re: HOLIDAY HEARTS, based on THE CHRISTMAS WISH (Airs November 23, 9/8c, Hallmark Movies and Mysteries)

Thanks Mercy, for asking me to share a little about my journey getting my book adapted into a 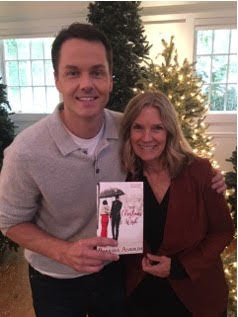 I wrote THE CHRISTMAS WISH as part of my The Canadays of Montana series for Tule
Publishing, and it was my first Christmas story ever. I was shocked when my publisher, Jane
Porter, optioned it to Hallmark. I’d lived in LA forever and knew the odds. Anything can happen.
It took about a year and a half from the first nibble I got on the book to the actual production,
which, in Hollywood terms, is warp-speed. But for most of that time, I waited with baited breath
to see if it would really happen. As luck would have it, I had a fantastic executive producer who
believed in my story from the start and had a vision for it that she, the director, screenwriter and
cinematographer beautifully transferred to the film. 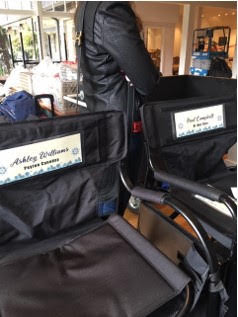 In late September, my daughter and I flew to Vancouver for a few days on our first ever girl’s
trip to the set of HOLIDAY HEARTS and I wasn’t sure what to expect. But wow. Canadian
crews are some of the nicest people you’ll ever meet. All of them. They introduced us around as
VIPs and pulled cast chairs up for us at the video village (the place where the director and
cinematographer sit to watch the video screens) set us up with headsets and allowed us to be
interlopers for a couple of days. The set in Vancouver’s Stanley Park Pavilion was dressed to
look exactly as I had pictured it in my head as I was writing that scene. It’s hard to describe the
feeling of your story coming to life right in front of you. And also realizing that this story had
just expanded exponentially to include all of these people who were working so hard to make
this movie good. There were a few emotional moments, I tell you.
The stars, Ashley Williams and Paul Campbell, could not have been nicer or more perfectly cast
as Ben and Peyton in this friends to lovers story. Ashley has a hilarious, contagious laugh and
Paul was often the instigator of that laughter. He’s so nice and very funny and at least seven feet
tall. (I exaggerate. A little.) At the same time, both of them could drop instantly into character
when the cameras rolled to capture that deep emotion or just plain fun we all love to see in these
movies. All the other characters I wrote, named and described in my book were there, too,
including Lily, the little girl who brings Ben and Peyton together. It was kind of surreal, sitting
and chatting with them all. Sharing meals. The whole visit, really, was a writer’s dream.
I hope you get the chance to watch HOLIDAY HEARTS this season. I hope you love it. 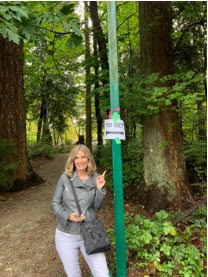