“Go Fish” is a new children’s film released by Lionsgate and no doubt after seeing the trailer, many little ones will be asking mom to purchase it. 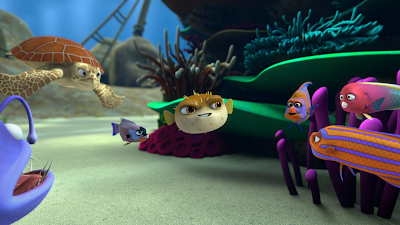 The concept of “Go Fish” is a good one, especially in light of the popular superhero movies over the last decade.  A parrotfish named Alex has always dreamed of being…you guessed it, a superhero and when a strange dark “goop” appears near the coral reef which is his home, he and his pals venture off to save the day…and their home.  The nice thing about “Go Fish” is that Alex doesn’t have to don a costume to be a hero, a route that would have taken away from the truth that one can do “heroic” acts without the typical garb.  Alex is not alone in his quest, but is joined by three pals, a blowfish, a sea horse and an eel and all provide for good characterization suitable for the age expected to be viewing this.  Adventure abounds as Alex and his troupe encounter an undersea volcano, angry sharks, an abandoned plane and run into a sunken ship that has hidden treasure.  You can expect the typical fare that makes a movie like “Go Fish” popular with children and enjoyable by adults; some funny moments, suspense just at the right level for the intended audience and the element of working together is explored throughout the film and emphasized at the end.  What caught my attention, and I mean this literally,  about the movie was the beautiful colors.  While I am no expert on how to film a movie or to utilize animation or cgi, “Go Fish has done very well in this respect.


All in all, “Go Fish” is an enjoyable film for young ages and parents can be comfortable as there is nothing offensive about the film.  In a day where even in movies that are specifically designed for children that are younger have crude humor or innuendo, those involved with “Go Fish” decided to do what others can take a lesson in.  Create a film for all ages that is fun, has some positive elements and will keep their attention.

Official Synopsis:
All his life, plucky parrotfish Alex has dreamed of being a superhero. He gets his chance when a mysterious flood of black goop erupts near his coral reef. As Alex and his pals — a sea horse, an eel, and a blowfish — swim off to confront the menace and save their home, they face a sunken ship with hidden treasure, an abandoned airplane, angry sharks, and an undersea volcano. This thrilling, funny family tale stars Mark Hamill, iJustine, and Ron Perlman. 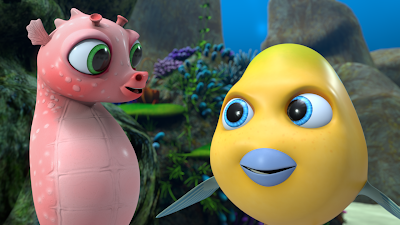 GO FISH PARTY
Maybe you could gather together a few friends and have a Go Fish Party!!  Snacks could be Goldfish Crackers, Gummy Worms, Pretzel Sticks can be labeled fishing poles, a Blue Seas Punch with Sprite and a blue Hawaiian Punch. You could also do a blue jello with Gummy Fish swimming inside. For games you could play Go Fish and Put the Fish in the bowl (Like pin the tail).

5 neighbors will receive their very own copy DVD of Go Fish. Be sure to enter the giveaway.

Gladys Parker said…
I've always had a fascination with octopuses. I think because in the beginning, I was amazed at how many "arms" they had.
November 27, 2019 at 4:43 PM