Every once in awhile I come across a book and I enjoy it so much that I can't help but reach out to the author.  That was what happened when I read The Gryphon Heist by James R. Hannibal.  My family and I all thoroughly enjoyed this book, comparing it to shows like Leverage or the Bourne movies.  It's all that and more.

Out of the more recent author's works that I've read the one I've been the most impressed with is James R. Hannibal.  He weaves a wonderful story intertwined with action, faith, intrigue, humor and more.  I don't know what more I could say so lets get started! 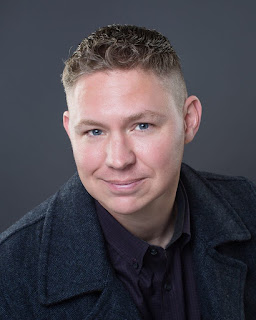 Mercy: Can you share a little bit about yourself?
James: I am a former Air Force lieutenant colonel who studied Middle East Politics and Counter-
terrorism at the US Air Force Academy. My flying background includes the A-10 Thunderbolt
II, the MQ-1 Predator, and the B-2 Spirit (stealth bomber), along with many trainers, light
aircraft, and commercial airliners. My clearances in the stealth bomber and the Predator led me
into all sorts of arenas that now inform my fiction writing—so much so that my first three books
had to be approved by a couple of “program security” offices. After the third, they waved me off
and gave me carte blanche (I had proved I could be trusted).

Mercy: What started your interest in becoming an author?
James: Writing and telling stories was part of my being from an early age. I attempted to write my
first book at age four (a mostly plagiarized story about pandas playing soccer, based on my
favorite book at the time, which was about raccoons playing soccer). My first short story was
read on a small-town radio station at age 11, and I wrote stories in poetry for most of high
school. But, at age seventeen, I joined the Air Force. I did not pick up the pen again until 2007,
after fourteen years of the Academy and active duty. My first effort was Wraith, a stealth
operations story and the book that launched my writing career by getting the attention of world-
famous thriller master Clive Cussler.

Mercy: What do you like to do when you're not writing?
James: When I’m not writing, I’m either flying, working with my Civil Air Patrol cadets, or
developing games for my Lightraider Academy series of games and stories, based on a fantasy
world handed down to me by creator Dick Wulf.

Mercy: How many books have you written? Which is your favorite?
James: It’s always so hard to pick a favorite. Mine is always my last project, but since I’m now
working on two at a time, I always have two favorites. Chasing the White Lion hits the shelves in
March as the continuing story of the elite team of spies and thieves in The Gryphon Heist. But
I’m also working on a new fantasy series. The title is classified, but I’m loving this story. How
many books have I written? Chasing the White Lion makes nine, but numbers ten and eleven are
partially written, and numbers twelve through fourteen are under contract.

Mercy: What is your favorite under-appreciated novel?
James: This is an easy question. The High House by James Stoddard is a fantasy and literary
masterpiece. Stoddard was kind enough to mentor me at the very start of my professional writing
career. He writes on a higher plane than most of us, yet produces work that is totally engaging
and relatable. The High House is a mansion that acts as hub, and perhaps an engine of worlds. To
open its pages is to step through the looking glass. Beware.

Mercy: What advice would you give an aspiring author?
James: Read. Study. Live. When you’ve done all of those, then write, but not before. I meet so many
young writers in their senior year of college, or fresh out of school with their English or
Journalism degree. And they all want to be immediately published by a big house. Here’s the
thing: you’re just getting started. Imagination is fueled by experience. Craft is fueled by long
years of study. One manuscript, which was probably not the story you should have been focused
on in the first place, can quickly absorb five years of your life. Don’t fall into that trap by being
in a hurry.

Mercy: Can you share a little bit about your recently released book- The Gryphon Heist? 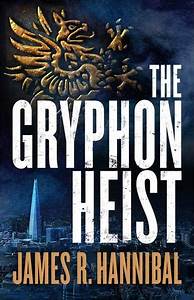 James: The Gryphon Heist is a mash-up of high adventure spy and thief stories. Talia Inger, a rookie
CIA operative and former foster kid, suddenly finds herself conning an elite team of thieves in
the effort to stop the theft and use of hypersonic weapons. With the help of her shady civilian
liaison Adam Tyler, she is trying to convince the thieves they’ve been hired by the very man she
is trying to stop, a dark world figure known only as Lukon. But as the chateau they are using as a
base of operations fills with criminals—hacker, daredevil, wheelman, demolitions expert, con-
woman—Talia begins to wonder who is conning who.
At the same time, Talia struggles with the morality of espionage and questions of
forgiveness. If she is to succeed in stopping an attack on Washington DC, she’ll first have to face
her own past and learn to forgive the man who killed her father. 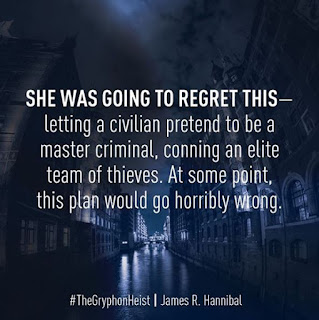