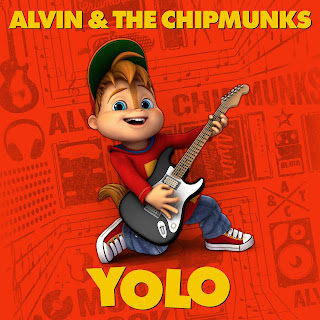 How many of you remember the Chipmunks singing Christmas Don't Be Late?  I do!!  They actually won three Grammys for that song in 1959 for "best Comedy Performance", " Best Recording for Children" and "Best Engineered Recording - Non-Classical".  Well, the Chipmunks released a new album titled "YOLO" digitally on August 30th.  It is available to stream on iTunes.  Did you realize they have been around 60 years?  I did not.

A family owned and operated business for 60 years, the Chipmunks made their debut with the 1958 novelty Christmas song, "The Chipmunk Song (Christmas Don't Be Late)" written and sung by Bagdasarian's late father, also named Ross. The song reached No. 1 on the Billboard Hot 100 Pop Singles chart and won Grammys for best comedy performance and best recording for children at the inaugural Grammy ceremony in 1959. "The Chipmunk Song" was also nominated for record of the year.

While Alvin and the Chipmunks are best known for their various television and movie projects they have also been the number one kids music band of all time with more than fifty million albums sold, including 6 Grammys and 16 gold and platinum albums.

They have starred in three TV series.  The first was in the 1960's.  I was born in 1964, so that was the one I watched.  They then starred in the 1980's and they currently have a very popular series on Nickelodeon.


So, if your children, or you, enjoy the Chipmunks head over and check out their newest release.  Thanks for stopping by today, where neighbors share.