The Secret Life of Pets 2 Releases on Digital Today! 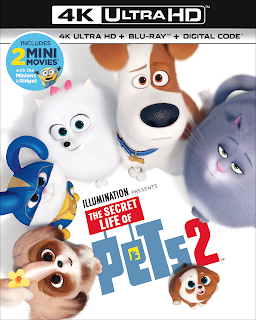 I am sure many of you have seen The Secret Life of Pets 2 in theaters, but today it released digitally and August 27th it will release on Blu-ray and DVD.  Be sure to add it to your collection.

The Secret Life of Pets 2 explores the emotional lives of our pets, the deep bond between them, the families that love them and answers the question: What are your pets really doing when you’re not at home? Terrier Max (Patton Oswalt) is coping with major life changes after Katie’s marriage and the arrival of a toddler, Liam. Meanwhile, Gidget (Jenny Slate) tries to rescue Max’s favorite toy from a cat-packed apartment with a little help from her feline friend, Chloe (Lake Bell), who has discovered the joys of catnip. And Snowball (Kevin Hart) believes, despite the other pets’ teasing, that he’s a superhero after his owner starts dressing him in superhero pajamas. But when Daisy (Tiffany Haddish), a fearless Shih Tzu, shows up to ask for Snowball’s help on a dangerous mission, he’ll have to summon the courage to become the hero he’s been pretending to be.

Brought to you by Universal Pictures Home Entertainment and Illumination Entertainment. There are loads of bonuses on the Blu-Ray and DVD.  You will find, deleted scenes, mini movies, character pods and more.

Rating: PG for action and some rude humor