The Secret Life of Pets 2 - On Blu-ray and DVD 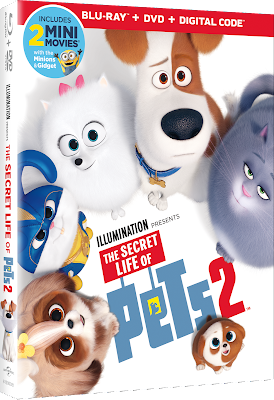 Guess what is available on Blu-ray and DVD?  It's The Secret Life of Pets 2!!  This film begins where the first one ended.  Max and his friend Duke are living with Katie, who is now married and has a son Liam.  While they go off on a family trip Gidget loses Max's favorite toy in an apartment filled with cats.  You will see all your old friends in this new release, including Snowball who thinks he is a superhero.

Universal City, California, July 18, 2019 – The perfect movie for everyone arrives home this summer with the irreverent yet heartfelt sequel to the blockbuster sensation in The Secret Life of Pets 2, debuting on Digital August 13, 2019 and on 4K Ultra HD, Blu-ray™, DVD and On Demand August 27, 2019.  From Illumination, the studio that brought you the original Despicable Me, Minions and Sing franchises, the highly anticipated follow up to the hit animated film led by a star-studded comedic cast reunites all of our favorite Pets and their growing families in a new chapter that explores the deep bond between them and the humans that love them. The 4K Ultra HD, Blu-ray™, DVD and Digital versions of the film are packed with more than 90 minutes* of bonus content only when you own, including two brand new, laugh-out-loud funny mini-movies - Super Gidget, featuring the film’s adorable Pomeranian Gidget and her best friend Max and Minion Scouts, starring everyone’s comical little helpers, the Minions. Additionally included are deleted scenes, DIY and drawing tutorials as well as a special interactive Captain Snowball Motion Comic allowing viewers to direct our boisterous bunny hero on his next move exclusive to the 4K Ultra HD and Blu-ray™ versions!  As the dog days of summer come to an end, join this endearing cast of four-legged friends for a quality movie night of family fun with the film that uniquely reminds us of why we love our own pets and what makes them so very special.


You also get 2 mini movies!  One starring Minions - Minion Scouts and the other Gidget - Super Gidget.  Learn more by connecting with their social media:
Facebook - HERE
Twitter - HERE
Instagram - HERE


Children of all ages will enjoy this adorable, animated film about pets and what they do when their owners are not home.  Be sure to pick up a copy to add to your video library.  Thanks for stopping by today, where neighbors share!