Ever since I heard the news about When Calls The Heart getting a spin-off series (When Hope Calls) I've been ecstatic! I've closely followed along as they've chosen cast members, been filming the first season, and have even had the pleasure of interviewing several of them early on when the news was first announced.

I reached out to Ryan-James Hatanaka who will be portraying Gabriel (The Mountie) about an interview a month or so ago and well, here we are! 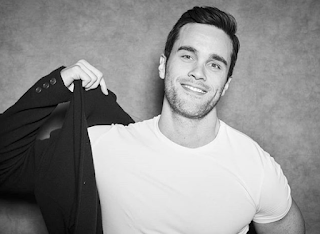 Mercy: Can you share a little bit about yourself:
RJ: I’d love to. I come from a wonderfully diverse family and we’re all really close. Having the opportunity to shoot When Hope Calls just a few hours from where they live, and getting the chance to see them every few weekends has been a real treat.
Other than that, I love sports, the outdoors, going to the theater, movies and traveling.

Mercy: What started your interest in acting?
RJ: In grade 5, I was cast in my first play - a genius little piece called ‘Food for Thought’ about healthy eating habits. The ‘good’ food groups were matched up against the ‘bad’ food groups, with music from the 50s and 60s. It was my first crack and singing, dancing, and acting on stage.
I played ‘Mr. Meat’, and I remember very clearly Jeanne Beker, a Canadian fashion icon, designing my costume. 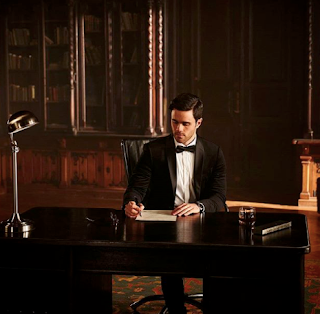 Mercy: What can you tell us about When Hope Calls?
RJ: It’s a lot of fun to work on. Hallmark has put together an amazingly talented cast, and coming to work every day is a huge joy.
The series is set in the early 1900s town of Brookfield, and it really does have something for everyone - action, drama, comedy, romance, plot twists…
There may also be some crossovers in the first few episodes, so Hearties - keep a lookout for some of When Calls the Heart’s finest!

Mercy: What do you love most about your character on When Hope Calls?
RJ: I play Constable Gabriel Kinslow who is the Mountie of Brookfield. I love that he’s constantly tasked with getting to the bottom of the mysteries that unfold in the town.
In Canada, the RCMP has a proud tradition. Since taking on this role, I’ve had the privilege to connect with, and learn more about the men and women who put their lives on the line for us every day. I’m inspired by the work they do on our behalf. 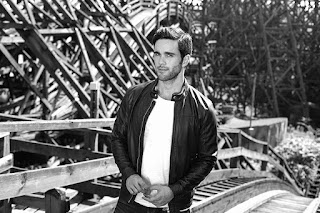 Mercy: What is one thing most people don't know about you?
RJ: I have a background in many different sports, including a blackbelt in karate. That skillset has really benefitted me in the industry, and over the years I have developed a love of fight choreography. I often work in that capacity in New York City.

Mercy: Is WHC your first period piece? If so, what is the biggest
difference between doing WHC and a present day show?
RJ: While working toward my MFA from New York University’s Tisch Graduate Acting program we did many period pieces from Greek tragedies to contemporary works. It’s a very exciting, comfortable thing for me.
While When Hope Calls is set in the early 1900s, the themes that run throughout are timeless, and the characters feel very accessible. I think Showrunner Alfonso Moreno and his team of writers have done a great job at making the show exciting for a variety of audiences.

Mercy: What is the most rewarding part of being an actor?
RJ: It’s a business of relationships. I’ve never been on a set or in a play where I didn’t make some great, long lasting friendships. I also love interacting with the audience. Bringing them something they can connect with is very rewarding.
One of the first things I heard when I was cast in WHC is that the Hearties are an unbelievably supportive, hugely invested community. I’m so excited to be part of it.

Mercy: What actors have influenced your own acting?
RJ: I really appreciate Hugh Jackman. He does theatre, film, musicals,
comedy, drama, action, period pieces, romance - I love the diversity of roles he chooses.
Additionally, a few years ago I was cast alongside John Lithgow and Annette Bening in Shakespeare in the Park in New York. Their presence, their preparation, their commitment to each moment, and how they treated others, resonated with me.

Mercy: If you got the chance to choose, who would be your dream cast for a movie?
RJ: Everyone who’s onset with me right now.
The When Hope Calls cast is a pretty hilarious group, and I would love to shoot a comedy with them one day.

Mercy: What do you like to do when you're not filming?
RJ: I’ve always got something in development - whether it’s something I'm writing, acting in, or choreographing. I’m writing a new script right now that I’m very excited about.

Mercy: Is there a fun story you can share from on set of When Hope Calls?

RJ: There are quite a few Toronto Raptors fans in the cast and crew. The night they won the NBA Championship, we were in the middle of an overnight shoot.
As the clock ticked down in the game, we took a short break from filming and all crowded around one cell phone - maybe thirty or forty of us.
When the clock hit zero, we erupted in hugs and cheers, before getting right back to work. It was a special night. 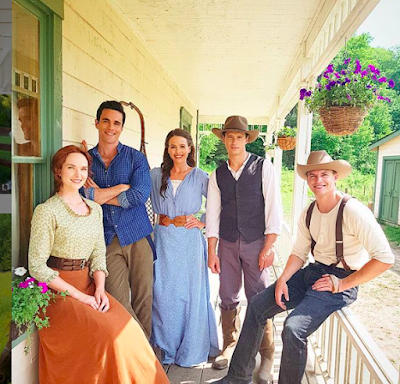 Mercy: If you weren't an actor what would you do?
RJ: Definitely something creative. Writing, producing - I love piecing together stories.

Mercy: Any other upcoming projects you can share about?
RJ: Lots of other things in the works - stay tuned!

Friends, please be sure to click through the links below and follow RJ on social media to keep up with his work, plus see all the fun photos he's posted from the set of When Hope Calls! He is an extremely talented actor and while I am rather impatiently waiting to see his character on When Hope Calls, I'm also hoping Hallmark will cast him in some other movies as well (Just putting that out there- haha). 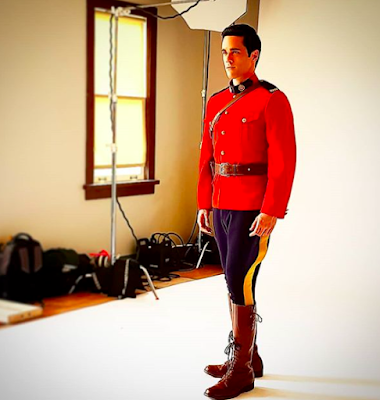 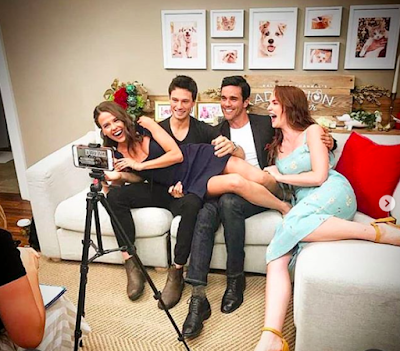