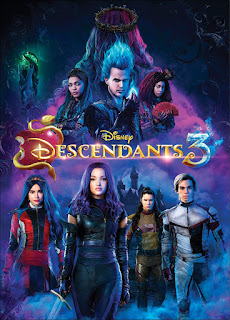 Descendants 3 released this past week on the 6th.  This is the third in the series of movies, but is the first I have seen.  Remember that this is a teenage musical.  Throughout the movie they burst into song and dance.

The music and dancing are definitely not my cup of tea, but I was impressed that this was kept a G rated film. The stars of Descendants go back to Isle of the Lost to bring back new recruits to join them at Auradon Prep.  There is one scene, that might be scary for young children early in the movie. So, the idea is these are all descendants of Disney villains.  Mal, Evie, Carlos and Jay are known as VKs or Villains Kids.  Once again the group of teens must save Auradon.  Will they succeed?  That would be telling.

The DVD Descendants 3 comes with a Blooper Reel, Deleted Scenes and a Short Story: Descendants Under the Sea.  If you have already seen the first two movies in the series, I am pretty sure you will enjoy the 3rd installment.