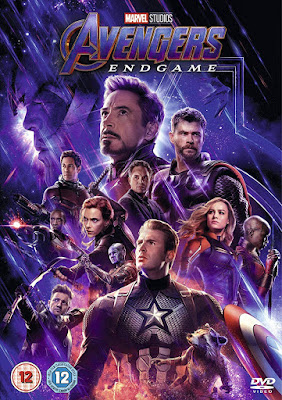 Most of our readers have probably already seen the epic movie Avengers Endgame that was just recently released on DVD. Our family is a fan of the Avengers, and we have followed the MCU through the many phases and were very excited about this next (and final, at least for the original Avengers) installment. We had heard mixed reviews, although most were positive, so we were hoping for the best when we finally got to see it.

Without giving away spoilers (just in case somebody still hasn't seen the movie), the plot line picks up immediately after the events of Infinity War, with half of the world's population dusted. Iron Man and Nebula do make it back to earth (surprise, right?) and the remaining team members travel to fight Thanos. Needless to say, this fight doesn't result in the hoped-for outcome, which leads to a five year gap and we pick the story back up as the team has scattered to various places. The rest of the movie is the reassembling of the surviving team members for the final showdown between Thanos and the Avengers, as well as the struggle to figure out a way to bring everybody back who had been dusted.

Our family absolutely loved this movie. My dad actually said it's his favorite of the MCU movies, which is high praise seeing as how he wasn't overly thrilled with the plot line/follow-up to Infinity War. I'm not sure I'd say it's my favorite, but it definitely ranks in the top few, with some of the best battle scenes and thrilling moments in any Avengers movie. I have to say, for me, the best moment is when Captain America wields Thor's hammer...as a Captain America fan, this was my favorite scene in the entire movie. Cap is always the Avenger with undisputed integrity and honor, and I love that they honored his character in this way. (No offense to any of the other Avengers, I like them all...Cap just has that extra "good guy" gene). There was only one disappointment for me in the movie, and that was the "Grieving Man" scene. First, I'm disappointed that they would put a controversial subject like this into a family movie at all. Secondly, for it to be Captain America who praises/encourages the man for his moving on, continuing to date men, etc, is so out of character. If you consider the timeframe he grew up in as well as the strong moral standard he has, it seems pretty obvious that he would be the last team member to approve of or condone this man's homosexuality. As I said, this was the only scene I didn't care for, so we know to simply skip over it from now on.

For me, this movie was the perfect way to end this phase of the MCU. There are the funny moments and witty banter between team members that we all enjoy, obviously the battles are monumental, and there are some tender, emotional scenes as well. Seeing Tony Stark as a father, the deep bond of friendship between Hawkeye and Black Widow, how the loss of part of the team affected each member, the unswerving loyalty to each other and doing the right thing...without doubt, this movie is a fitting tribute to each and every member of the Avengers. I did enjoy that the focus was mostly on the original Avengers, while still giving spotlight to each of the newer members. It definitely leaves you feeling excited about the future of the MCU!

If you are interested in purchasing the Blu-ray/DVD, you will find it is filled with extras.

BONUS MATERIAL (may vary by retailer):
Digital Exclusive:
Blu-ray & Digital:
Here is one of the deleted scenes for you.