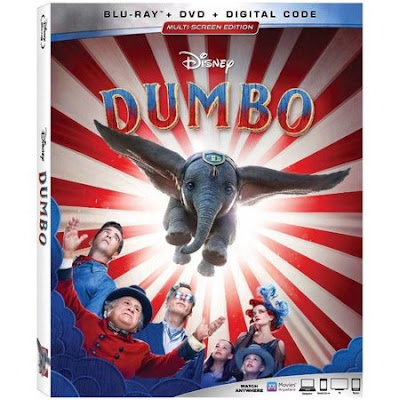 Great to see you today!  It's a beautiful, yet hot, day today here, At the Fence.  We have some errands to run today, but before I head out, I wanted to share with you about Disney's Dumbo.  It just recently released on Blu-ray, DVD and digital.

Before we get into the review, I will tell you that I was raised on the original Dumbo, and after seeing the new release, I am still an original fan.  I will tell you why here.  First off, they use 3 swear words in this movie and one almost comes out.  I haven't decided yet whether they were aiming this for children or adults.

Now, beyond that, I was impressed by the CGI used to make Dumbo fly.  The storyline itself gets a little lost almost in whether the father, Holt, recently returned from war missing an arm will connect with his children Then you have the relationship between Holt and the trapeze artist develop. And of course will Dumbo get reunited with his mother Jumbo.  Amidst all this going on V.A. Vandevere, played by Michael Keaton is the evil owner of a huge amusement park that wants to use Dumbo to get his park out of debt.  He is of course willing to use underhanded means to get what he wants.

I don't want to spoil the end for those of you who still have not seen Dumbo.  My recommendation is if you are going to watch it, do not expect what the original gave.  Both my daughter and I said it was an interesting watch, and yes we viewed the entire movie, but we came away feeling something was missing.

For this review, the movie has already released in stores, so you can easily find Dumbo at your local retail store.  Thanks for stopping by, where neighbors share! See you again soon!