How many of you have already seen Captain Marvel?  Captain Marvel actually released last week on DVD on June 11th, but I did not get the opportunity to see it until this week.  Anyway, we have a player that takes out swear words, so the family was able to sit down and with this together.  If you haven't seen it yet, you might want to get a copy for yourself. The spectacular, 1990s-era Super Hero adventure, which electrified and inspired audiences worldwide and surpassed $1 billion in ticket sales, is available on Digital in HD and 4K Ultra HD™ and Movies Anywhere May 28, and lands on Blu-ray™ and Blu-ray 4K Ultra HD™ June 11.  Bring home the first female-led franchise film that launches audiences higher, further, faster, centered on Carol Danvers a.k.a. Captain Marvel. 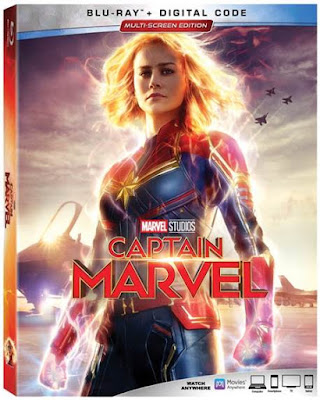 After hearing mixed reviews about Captain Marvel, yet still curious about how it would be, I popped it in my player and gave it a viewing.  As most movies are that introduce a character by giving the backstory, Captain Marvel takes a few minutes to get into the story, but the film delivers as far as I am concerned and does not deserve some of the negativity that has surrounded it.
The actress Brie Larson does a fine job as the female superhero, providing a good balance between humor and seriousness.  And the roughly two hour movie has both.  While not having as many funny scenes as Guardians of the Galaxy and some of the other Marvel blockbusters, Captain Marvel has enough to crack a few smiles and lighten the mood when necessary.  The action scenes are plenty including a fantastic fight scene aboard a train and some battles that take place on space ships.  Fans of science fiction will be doubly pleased with the feature as it includes  alien races, beings that can change shapes etc.  The special effects are as good or better than expected and are right in line with other movies in the Marvel Universe.


And to bring in a popular character from the Marvel films and finally include his backstory, was a smart move on the part of the writers.  This character, (no spoilers here, sorry), added some fun and flavor to the movie.  The ending satisfied as so few movies do these days.  So sit back and enjoy Captain Marvel.  You will be glad you did.

If you want to share your opinion, please do so in the comments.  Thanks for stopping by where neighbors share.