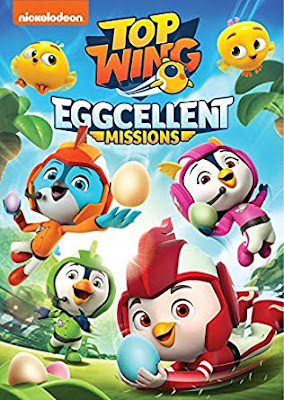 Here is another GREAT DVD set for your young ones.  Top Wing Eggcellent Missions is from Nickelodeon and Paramount.  This series released on DVD on March 5th with a suggested retail price of $10.99.

Young fans can join the Top Wing cadets on 8 egg-citing missions!!  They will save Sandy Stork's eggs, recover their vehicles from Cheep and Chirp's cousins and so much more.  Including are some fun stickers! Run time is 97 minutes.

What little one would not enjoy watching this adorable birds as they race to the rescue.  You can find Top Wing Eggcellent Missions on Amazon.

Enter the giveaway below for the Top Wings Eggcellent Missions DVD set.

I received this DVD set for review purposes all thoughts and opinions are my own.