Our Fight With Raccoons

Some of you may remember me mentioning our fight with raccoons not too long ago.  Well, it is still going on!  There is apparently a family living in the crawl space above part of our home.  It is a little creepy to listen to them scratching around above your bed and having minor skirmishes.  I have been asleep and startled awake to them screeching at each other.  I think I mentioned the first time they did this I was positive something was in our bedroom.  They were also raiding our trash cans, even pushing the lids off when we put bricks on them. 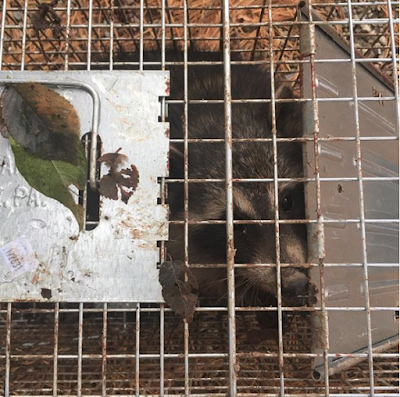 So, we had a couple of humane traps and trapped 8 of them, along with a possum.  No, not all at the same time.  Unfortunately we found out that we were not taking them far enough away.  So we actually may have caught a couple more than once, although we have since been told that once a raccoon is caught in a trap that he won't fall for it again.

Move forward a few weeks.  Our friend came up and repaired our roof where the coons had torn an opening to get in.  We figured, no more problems....we were wrong.  We continued to have our trash raided and to hear them in the ceiling.

Next step hire a pest removal company.  Guess what?  The closest one we could find is about an hour away and they charge mileage every time they come. This is where it gets a little frustrating.

First day he arrives and brought one trap.  Yes, you read that right, one trap.  We told him we heard raccoons, plural and that there was fighting, but he only brought one trap.  So, he added one of ours and placed them in the crawl space over the shed, since that is easily accessed and connects to the home.  My husband checks the traps in the morning, one raccoon and one empty, unsprung trap.  Our trap worked and the one he brought did not.  He could not get it to spring either.  So we paid for someone to drive an hour and set up our trap to catch a raccoon. When he picked up the raccoon he set some new traps he had brought.  This time he caught one more raccoon and another trap was missing the bait and was sprung. 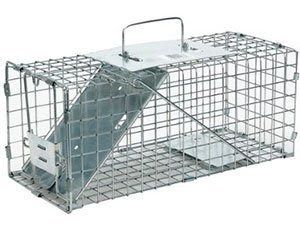 Since then he has reset the traps only to have them empty and minus the bait.  So these coons are getting the food out and somehow not spring the trap until after.  Fast forward to this past Tuesday.  My husband checked the traps and they are empty and have been tipped over and moved some.  We called and he came out again to reset the traps with bait.  Well, this morning the one he set out beside our trash cans was once again minus the bait and was closed.  No raccoon.  Our trash was all over the place.

So, I think the raccoons are winning the war.  Not only are they avoiding capture, we are feeding them all kinds of nice treats.

As far as the company itself goes, I am not impressed.  He arrived with one broken trap.  He has consistently arrived late.  The first raccoon that was trapped he left there for an extra 24 hours because he was busy and didn't think he could make it here in time and back to where he needed to be. Oh, and he also said they could not go into the crawl space above our bedroom, because to do so he would need to remove two small pieces of siding and remove 6 screws from the board behind it.  This was designed as an entry to the crawl space.  Even if my husband removed it, he said he probably would not do it.  I wish we could have found someone else, but apparently anyone else is even further away.  A company that uses the Pocomos software would be nice.  Perhaps a little more organized. 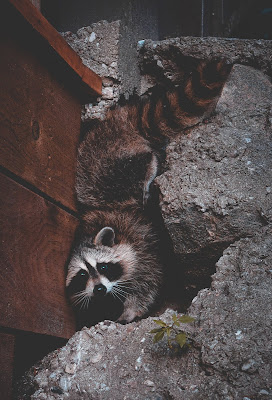 Who knows which one of us is going to win this battle.  Right now I would say the coons are ahead and we are just waiting, with baited traps.