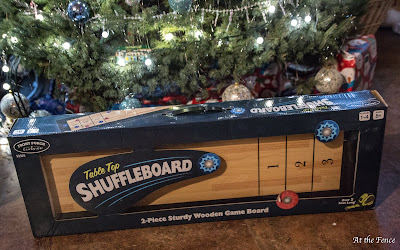 First of all I have to state that I am impressed by quality of the game.  The game board is wooden and comes in two pieces that use magnets to connect. There are 8 small feet to attach to the bottom of the game, that allows you to adjust the height slightly.  When connected together the shuffleboard is 5 ft. long.  As the name reveals, the game is designed to be played on a table-top.  The plastic pucks have metal balls inside that roll smoothly along the board.  Two metal pins are included for keeping score along the side of the board. 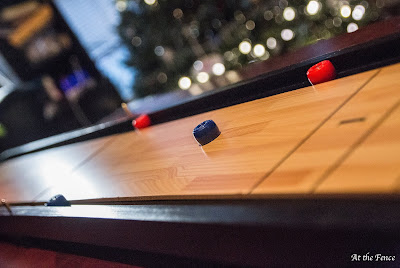 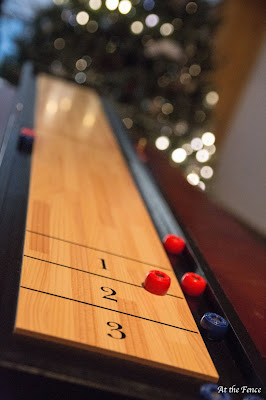 That being said, Table Top Shuffleboard is ready to provide a great time of family fun and can be played by two or four players.  The object of the game is to be the first player/s to score 15 points.  Points are gathered by sliding the small colored pucks into the score zone, numbered sections labeled one, two and three. Sounds easy?  Did I mention that part of challenge is to slide the pucks but not allow them to fall off the end or the sides of the board? 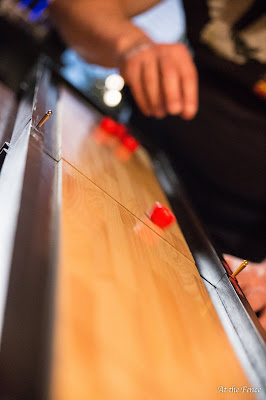 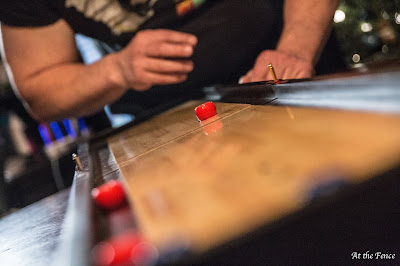 The two player game is designed for both players to alternate turns, shooting from the same end, while the four player game has two players on each team, with one person from each team standing at the opposing ends of the board.  Other options are the Baseball Game variation where the game is played in nine innings, with the highest score being the winner and the Horse Collar variation, which has each player sliding all eight pucks and then after both players take their turn, the points are added up and the one with the highest score wins.  The Solitaire Game allows one person to play and the game ends when ten rounds are played or when fifteen points are scored, whichever occurs first. 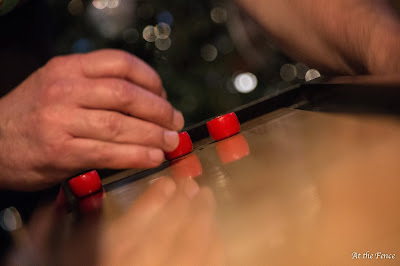 Sure is fun and a great way to spend some time with family in this day when most games are played with a joystick!  My recommendation, get away from the electronics, gather up a crowd and get busy with Front Porch Classics Table Top Shuffleboard!

Thank you for stopping by!