We recently had the opportunity to visit the St. Louis Zoo.  Yes, it is winter, but we managed to hit one of those weekends where there was no snow, and you could actually go outside without a jacket.  It was actually pretty nice out, and apparently some other St. Louis residents thought so too!  I was amazed to find out that the zoo is free.  Yes, I said FREE!  There are some options you have to pay for, but to wander the zoo and see the animals is totally free.  A few things there is a fee for is their train, which will take you to different areas of the park.  Yes, we took advantage of this to get from one side of the park to the other.  Nice little ride, that gives you a chance to just sit back and enjoy the view.  A few shows and tours also require a fee.

I honestly enjoyed the Saint Louis Zoo, more than many other zoos we have visited.  The paths are laid out with enough room, to allow several people going in opposite directions.  There are plenty of signs so you know where you are headed to.  The employees we spoke to were all very pleasant when we needed to ask where something was located.

The best part of the park of course are the animals.  Although we did not see any primates out, we saw many interesting and entertaining animals.  Our first stop was Centene Grizzly Ridge, where we saw two HUGE grizzly bears.  One was just sitting, looking around and the other was enjoying a bath. 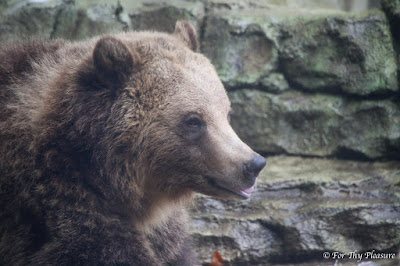 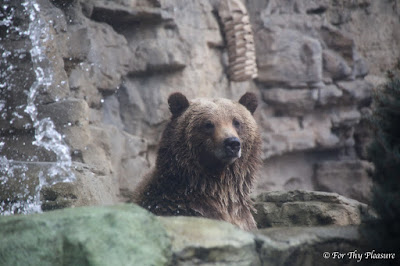 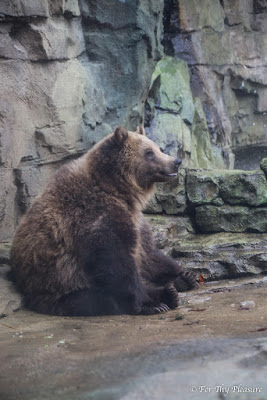 Next we moved on to the Penguins.  I personally love to watch them.  We were actually splashed a couple of times by one that was swimming around, and another that was leaping out of the water and then splashing down. 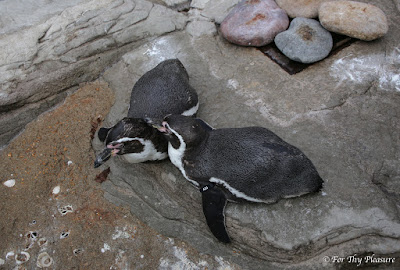 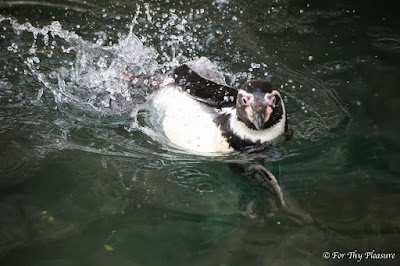 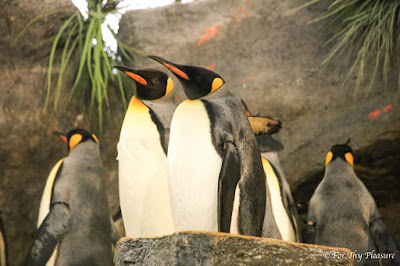 We moved on to the next section of the zoo, which was set up for Polar Bears.  It was so fascinating to stand there and watch the one as he/she swam back and forth.  He would go to one end, then spin around an head for the other end.  He often came up for air, and you could see the bubbles as he released air underwater.  I think we could have stayed there for hours, if there wasn't so much else to see. 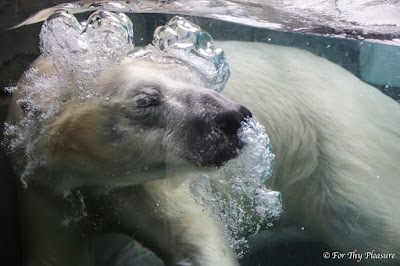 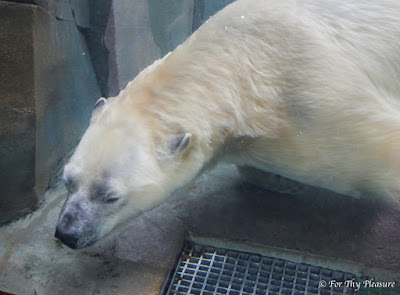 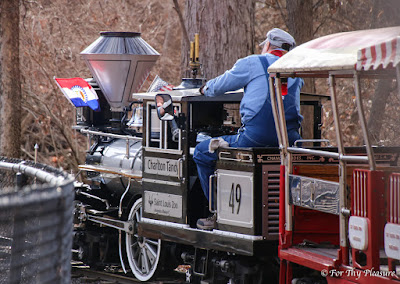 After exiting the train we followed a short trail that was going to lead us to more animals.  I have to tell you a little about this trail though.  Remember I said it was winter?  Well this are has water, rocks and some waterfalls, and because it was the first nice day in several days, some of it was still frozen.  It was beautiful!! 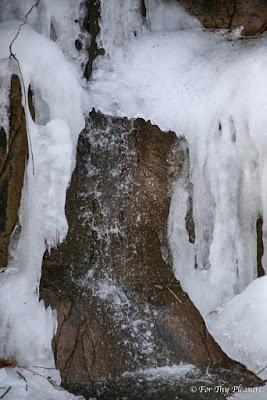 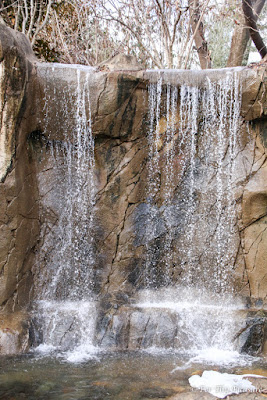 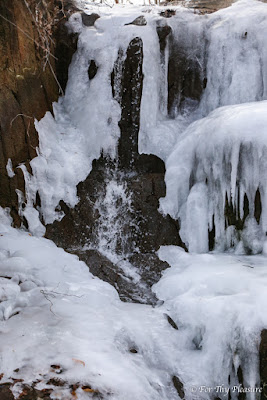 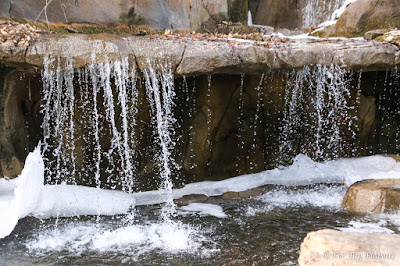 These guys below were sound asleep.  It is hard to even see the second one. 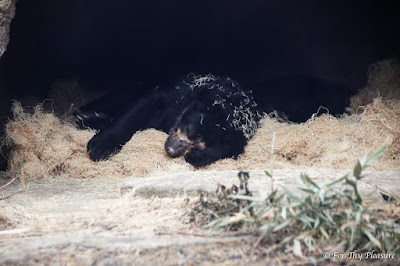 The Bush Dog was a little more active.  He would run out, look around and then take off again.  Check out the teeth on the little guy though.  I do not think I would like to get him mad. 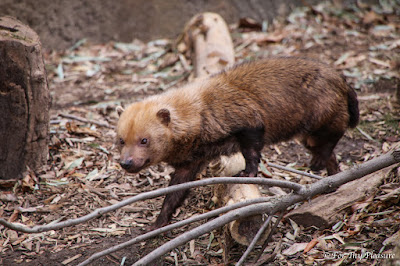 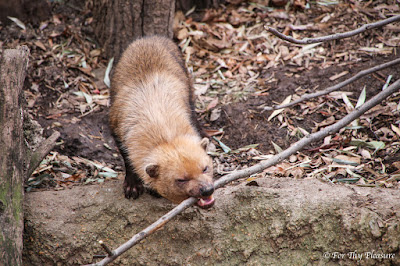 You can find the Rhino in the River's Edge section of the Saint Louis Zoo. 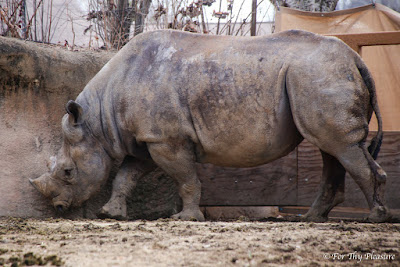 This is the Painted Dog.  He reminded us a lot of the Harlequin rabbits we used to show years ago. 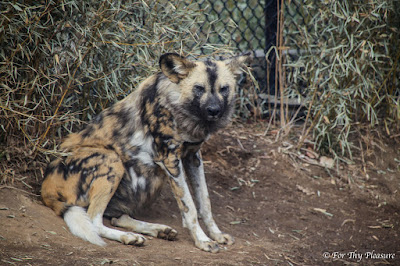 Anyone ever heard or sung the song, "I Want a Hippopotamus for Christmas"?  After seeing them up close, I am voting no.  Although interesting to watch, they do not look like my idea of a pet. LOL!! 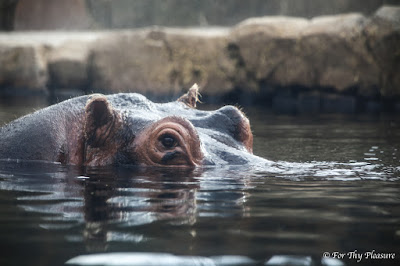 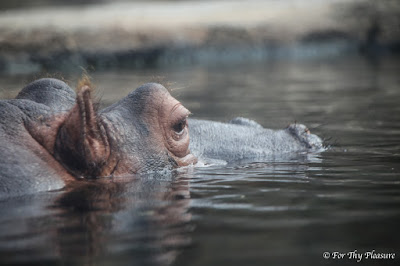 We did spend some time watching the elephants. 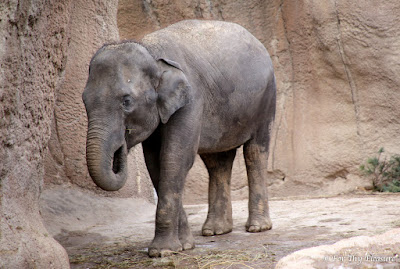 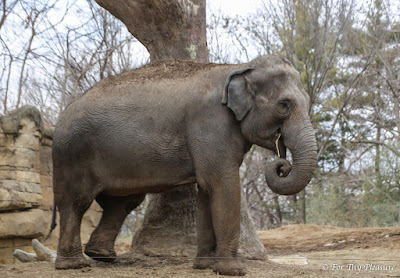 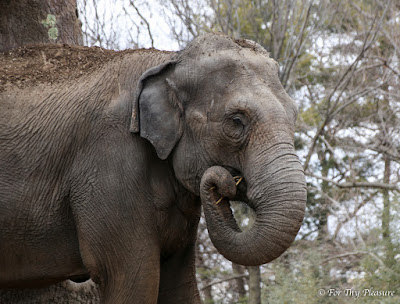 Now, I want you all to know, that this is just a portion of the zoo that we saw.  There were several areas that we did not even make it to, so I am hoping to take another trip and finish our exploring.  We completely missed the Red Rocks, Historic Hill, and the Insectarium.  I do want to share a couple other animals/birds that many people at the park found just as fascinating as the others that they came to see. 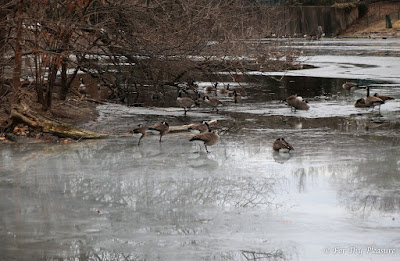 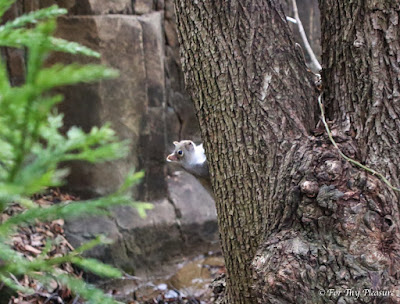 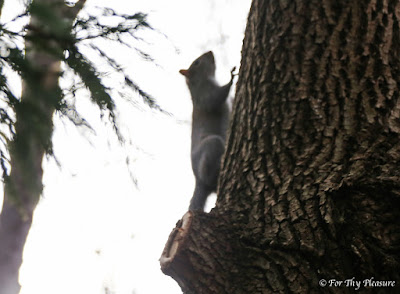 Now, the zoo offers other activities and programs as stated before.  The day we were there, you could Adopt a Sloth.  I was very tempted!!  You can rent strollers and wheelchairs if needed.  They have restrooms scattered through the park, as well as gift shops and places to eat.  Yes, we wandered one of the larger shops.

If you live in Saint Louis, or are visiting the area, be sure to take some time to visit the Saint Louis Zoo.  It is definitely worth your time.  Plan on spending a few hours so you have time to see everything.  Or, you could take two trips!  We really enjoyed our time there, and would LOVE to go back in the future!  You can find out more about hours of operation and other information visit the website, HERE.

See you next time! At the Fence


** Please not that the watermark on the photos "For Thy Pleasure" is my own watermark from my photography.  All pictures are mine.**