By At the Fence September 05, 2017
Many thanks to Propeller Consulting, LLC for providing this prize for the giveaway.  Choice of winners and opinions are 100% my own and NOT influenced by monetary compensation.  I did receive a sample of the product in exchange for this review and post. Only one entrant per mailing address, per giveaway.  If you have won a prize from our sponsor Propeller /FlyBy Promotions in the last 30 days on the same blog, you are not eligible to win.  Or if you have won the same prize on another blog, you are not eligible to win it again.  Winner is subject to eligibility verification. 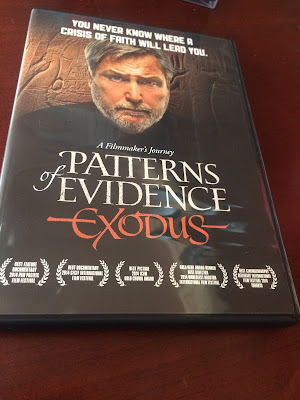 I was recently given a copy of Patterns of Evidence Exodus.  In this film/documentary Tim Mahoney is seeking evidence that Exodus is historically true and actually occurred.  On his first trip, he was extremely disappointed in the responses that he received.  He then spends 12 years researching, talking to experts, and visiting historical sites.

You can easily sit down and watch this with your family and/or friends.  The film itself presents the evidence, from which you can then draw your own conclusions.  Narration is very well done by Kevin Sorbo.  You will be amazed at some of the expert testimony and even guest appearances by Benjamin Netanyahu and Shimon Peres.  Run Time is approx. 119 minutes.

There is a Bonus DVD, that includes Cast Bios and Interviews, Behind the Music, From Film to Book, Host a Movie Event Trailers, and English Closed Captioning.

About the author/filmmaker/producer
Tim Mahoney founded Mahoney Media Group, Inc. (MMG) in 1989. MMG focused its business on television and video production for regional and national companies. In 2014 Tim founded Thinking Man Films & Media as an international documentary & publishing company with a focus on education and the Bible. Tim produced numerous productions for Christian organizations including the Billy Graham Association, World Wide Pictures, and Compassion International. Tim also served as the President of the board for the International Christian Visual Media Association (ICVM). Tim’s first full feature documentary film, “PATTERNS OF EVIDENCE: THE EXODUS”, released in January 2015. The film took 12 years to develop and takes a scientific approach to investigate the events of the biblical Exodus. The overall vision for his film company is to explore “patterns of evidence” that support the biblical narrative and engages the world in a conversation. The film takes a balanced approach and leaves the audience to decide for themselves if the Bible is real history or myth.

Take a moment to visit this website, www.patternsofevidence.com to view the trailers, and to obtain more information.

Thanks for stopping by today!

Unknown said…
Thank you for your great review of our film. We appreciate it and glad you enjoyed it- along with some of your readers too hopefully!
We wanted to let you know about our 'Thinker Updates' since you are a Bible enthusiast. They include fascinating research & finds with new evidence related to the Bible, plus more . We typically send them out once a week and then archive the blogs for reference & pleasure reading. You can sign up here to become a 'Thinker' http://patternsofevidence.com/blog/2016/01/01/sign-up-for-thinker-updates/
September 28, 2017 at 2:27 PM