We received the opportunity to work with Krusteaz.  Now, my family LOVES having breakfast for dinner.  We actually do this several times a month.  My husband and I had to go out of town, so the girls planned a Breakfast for Dinner Girl's Night!  They really had a lot of fun.  Krusteaz sent us several goodies to help with our dinner for breakfast.  If you follow me on Facebook, you might have seen the picture I posted when it all arrived.  See below. 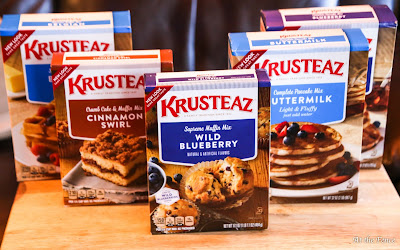 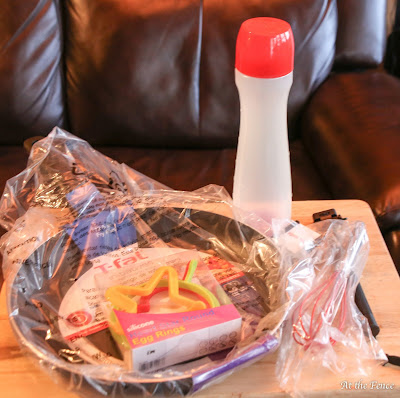 From Krusteaz we received 2 boxes of Wild Blueberry Muffin Mix, 2 boxes of Buttermilk Pancake Mix, 2 boxes of Cinnamon Swirl Crumb Cake and Muffin Mix, 2 boxes of Blueberry Pancake Mix, 2 boxes of Belgian Waffle Mix as well as the other goodies.  The girls were really excited because the muffin mix had a can of blueberries, rather than the dried chips of blueberry.  They also sprinkled raw sugar on top of the muffins!!  Now, I have to tell you, my daughters very seldom make plain pancakes.  So when they went shopping, they picked up bananas, nuts, pumpkin and whipped topping.  They also purchased hash browns, eggs and a few extras to add to the egg, sausage, green chili, slow cooker casserole that they made.

So, they used the Krusteaz Buttermilk Pancake mix first and added banana, chocolate chips and nuts to the mix.  Once they cooked the pancakes, they added melted, drizzled peanut butter, extra chocolate chips, banana slices and whipped topping. 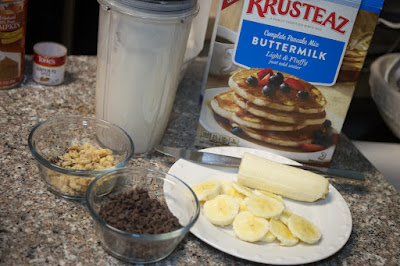 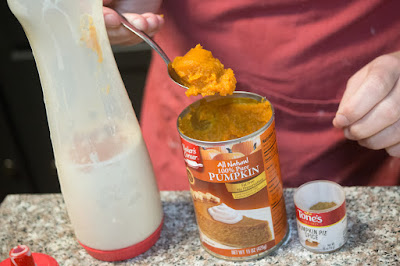 And then they made up some of the Blueberry Pancake mix.  One of the girls really prefers blueberries in her pancakes. The mix has dried berries in it, but she said they tasted really good.  As a matter of fact, she is thinking of whipping some more up tonight!

One of the girls did a fried egg using the shapes that we received.  She did a heart shaped egg, with Colby Jack cheese on toast. 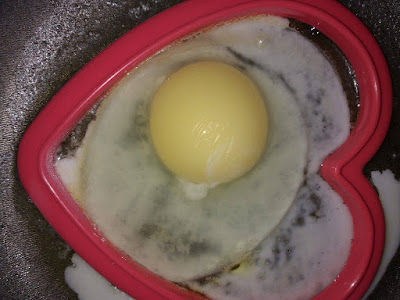 The hash brown casserole is made with hash browns, cream of chicken soup, sour cream and shredded cheddar cheese.  Sometimes we add onion and green pepper.  This was baking in the oven while they worked on the pancakes.


Along with their pancakes, they made the Egg, Sausage, Green Chili Casserole. They had prepared the casserole and started it in the slow cooker so it would be done in time to eat with the rest of the meal.


Now, they really enjoyed their meal, and then spent the evening doing each other's hair, painting nails and watching a video or two.  Of course they sent me some pictures to drool over!  After we returned home, they did make another batch of the Blueberry Muffins for us to try.  Delicious!!

Tomorrow we are having the Cinnamon Swirl Cake.  They just had so much food, that they did not even try making this one.

As I said above we enjoy having #BreakfastNight.  Sometimes it makes preparing dinner a lot easier. Not to mention using the Krusteaz Complete mixes are a breeze!  Does your family ever have breakfast for dinner?  What types of foods do you serve?

One neighbor is going to receive a really nice box from Krusteaz by winning this giveaway!  Be sure to enter and then share this giveaway!  Thanks for stopping by today!

Maria's Space said…
Those pumpkin pancakes look amazing. Bet they tasted as good as they look
February 5, 2017 at 12:02 PM

janetfaye said…
I like Blueberry pancakes with maple syrup for dinner.
February 5, 2017 at 2:04 PM

[Whatever U are, be a good one!] said…
I love waffles, pancakes and peanut butter
Thank You for the chance!

Anonymous said…
Our favorite is pancakes and bacon. Sometimes you just need to have breakfast for dinner.
February 5, 2017 at 3:26 PM

ewhatley said…
my favorite is spinach, cheese and bacon omelet, hashbrowns and biscuits
February 5, 2017 at 4:34 PM

Anonymous said…
I love my pancakes and sausage as breakfast for dinner!
February 5, 2017 at 6:40 PM

tscatterton57 said…
I have to scarmabled eggs bacon biscuits & grits or pancakes
February 5, 2017 at 7:31 PM

carolwegs said…
I love to have french toast for dinner. Thanks for the chance
February 5, 2017 at 7:42 PM

1froglegs said…
Omelets or egg burritos are my favorite because they are usually too time consuming to eat for breakfast.
February 6, 2017 at 12:55 PM

kelly tupick said…
My favorite breakfast for dinner meal is blueberry pancakes with a side of sausage.
February 6, 2017 at 1:03 PM

Ty Beth said…
Our favorite breakfast for dinner meal is waffles and sausage patties with fruit.
February 8, 2017 at 8:47 AM

Annmarie Weeks said…
We love to have scrambled eggs with cheese, with hash browns and bacon & toast!
February 8, 2017 at 12:43 PM

Wendy ArtsyChaos said…
We like to have waffles for dinner!
hiwendyhi at yahoo dot com
February 11, 2017 at 1:51 AM

Unknown said…
I love chicken and waffles for dinner! Such a fun and delicious combo! We like to have fresh fruits as the sides!
February 12, 2017 at 10:47 AM

Renee said…
Scrambled eggs with cheese, toast with gravy, and fresh fruit is one of my family's favorite breakfast dinners.
February 13, 2017 at 10:03 PM

Kim Reid said…
I love having waffles or an omelette for dinner, always a special treat!

Jessica said…
My favorite breakfast for dinner is french toast and bacon.
February 17, 2017 at 1:11 AM

Stacy said…
I like breakfast for dinner. A regular item is a poached egg, cheese slice, and Canadian bacon in an everything topping bagel.
February 17, 2017 at 8:20 PM

Stacy said…
I like breakfast for dinner. A regular item is a poached egg, cheese slice, and Canadian bacon in an everything topping bagel.
February 17, 2017 at 8:21 PM