By Hope August 18, 2016
If you're anything like me, then you are anxiously waiting for fall. Cooler weather, the color changes outside, boots and sweaters, our annual trip to Pigeon Forge, and of course, Starbucks' popular pumpkin spice-flavored coffees! Last year was actually the first time I ever tried the pumpkin spice latte at Starbucks (I don't know why I never tried it before!), and with the first sip I was hooked. I'm not much for hot beverages even in the winter, so I stuck with the iced lattes and frappuccinos, but the pumpkin spice flavor quickly became a favorite. Now, there are two problems with being a pumpkin spice coffee fan. Number one, Starbucks (and most other coffee shops) only carry this flavor in the fall. Which means the other 7-9 months of the year (depending on how long your local cafe has it available) you're totally pumpkin-less. And number two, the cost of an iced pumpkin spice latte can be expensive-especially when I could easily down a couple a day! So, since going for three quarters of a year without one of my favorite beverages is a dreadful thought, and I can't spend all my savings on Starbucks every fall, of course it became obvious that I needed to find a way to make this delectable drink at home. I browsed online and found a few recipes, took some of those and came up with my own - and even THM-ified it - and now I'm sharing it with you, so that you too can enjoy the pumpkin spice iced latte year-round, at a much lower cost, and it's even healthy! (For those not aware, THM is Trim Healthy Mama, a healthy eating plan). It's very simple, only needs a few ingredients, and you can actually make a double batch and store the "syrup" in the refrigerator so it's even easier to make for those mornings you're in a rush! 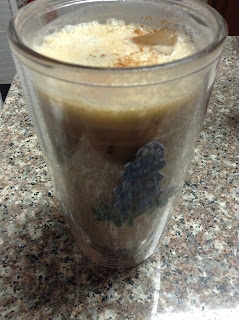 Ingredients:
1 cup Half and Half
2-4 tablespoons Splenda or sweetener of your choice (I like mine sweet, so I go more towards 3-4 tablespoons)
2 tablespoons Pureed Pumpkin
2 tablespoons Vanilla Extract
1/4-1/2 teaspoon Pumpkin Pie Spice (adjust to your tastes, just be aware PPS is rather strong, so start on the lower end and add more if needed).
1 cup of strong black coffee or 4 shots of espresso at room temp.

Directions:
In a small saucepan, combine half and half, splenda and pumpkin puree, cook on low just until dissolved and blended.  Remove from heat, add vanilla and pumpkin pie spice. Pour into a blender and whip for 15 seconds or until foamy. Divide into two cups over ice. Pour half cup of coffee (or 2 shots espresso) into each cup. Top with whipped cream and a dash of cinnamon. Or, if you're only making for yourself, store the other half of the syrup in the refrigerator and you're ready to go tomorrow morning! 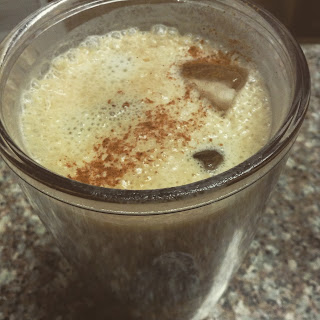 Cassandra Holdeman said…
I LOVE, LOVE, LOVE the pumpkin spice lattes. Definitely adding this to my THM drinks. I never thought to warm the ingredients to melt the sweetener. Thanks!
August 20, 2016 at 2:13 PM