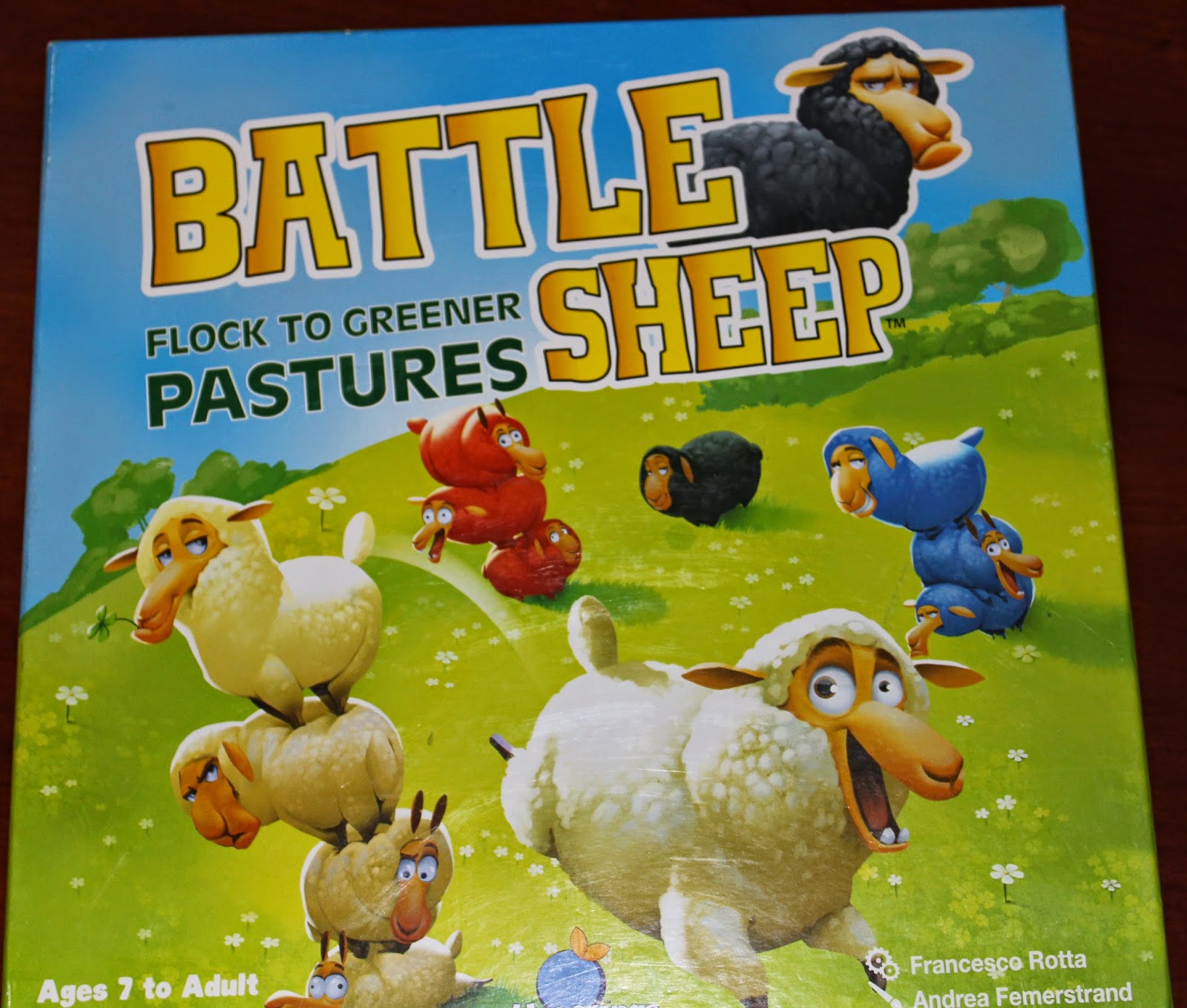 We are brining back our game night feature, sharing some of the games we play on our family fun nights.  The first game I am going to share here is called Battle Sheep by Blue Orange Games.  Now, before I even begin telling you about this game I have a confession.  I received this game a few months ago and after looking through it when it first came in I put it on the back burner and basically forgot about it.  Fast forward now and let me tell you we pulled Battle Sheep out and it has become a favorite for the females of this family.  Now, that is not because the males don't like it, but because it only has 4 players we usually do not pull it out when the whole family plays.  (There are 8 of us.) 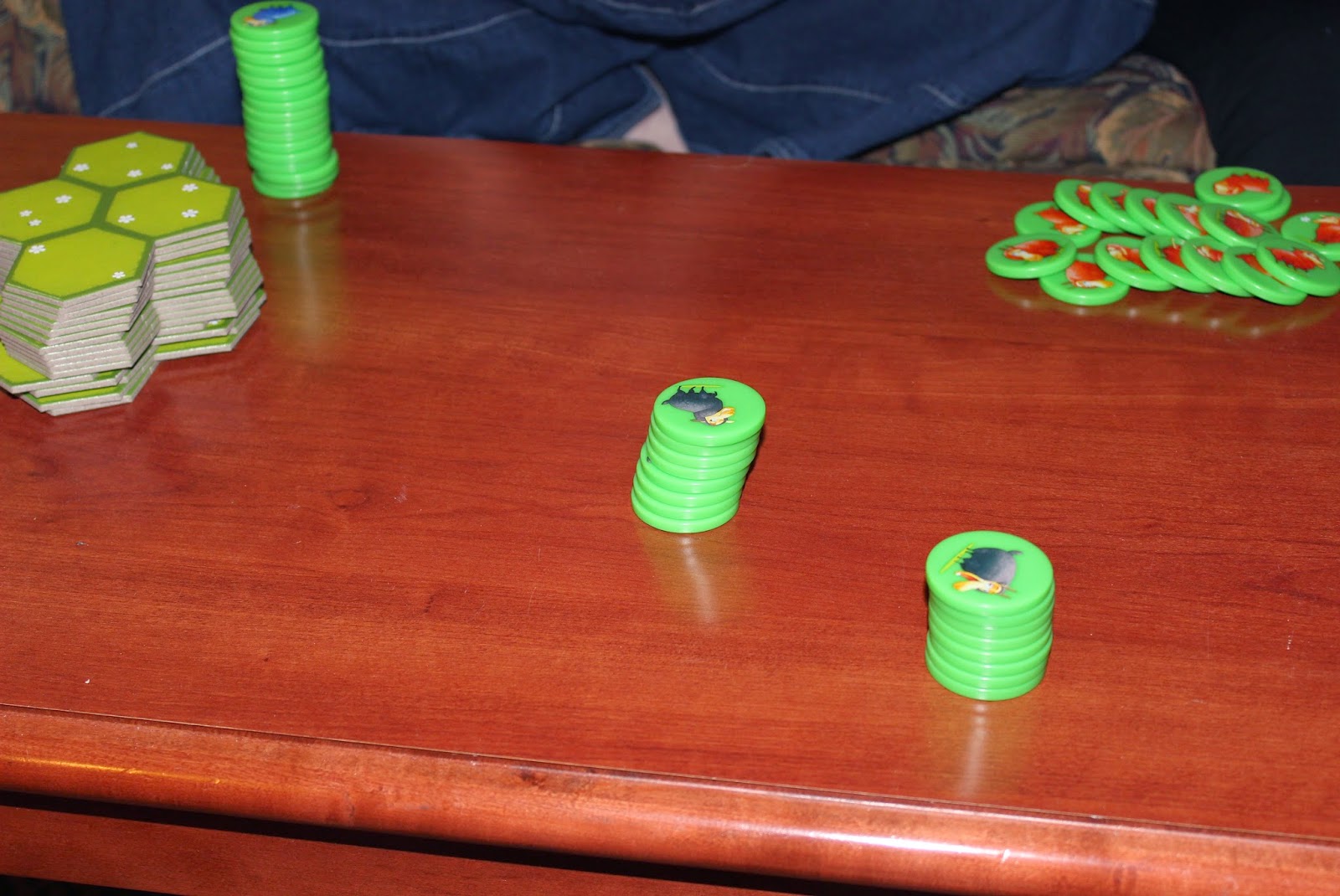 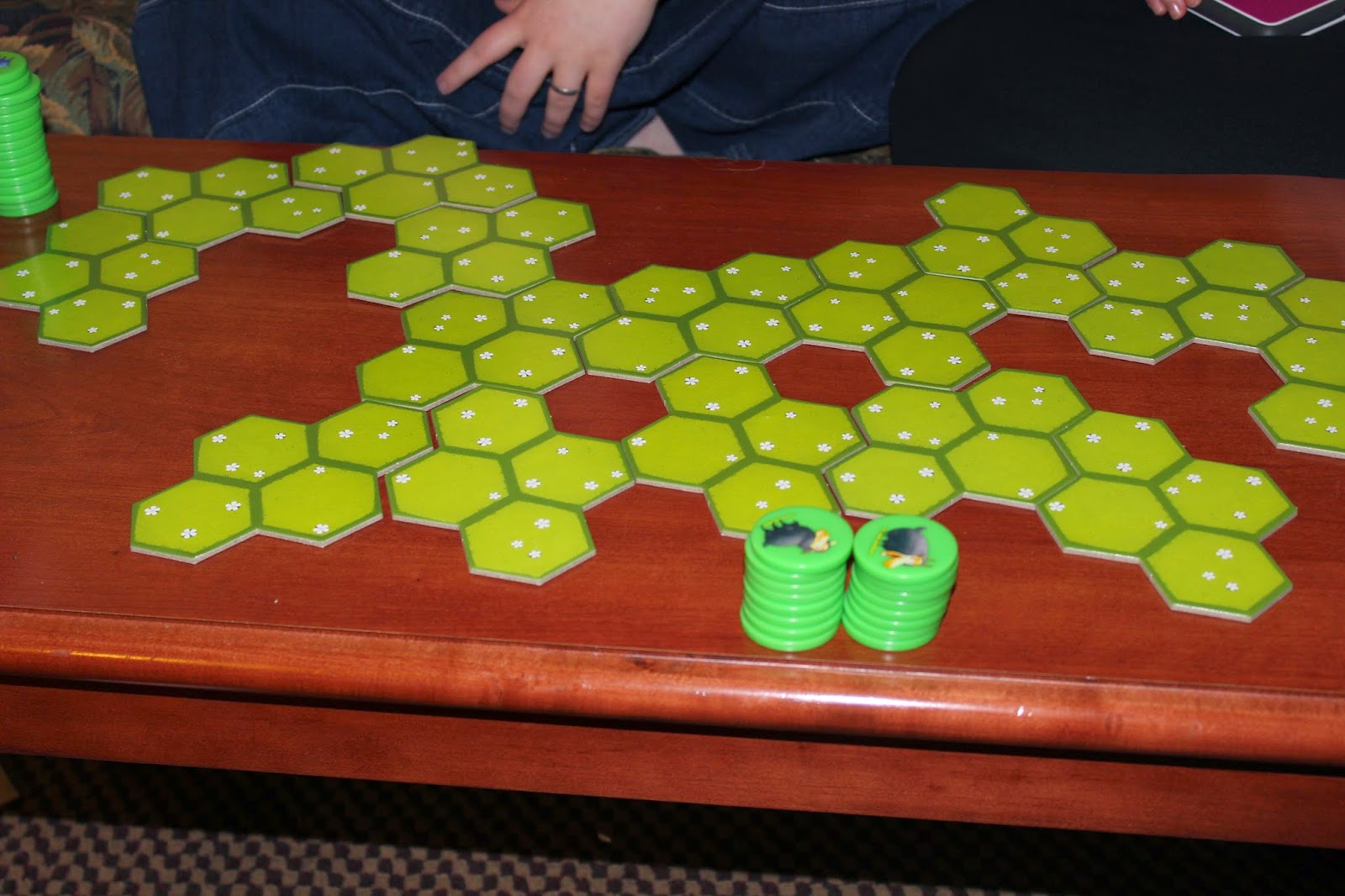 The girls and I pulled this game out when Sunday afternoon while the rest of the family was napping.  We decided we wanted to try something new and Battle Sheep was our choice.  The first couple rounds went slow until we all caught on.  Then....it became very competitive!  Needless to say, some sheep joined forces and went after other sheep.  On purpose! 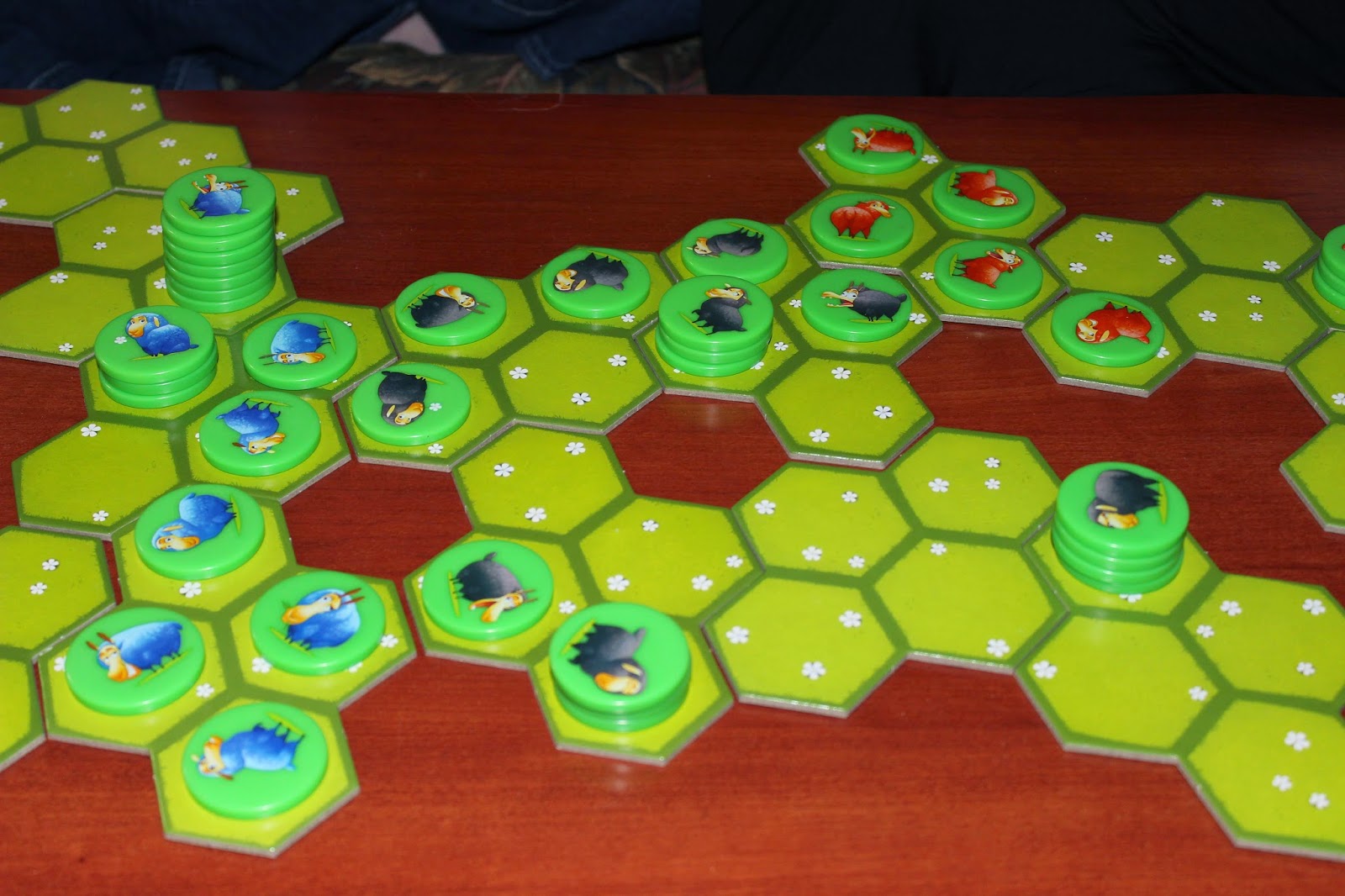 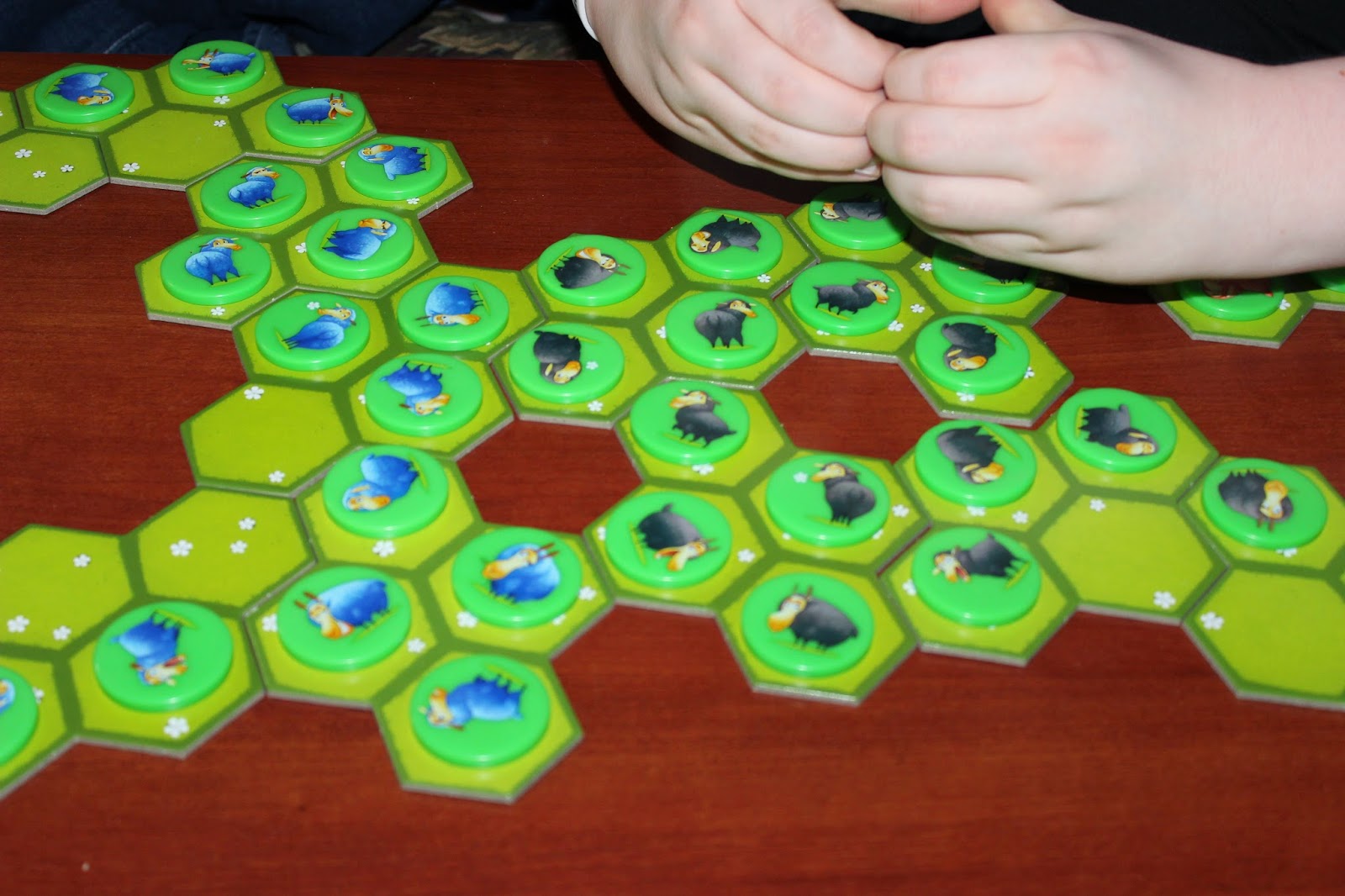 Here is a short description of how you play the game, but believe me, it just doesn't describe the fun of actually playing.  To begin with, you have 16 circular pieces, and then 16 sheep each of four different colors.  The sheep are actually circular discs with sheep on the top.  You can choose from black, white, blue or an orange sort of color.  Now, the pasture must be placed on the table.  You can take turns laying out pieces, or we found it easier to just hand each person 4 pieces (when there are 4 players) and allow everyone to build the pasture at the same time.  All pieces of the pasture must be connected.  Now, everyone places their sheep in a stack on one space of the pasture.  To begin play the first player chooses to move however many of their sheep they would like, remembering they have to leave at least one on that spot.  The sheep must travel in a straight line as far as they can before they stop.  Play then goes to the next player.  The object of the game is to get all your sheep out on their own spaces while trying to hinder other players from getting all their sheep out. 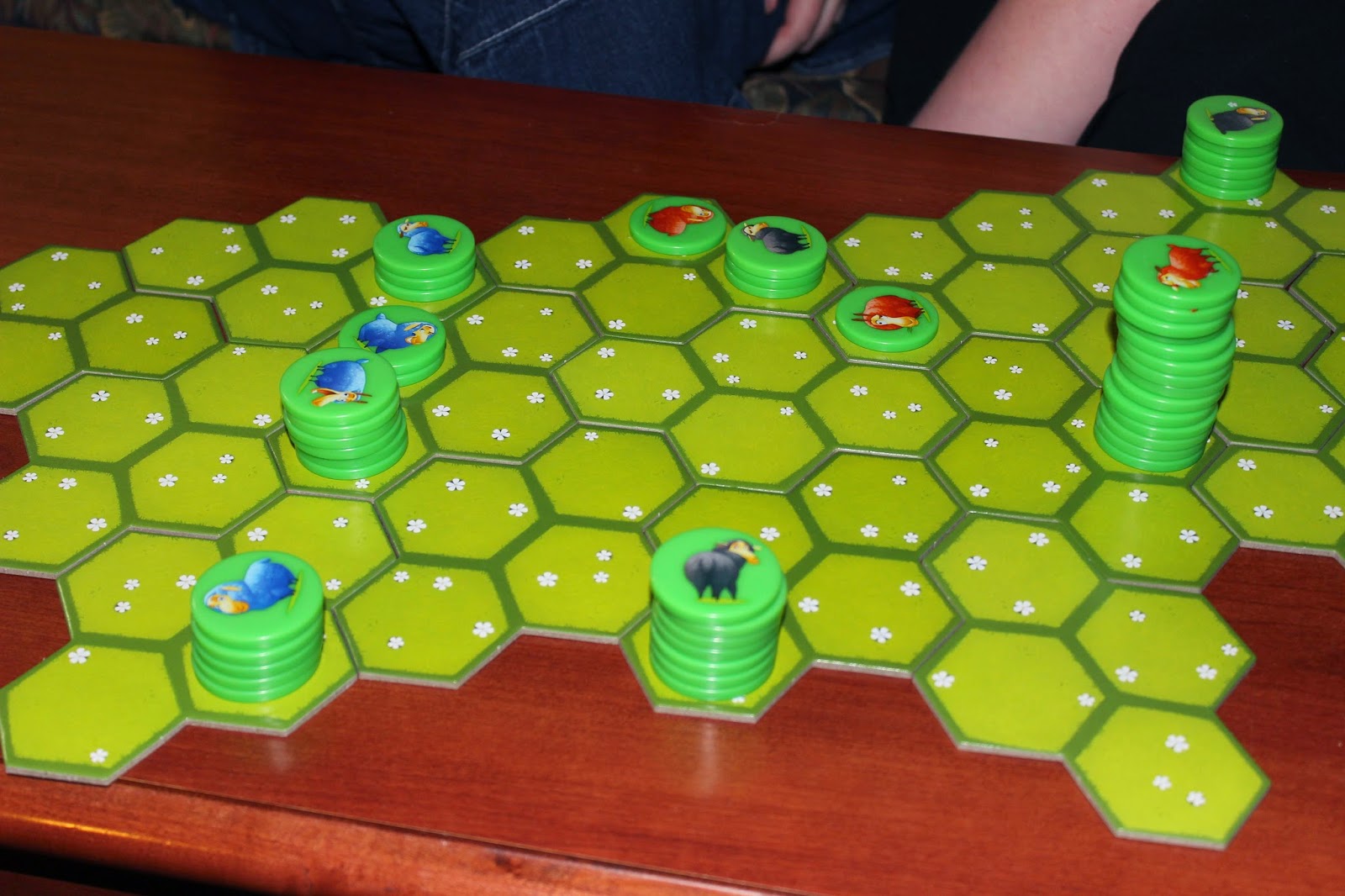 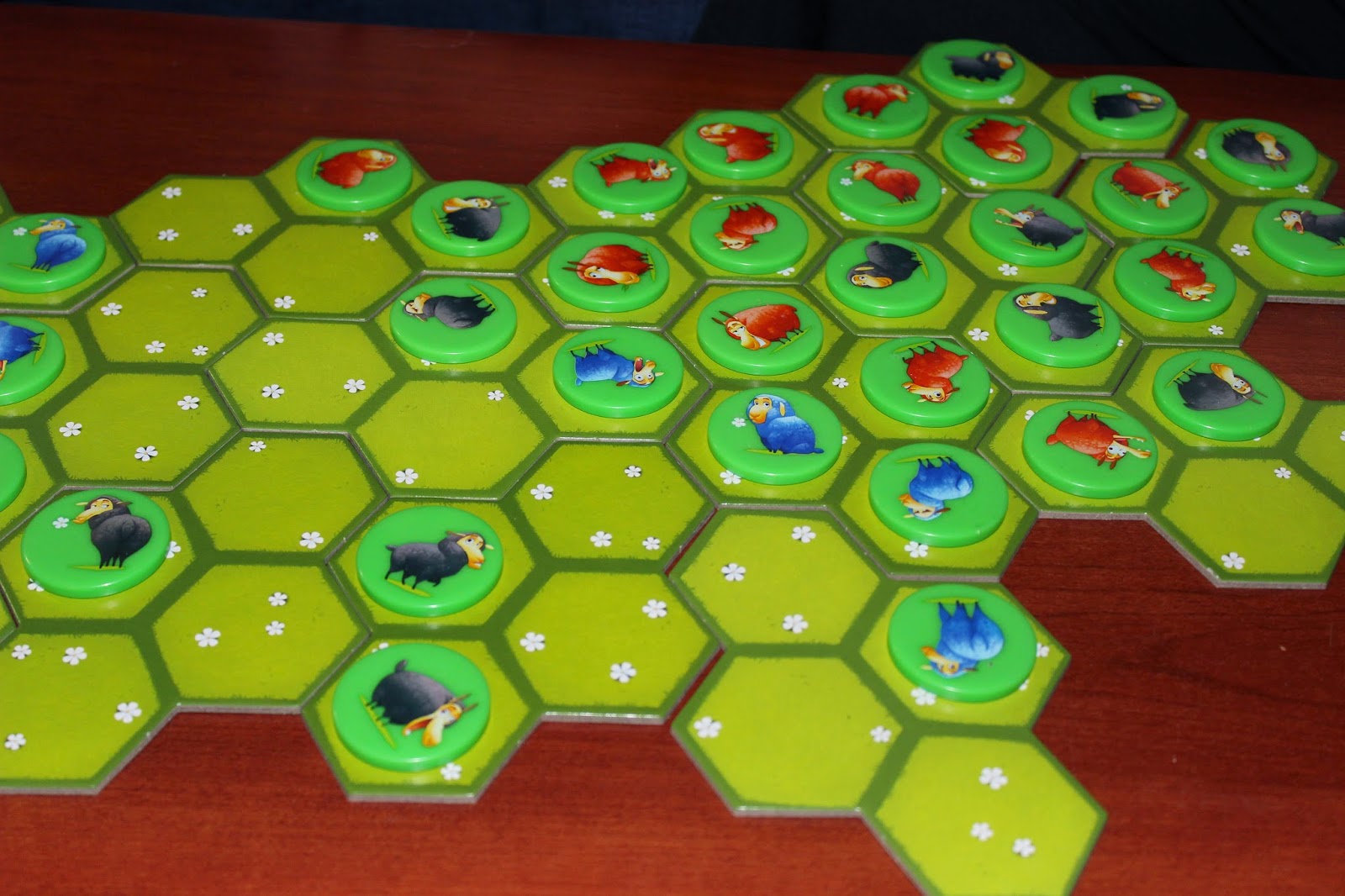 I know, describing Battle Sheep is a bit difficult, but it is a super, fun game. Near the bottom of this post is a short video explaining Battle Sheep, from Marbles the Brain Store.  We finally sat down and showed my husband and one son how to play last night.  They really enjoyed it too! 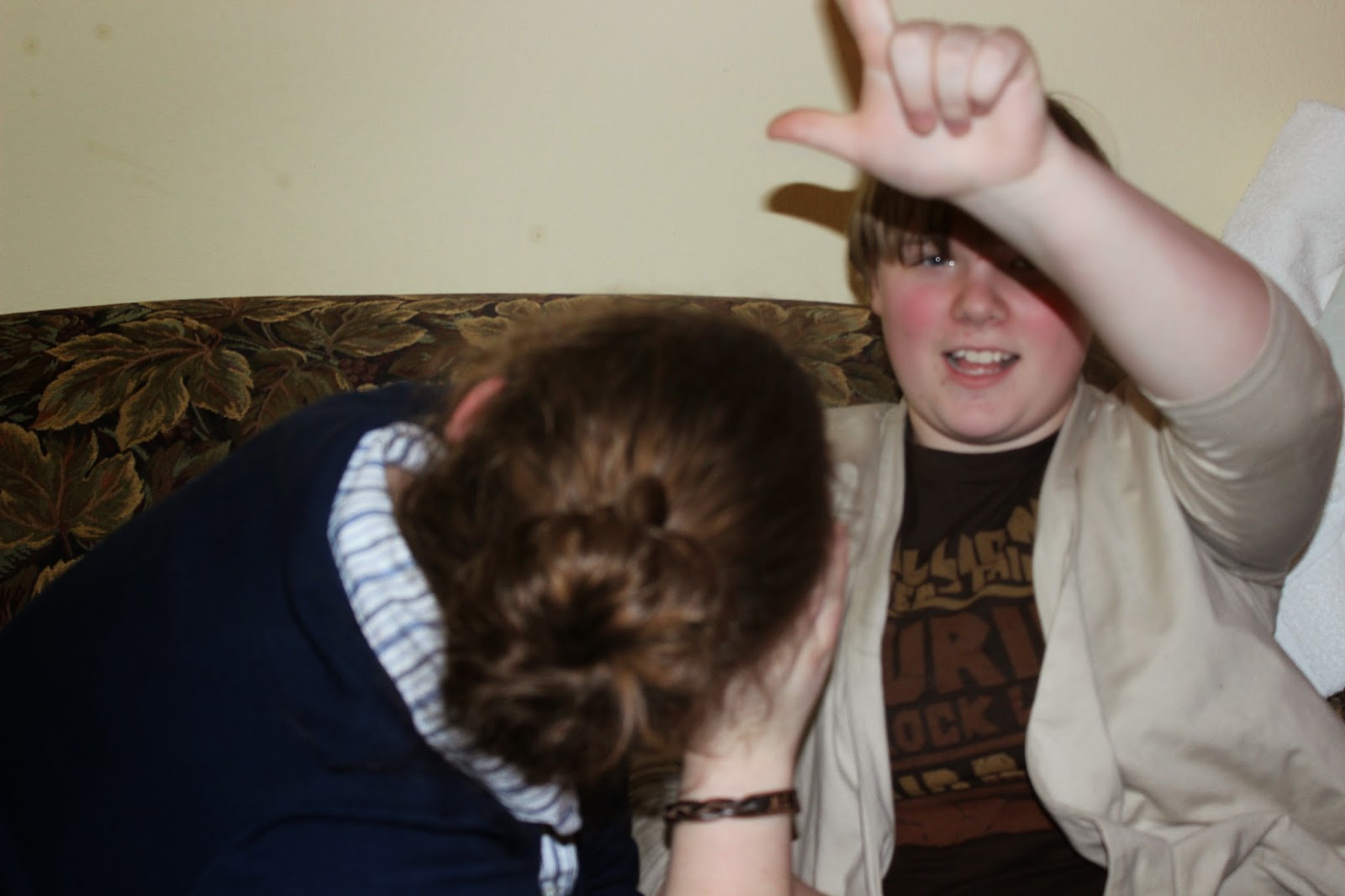 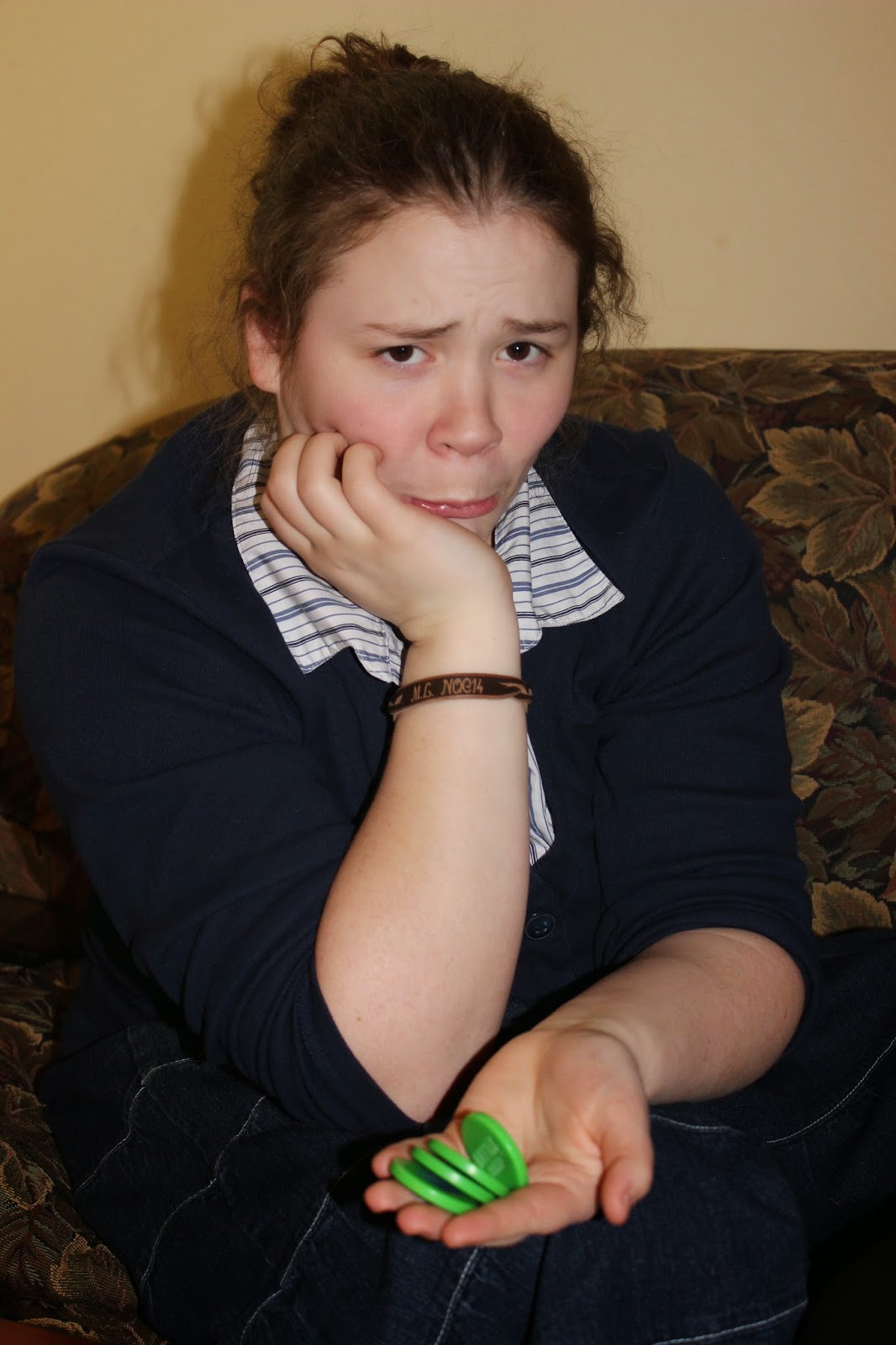 Battle Sheep makes a great addition to our game closet.  And yes, I mean closet.  Since we play games at least once a week, we have a wardrobe cabinet full of games, not to mention a shelf in the hallway. 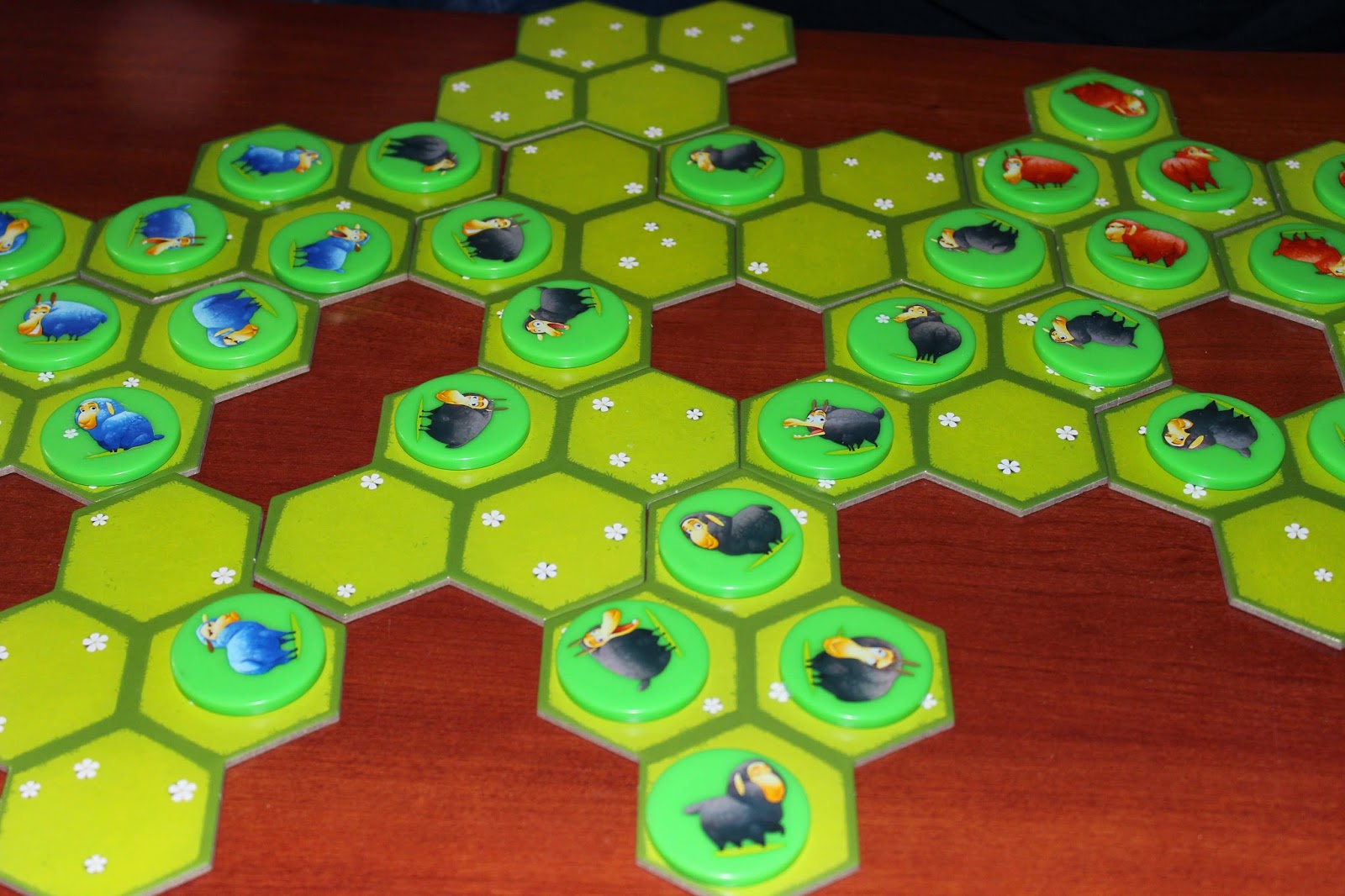 Blue Orange Games has a winner here and has many other games to choose from.  We have previously reviewed Spot It and 20 Express.  Be sure to visit their website and see if they have a couple of games to add to your game collection!

Video from Marbles The Brain Store.

Thanks for stopping in!  See you soon!