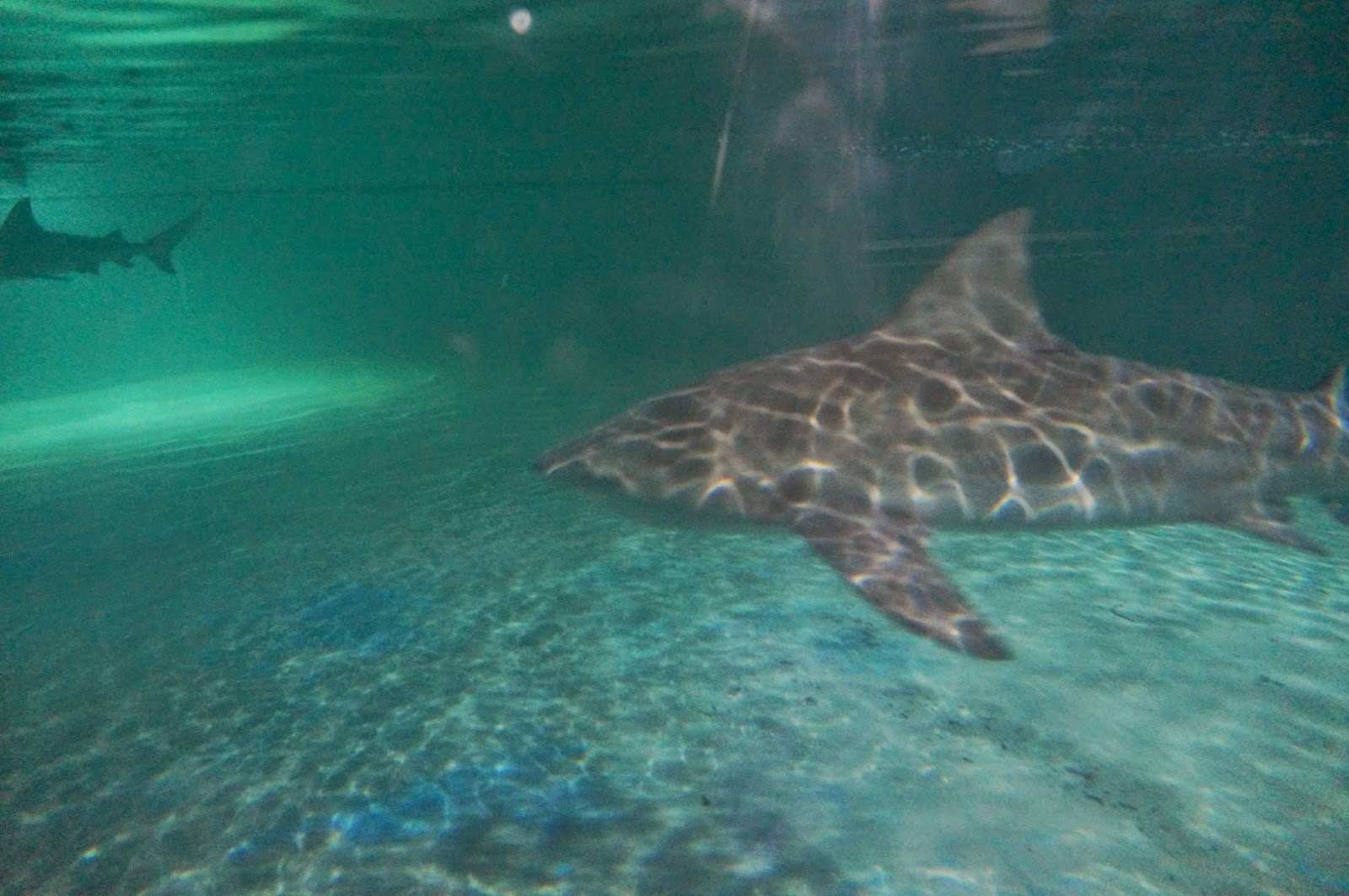 Yesterday we visited Branson's Wild World.  It was great!  I was honestly a little skeptical at first, but shortly after arriving all skepticism disappeared.  Branson's Wild World is not the first thing most people think of when they think Branson, but if you are planning a trip, this is one stop you should add to your list.

After entering and receiving your armband you proceed through a doorway and slowly, at your own pace wander through and view all kinds of fish, reptiles, spiders, mammals and birds.  Aquariums and other viewing areas line the walkway.  My husband and I spent quite a bit of time watching the sharks.  It is set-up so you can vies them from above, or below the water line.  Below was my favorite.  They actually swim right up to you. 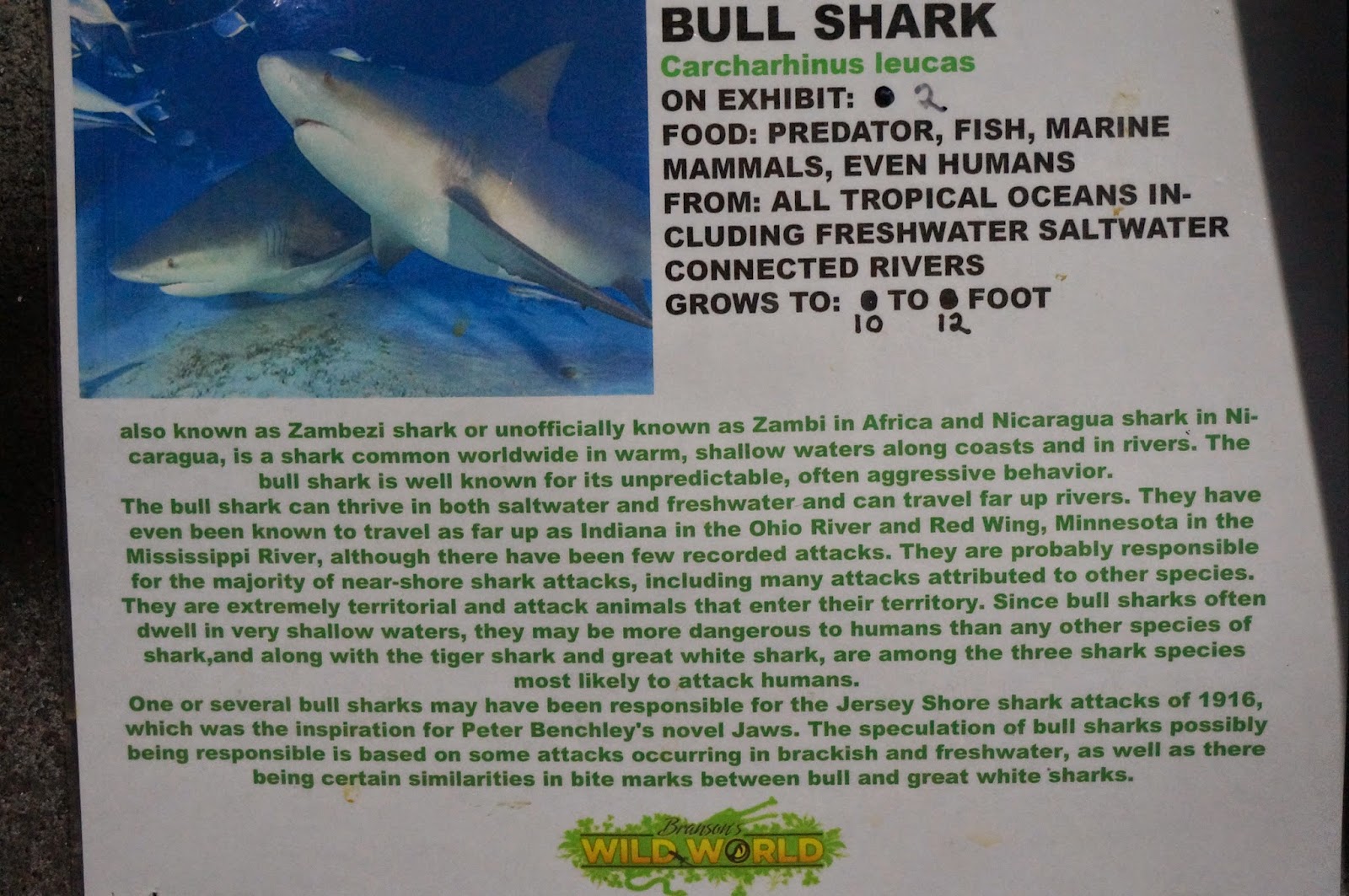 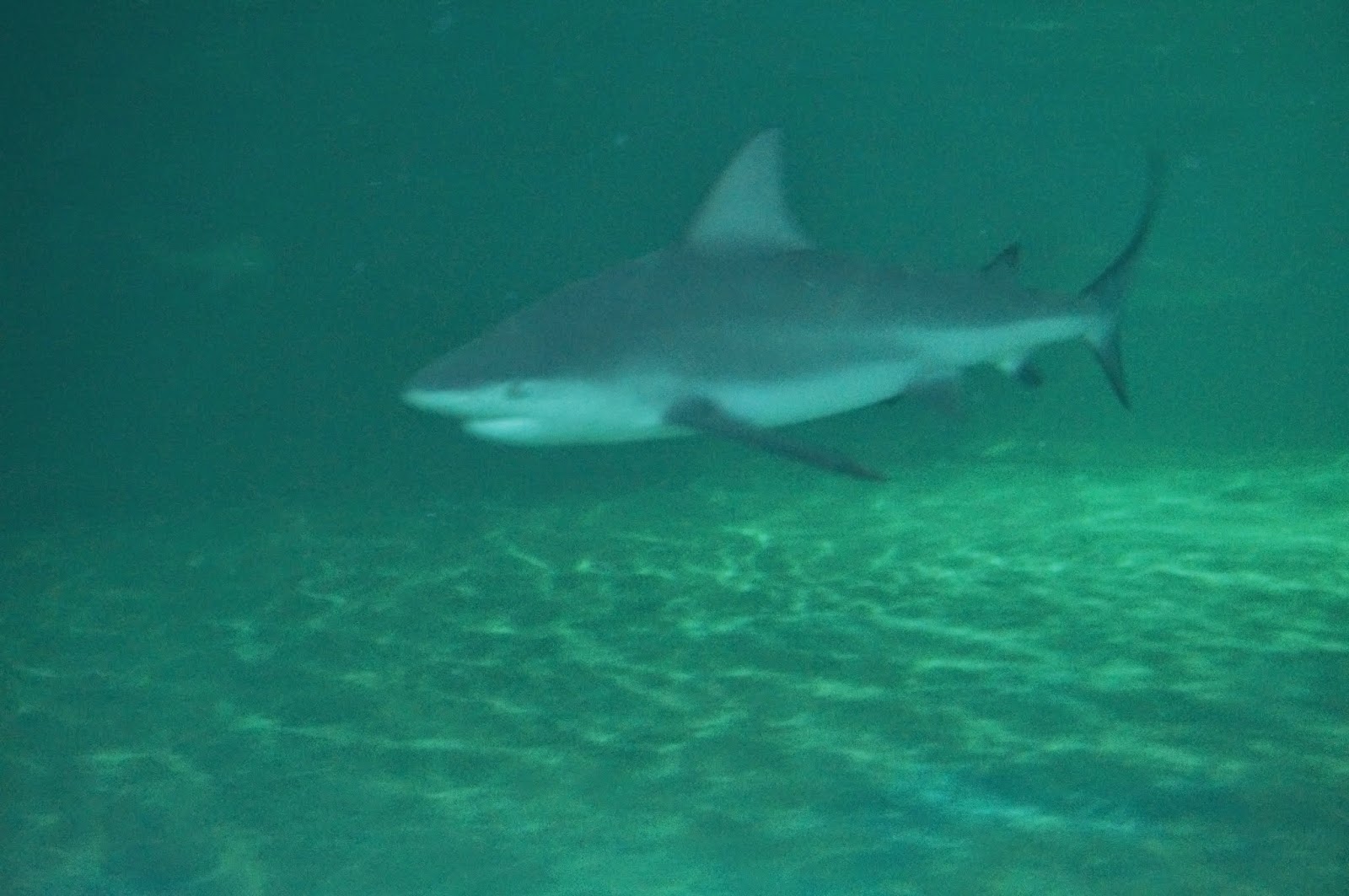 The alligators and crocodiles were also very interesting.  It was amazing to be standing so close.  You could clearly see their teeth. One you could hardly tell it was breathing, but then the eye started following me. 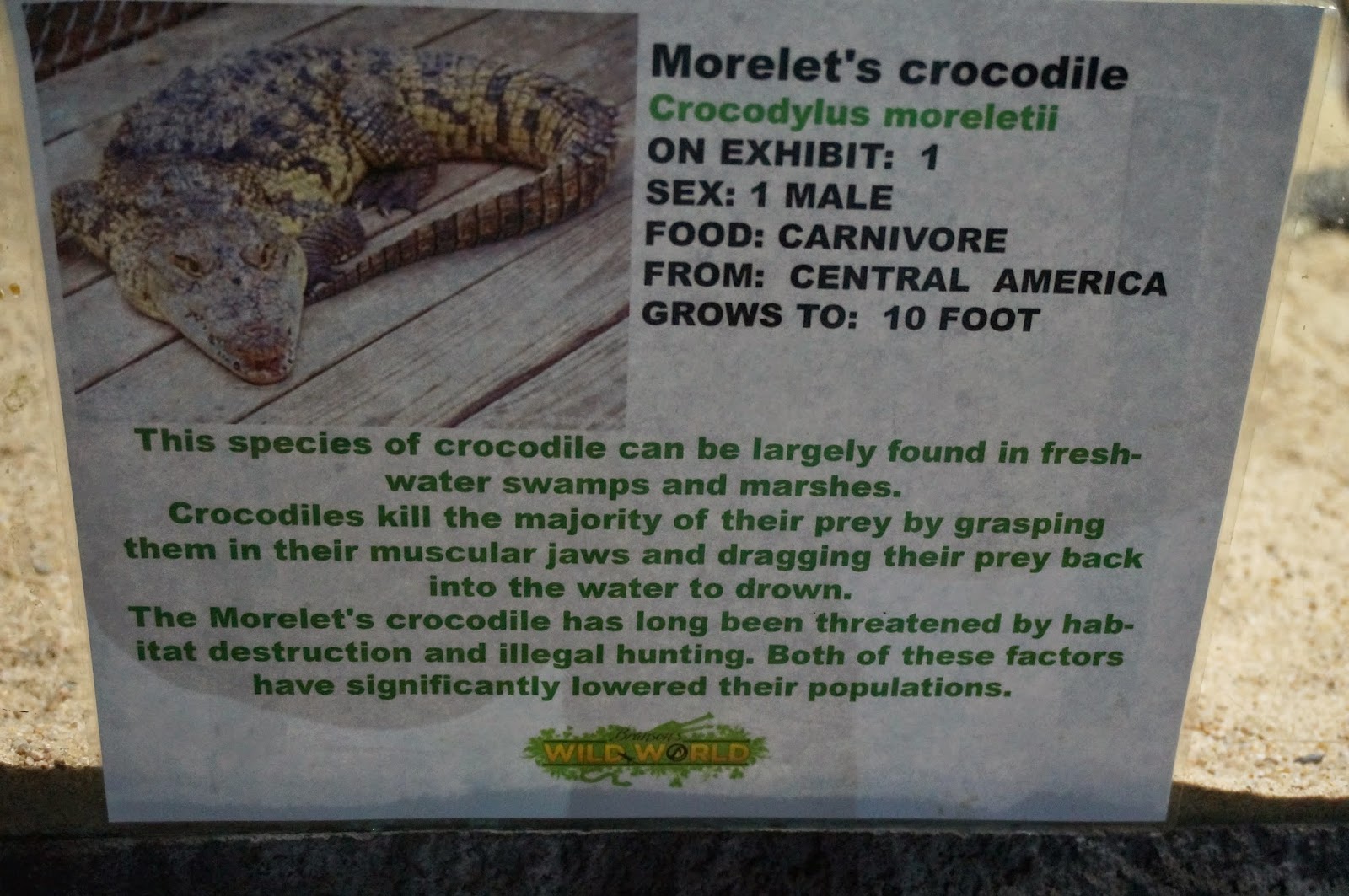 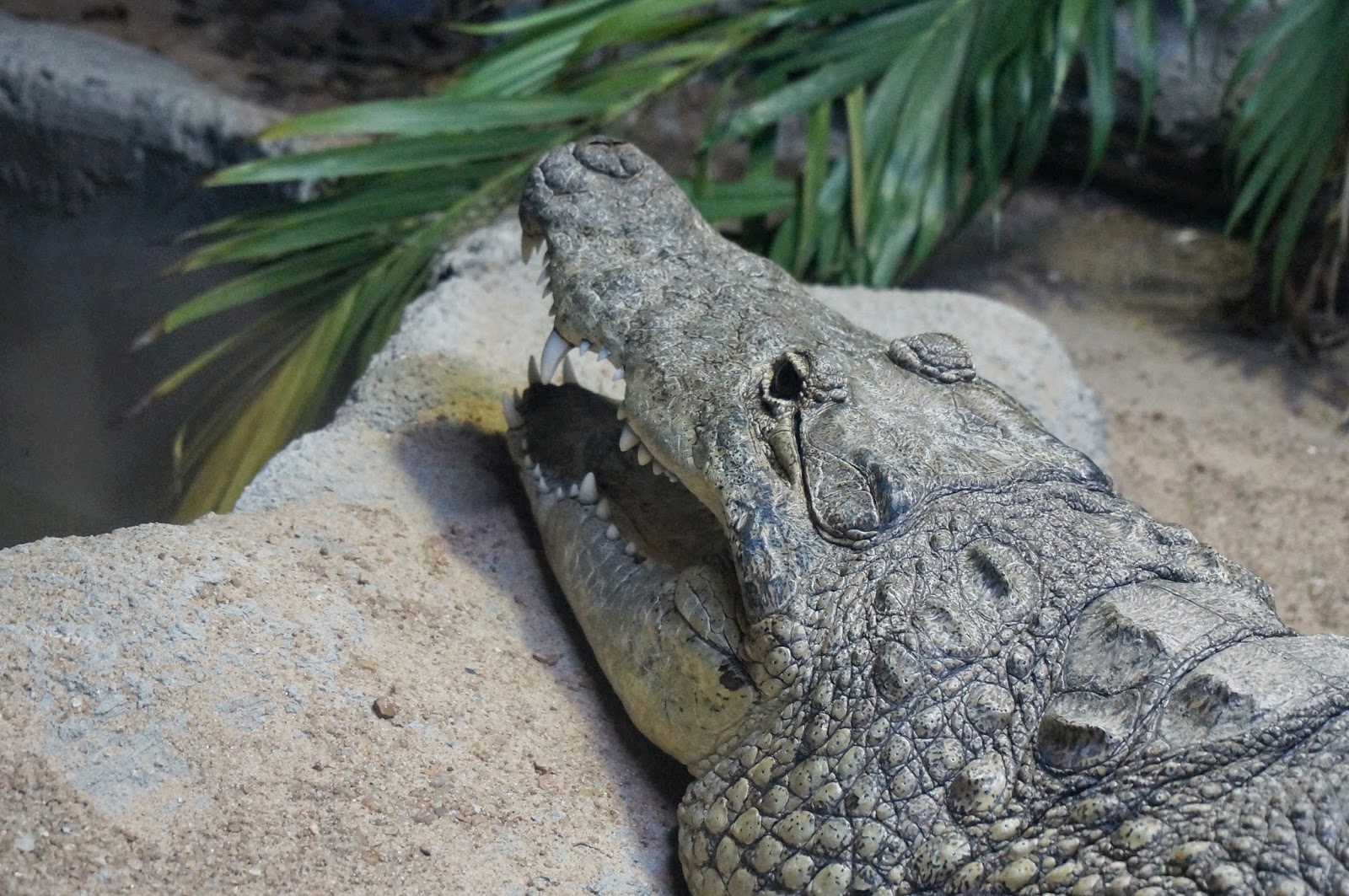 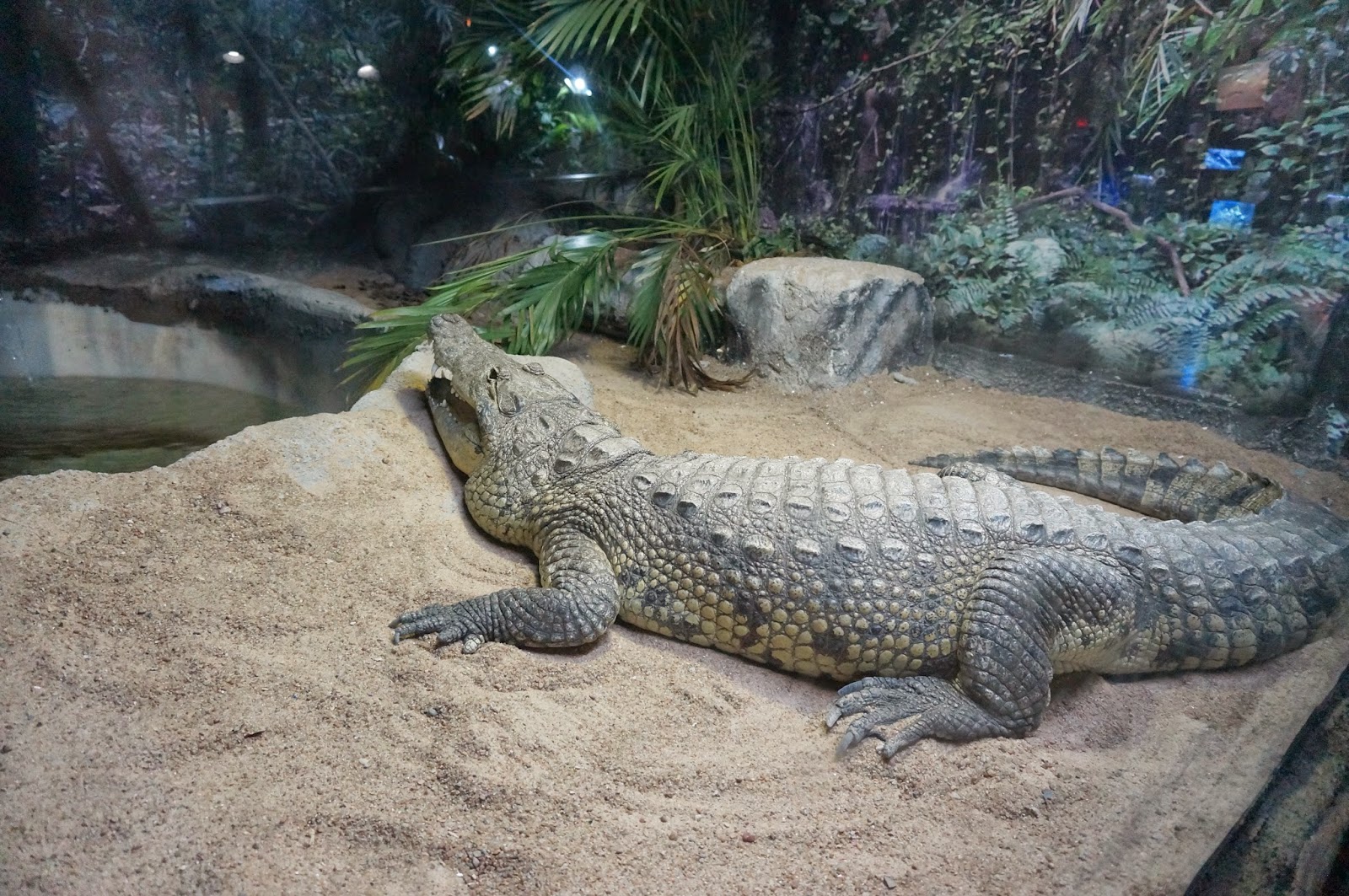 The above pictures are the Morelet's Crocodile.  Look at the jaws on that crocodile.  Apparently they grasp their prey and drag them back into the water to drown.  In the pictures below you can see the one who was so still he didn't even seem to be breathing. See the eye watching what is going on? 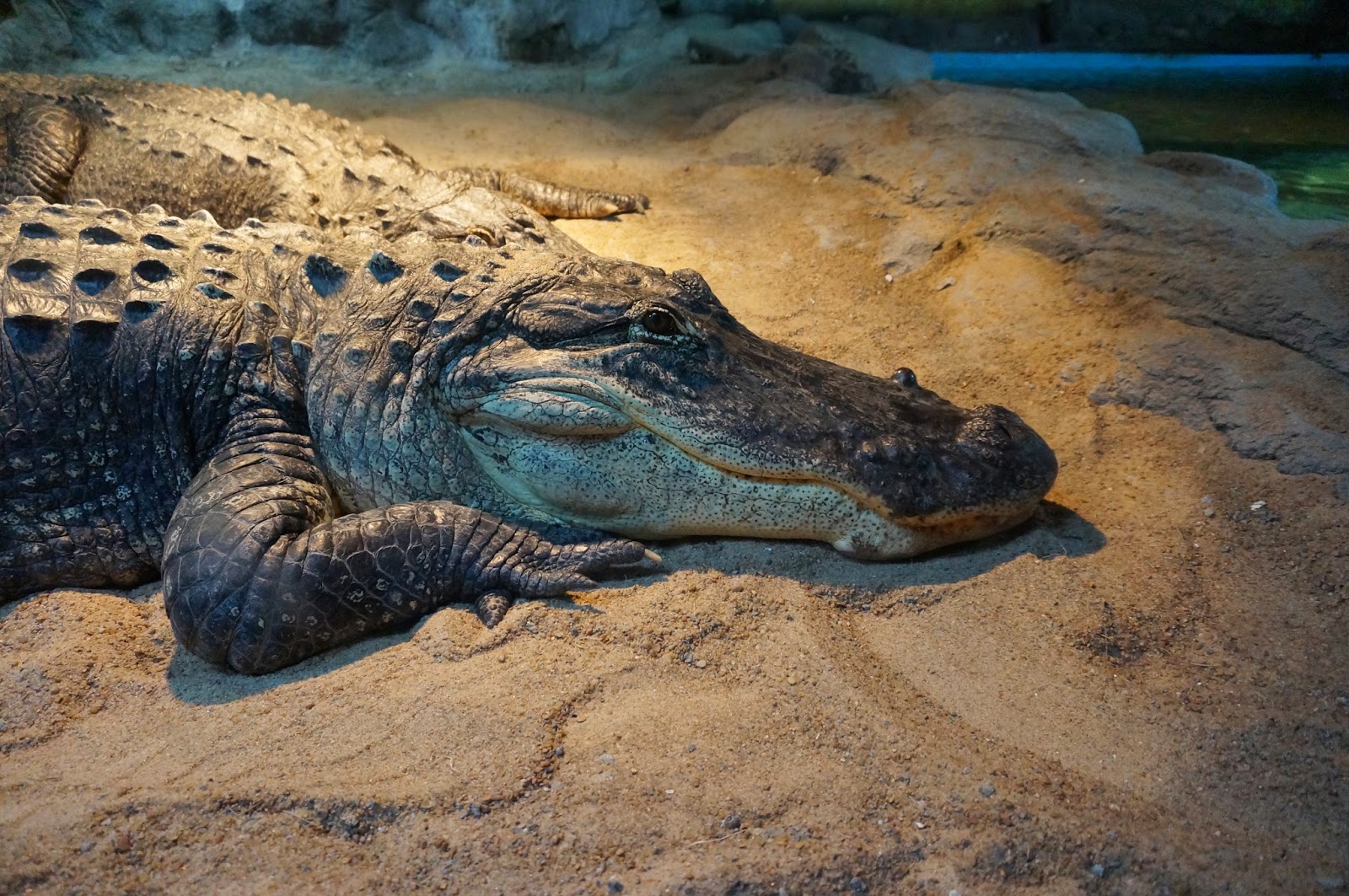 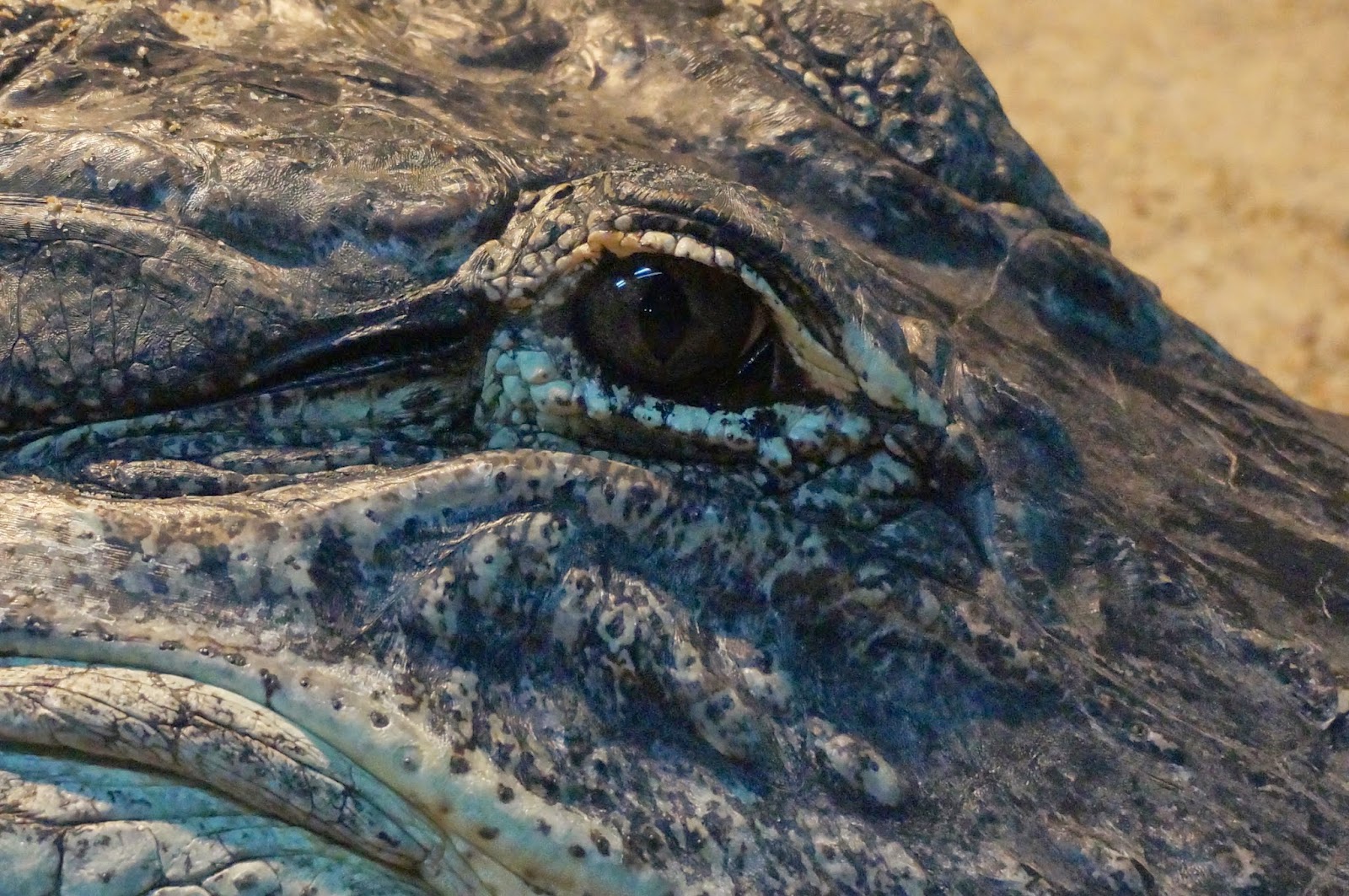 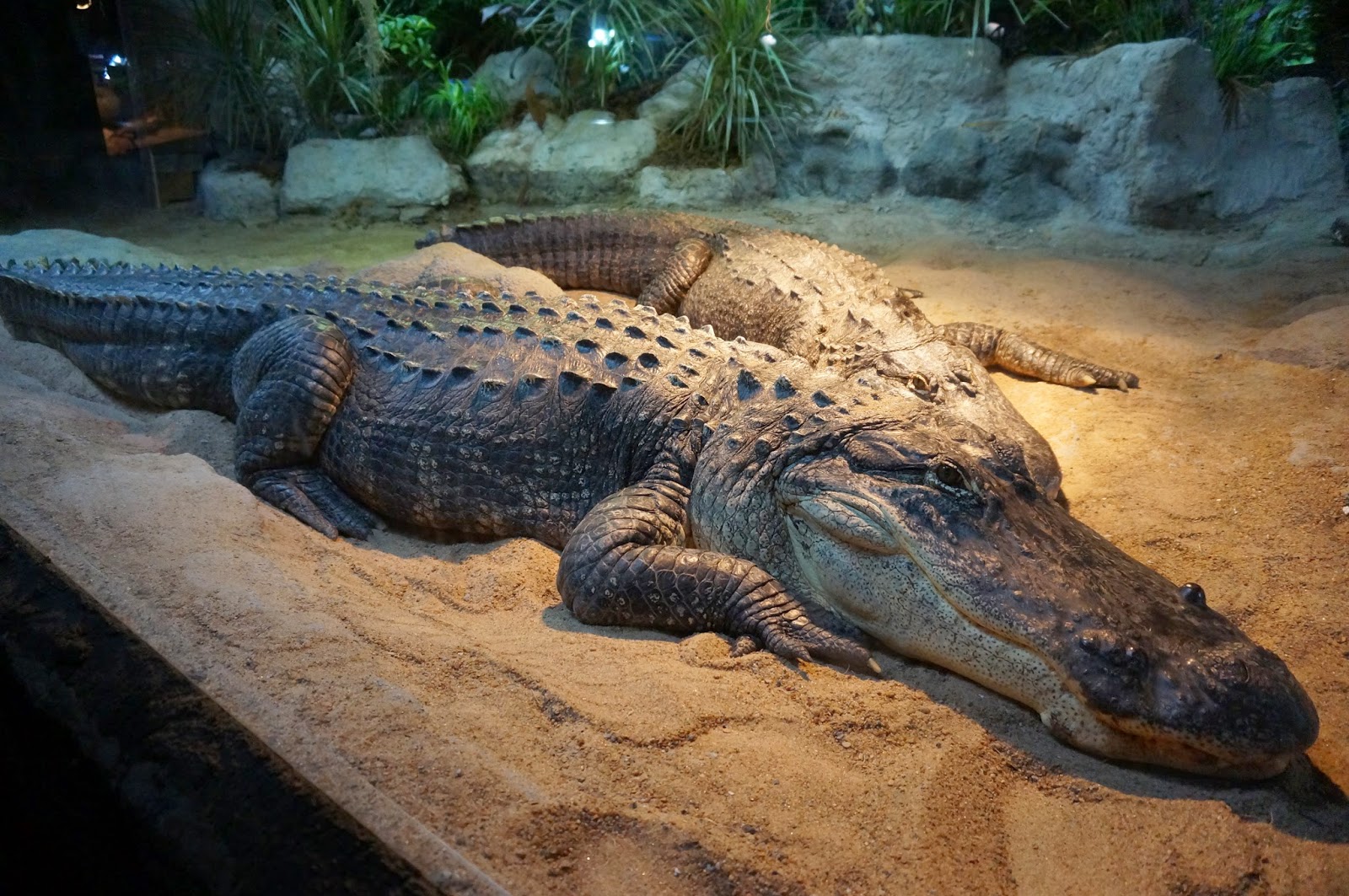 These creatures are enormous!  Here are a few more pictures of the crocodiles and alligators that can be seen at Wild World. 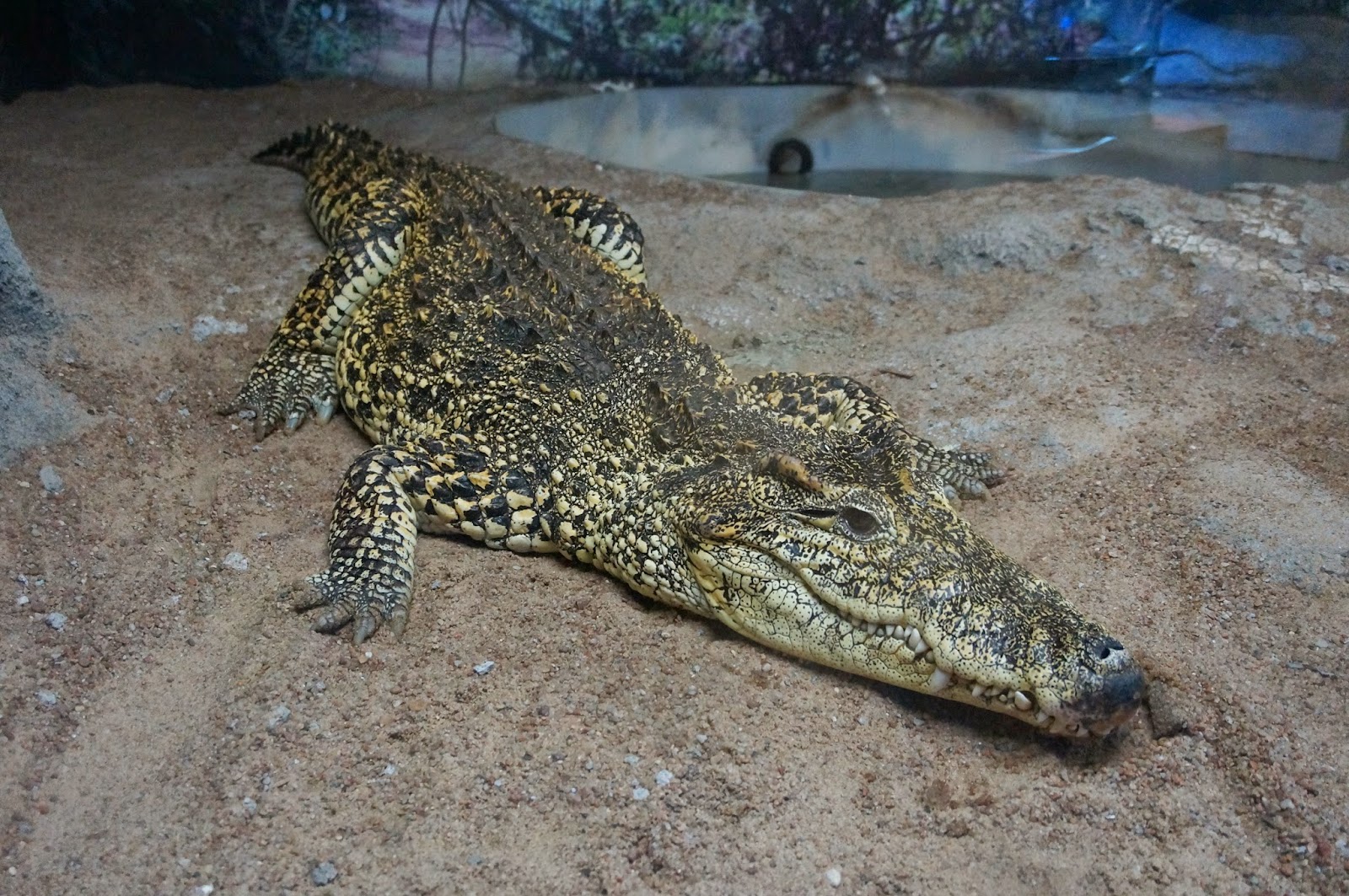 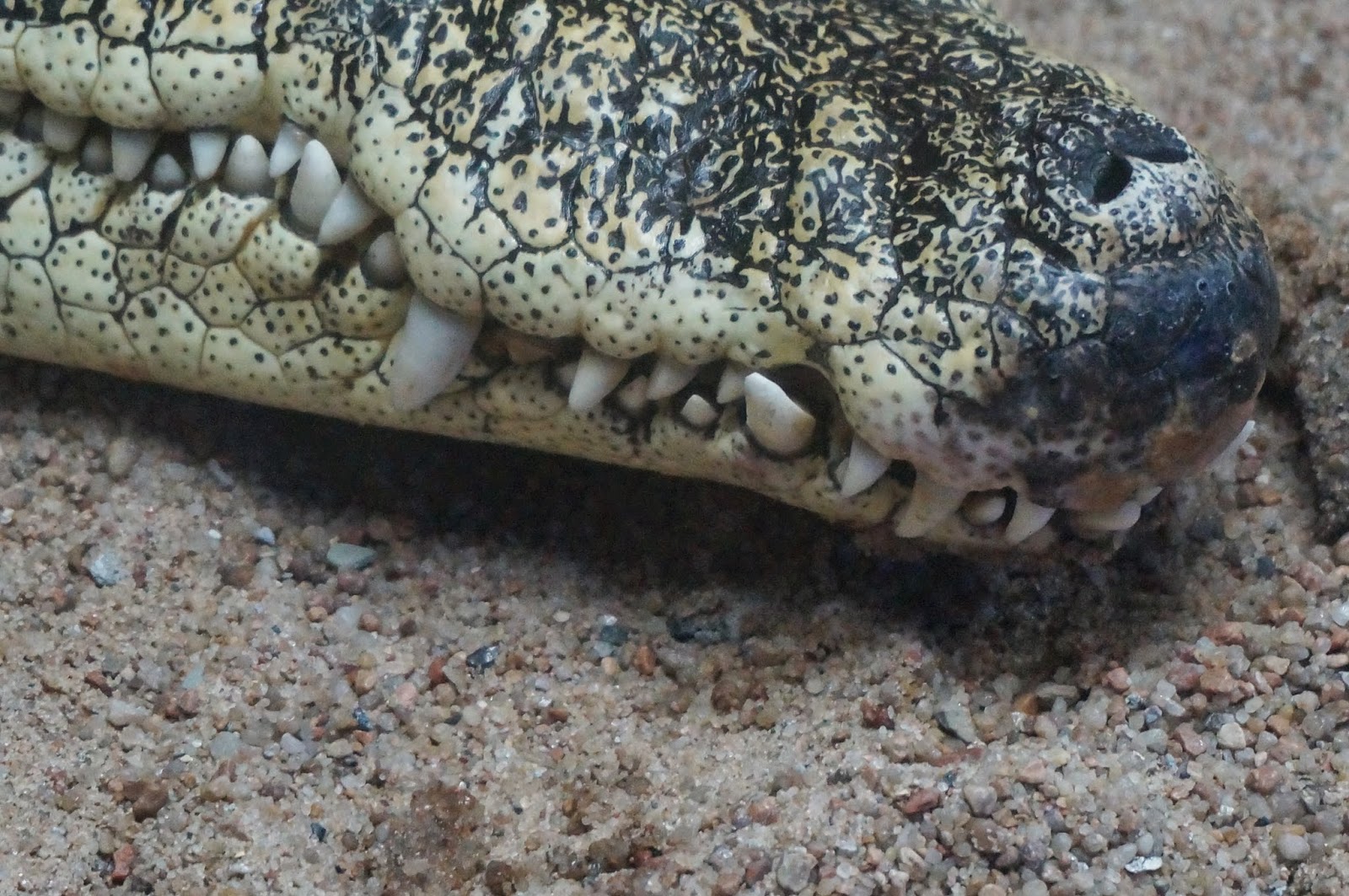 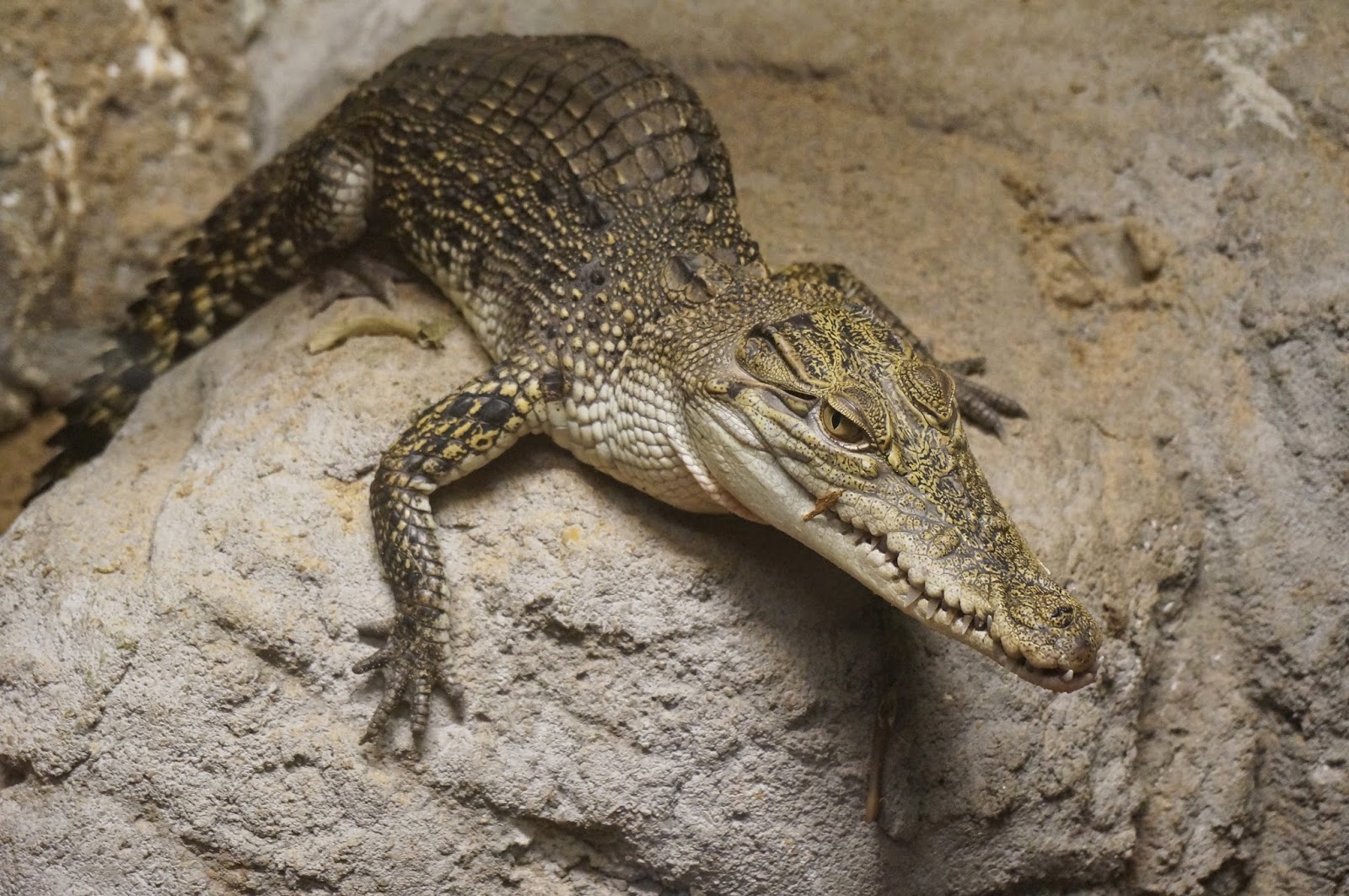 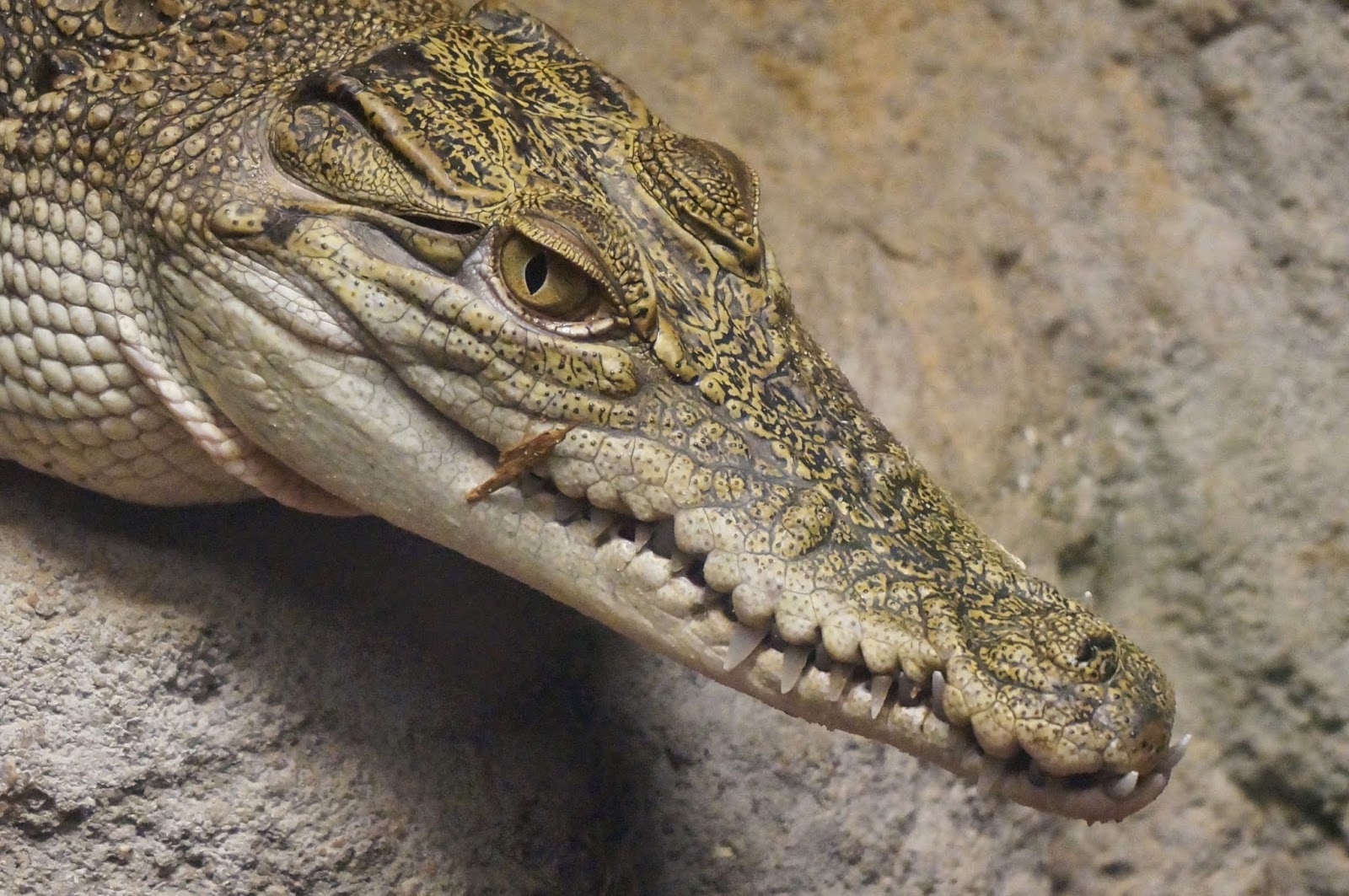 Or maybe you enjoy fish.  There was a variety of fish in several different aquariums.  There were also some horseshoe crabs, turtles and eels. 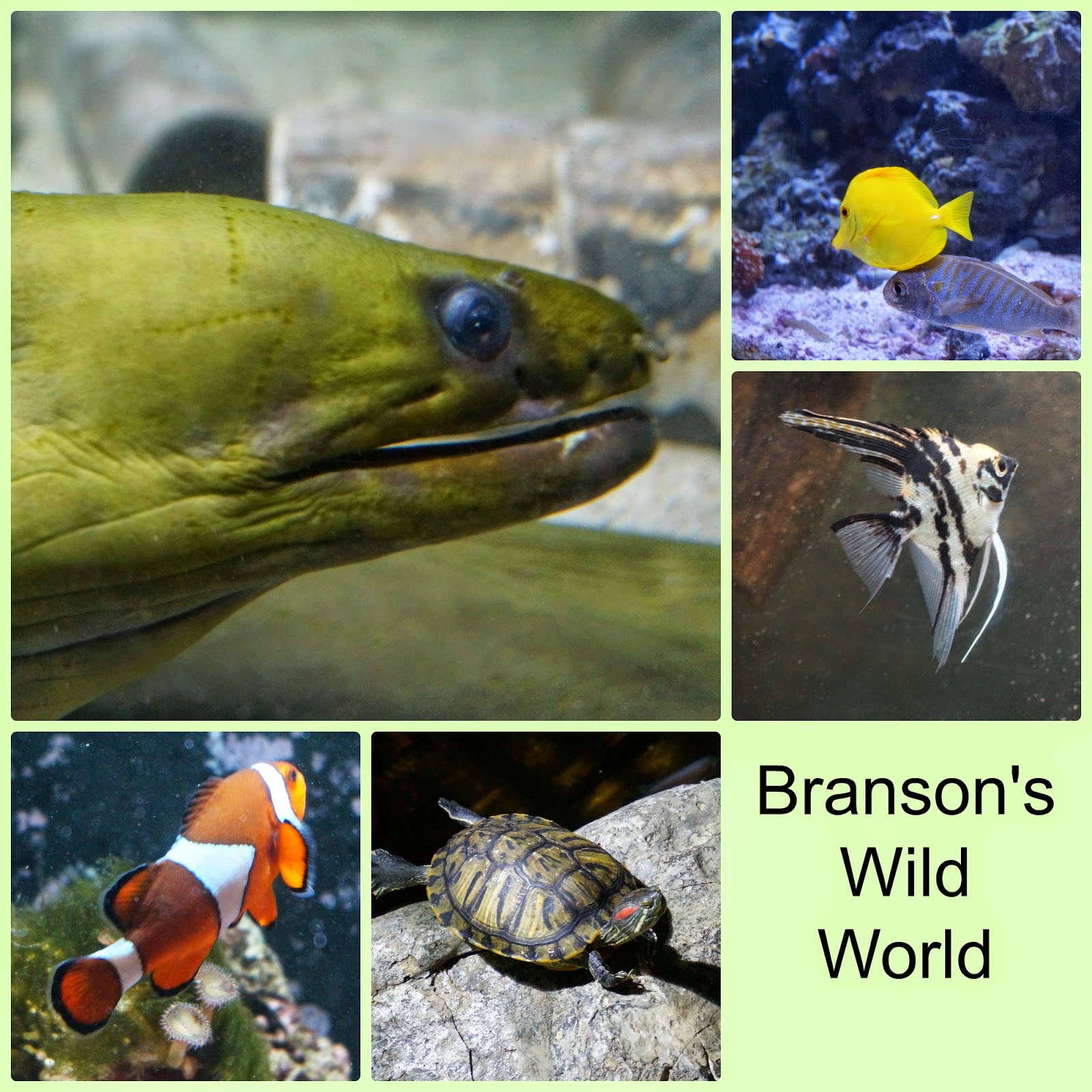 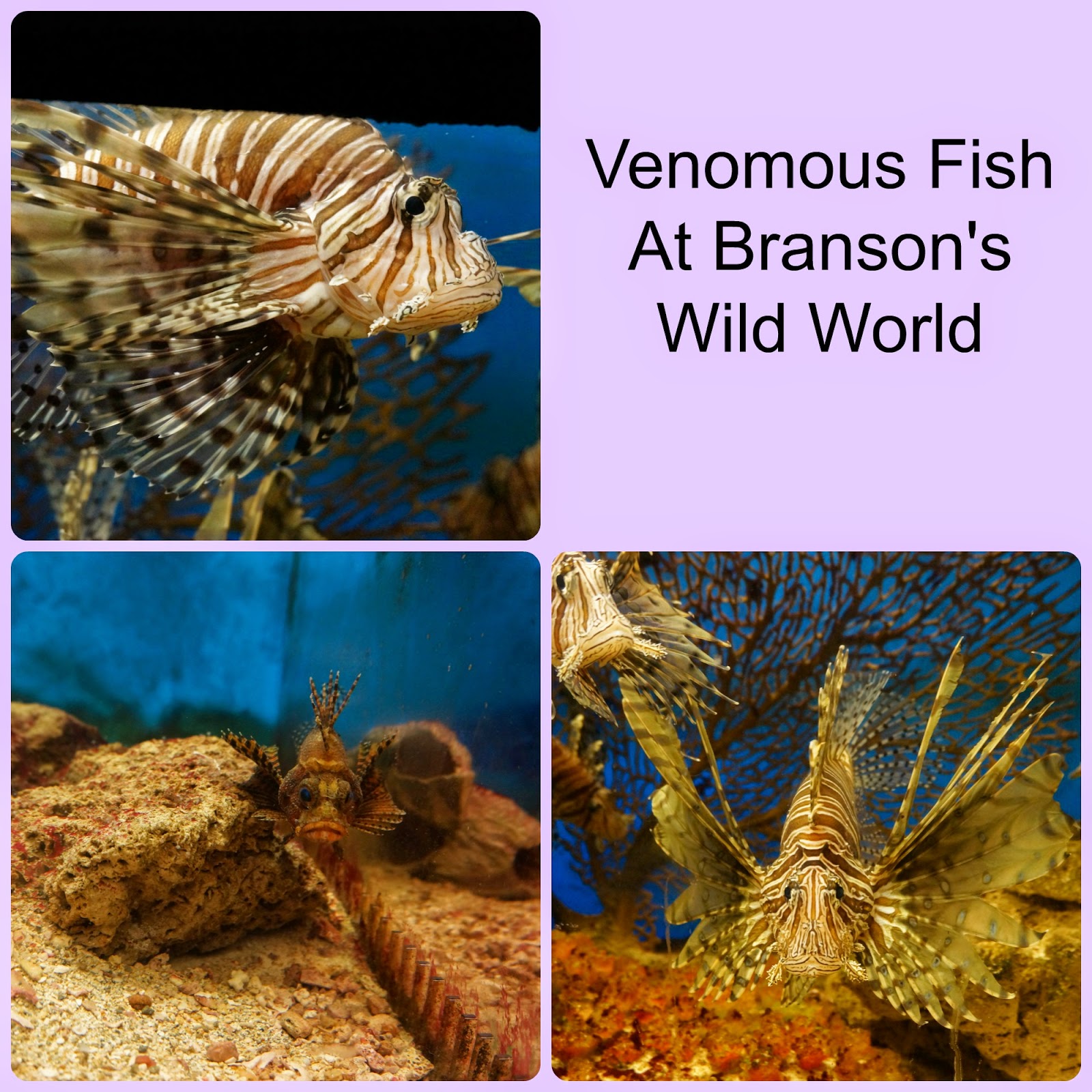 Do you have a son or daughter who likes Iguanas and Lizards?  There are plenty to see when you visit Wild World.  I was actually able to "pet" one. 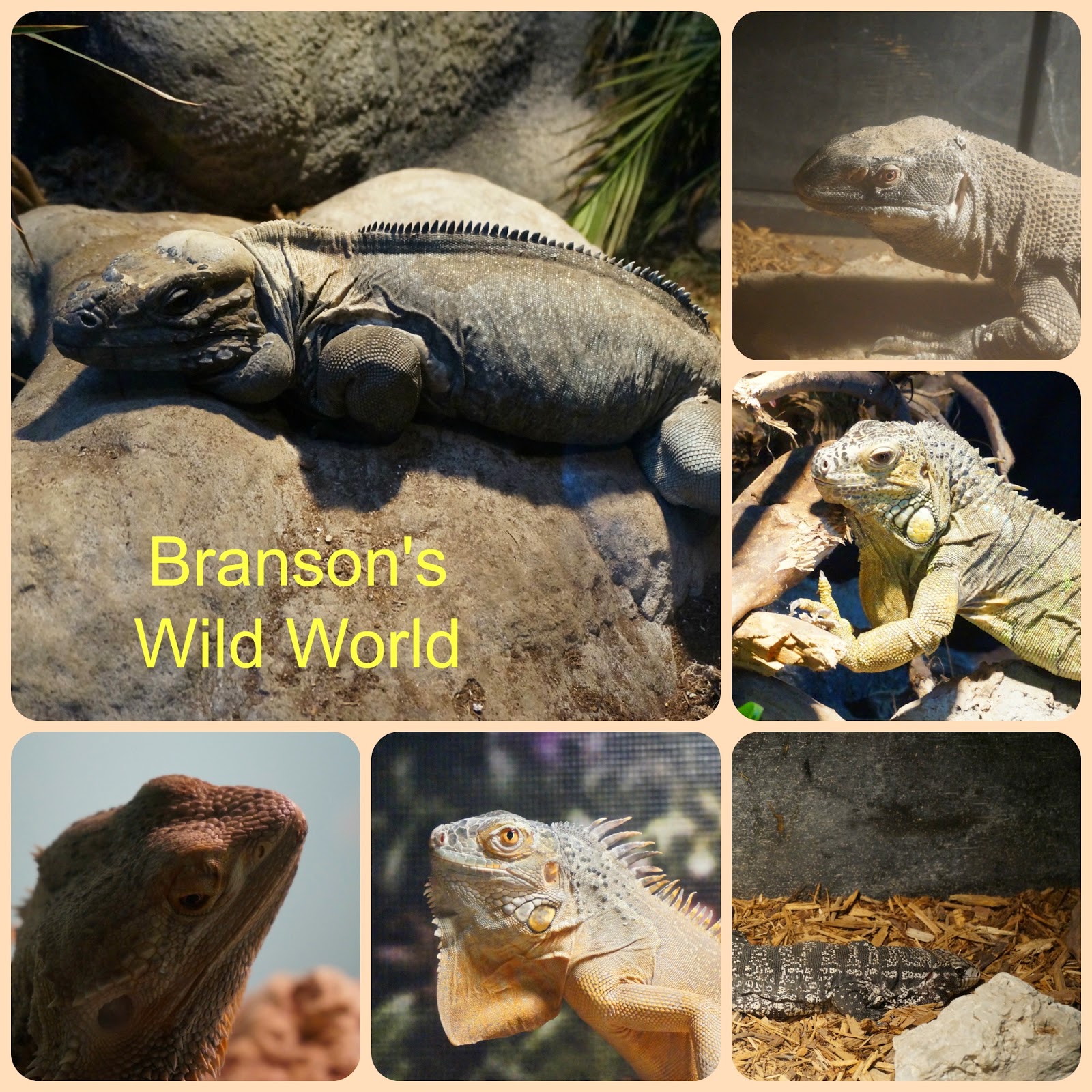 Another reptile featured at Branson's Wild World are their snakes.  Now, I don't mind seeing snakes as long as they are in their display cases.  Some of them are really beautiful in their color and design, but still not my type of pet.  You and your family will be able to learn quite a bit about snakes as you wander through WIld World, as each one is labeled and has information about their habitat, food, and of course if they are harmless or venomous. 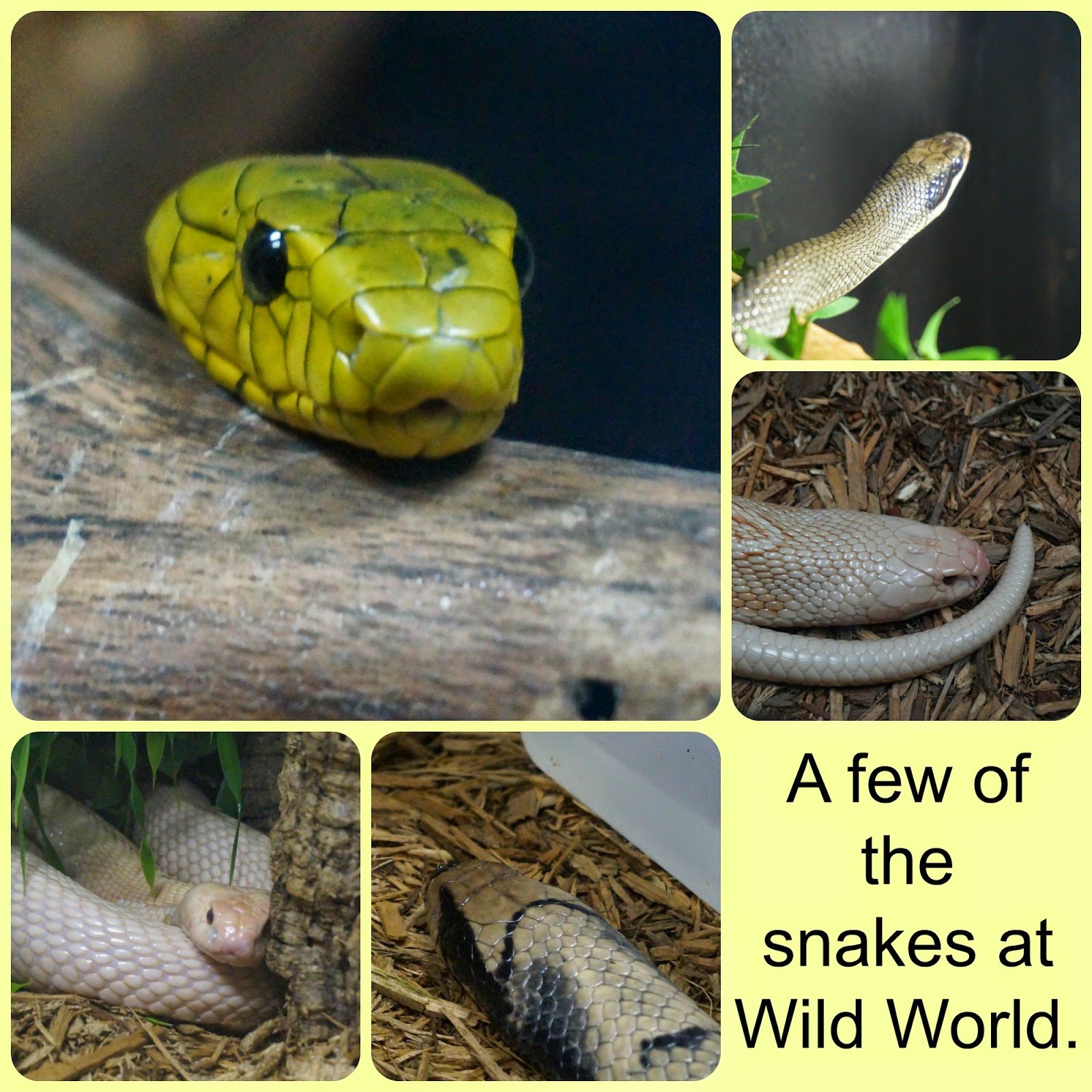 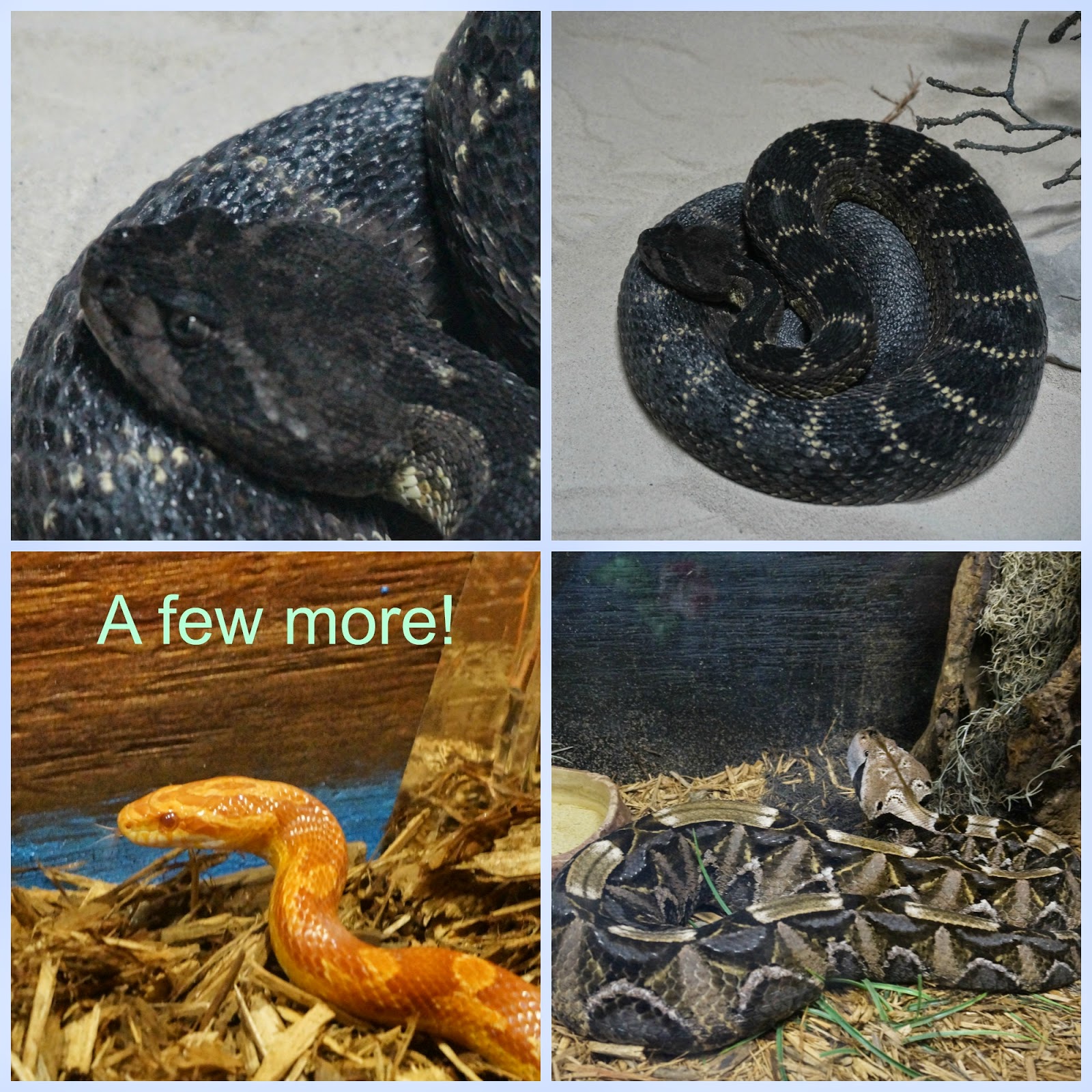 Several frogs and toads are also on display here.  I was amazed at the size of some them. 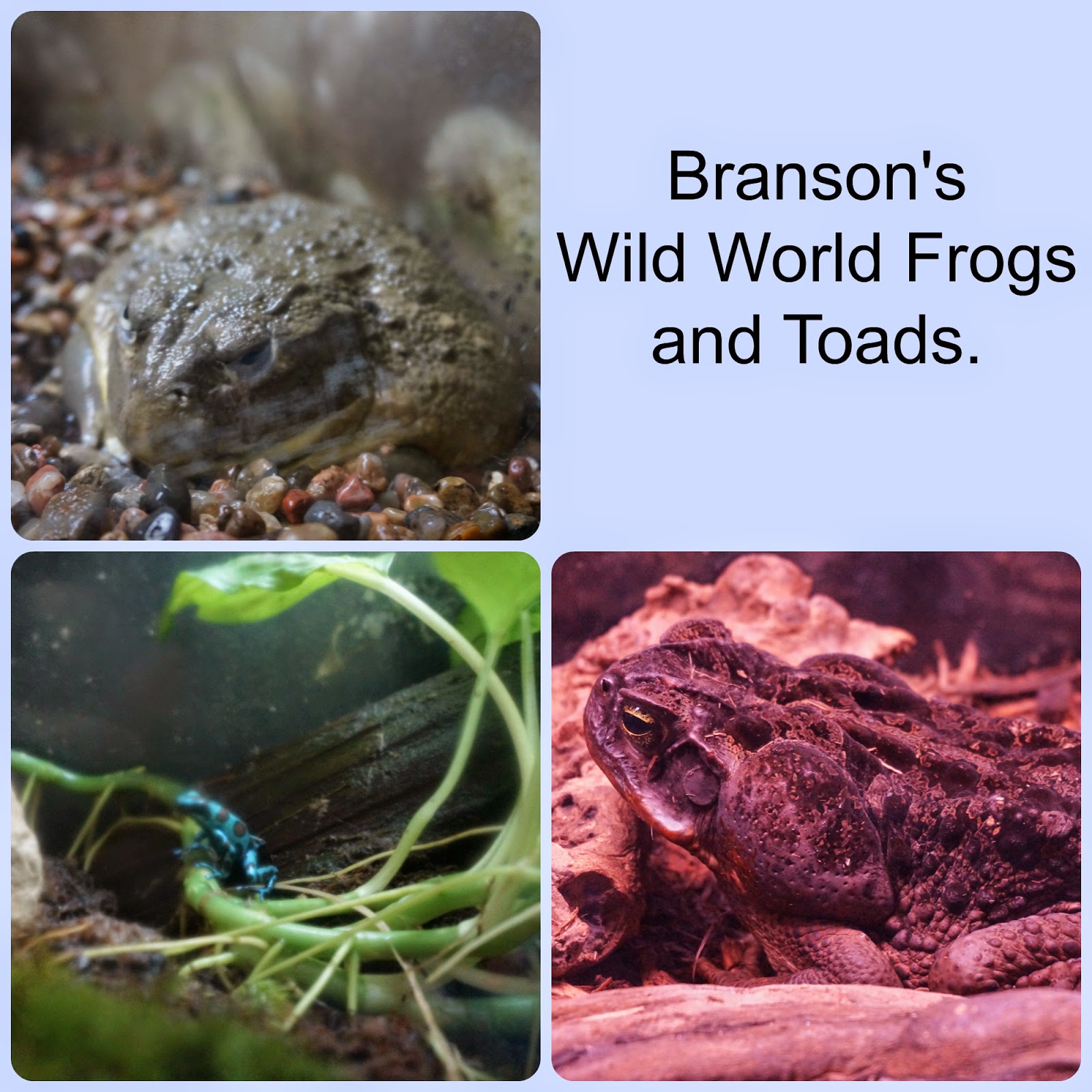 I personally enjoyed seeing the wolves.  They have had the wolves since they were small.  They are now about two years old.  They were all quietly resting when we visited.  The Cats were also resting.  My daughter thinks they look like our cat, but there is a difference.  These were a mix of a domesticated cat and a wild cat from Africa.  The New Guinea Singing Dogs were pretty interesting too.  One was wandering around, but the rest were napping. 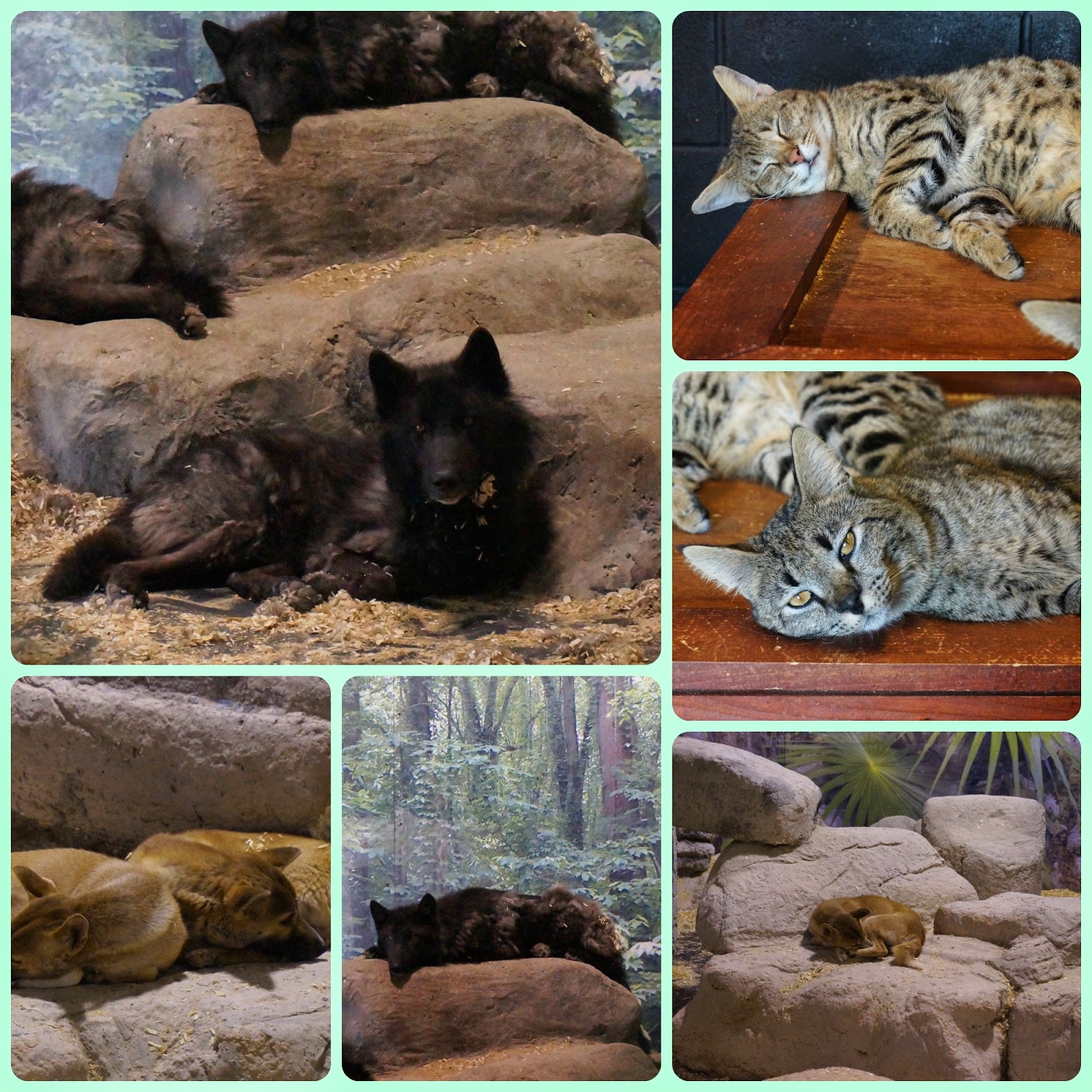 The picture below shows the rattle on the end of a rattlesnake's tail, a scorpion, a spider and a Gila Monster.  My daughter loved seeing the picture of the Gila monster because she had just read a story that had one in it. 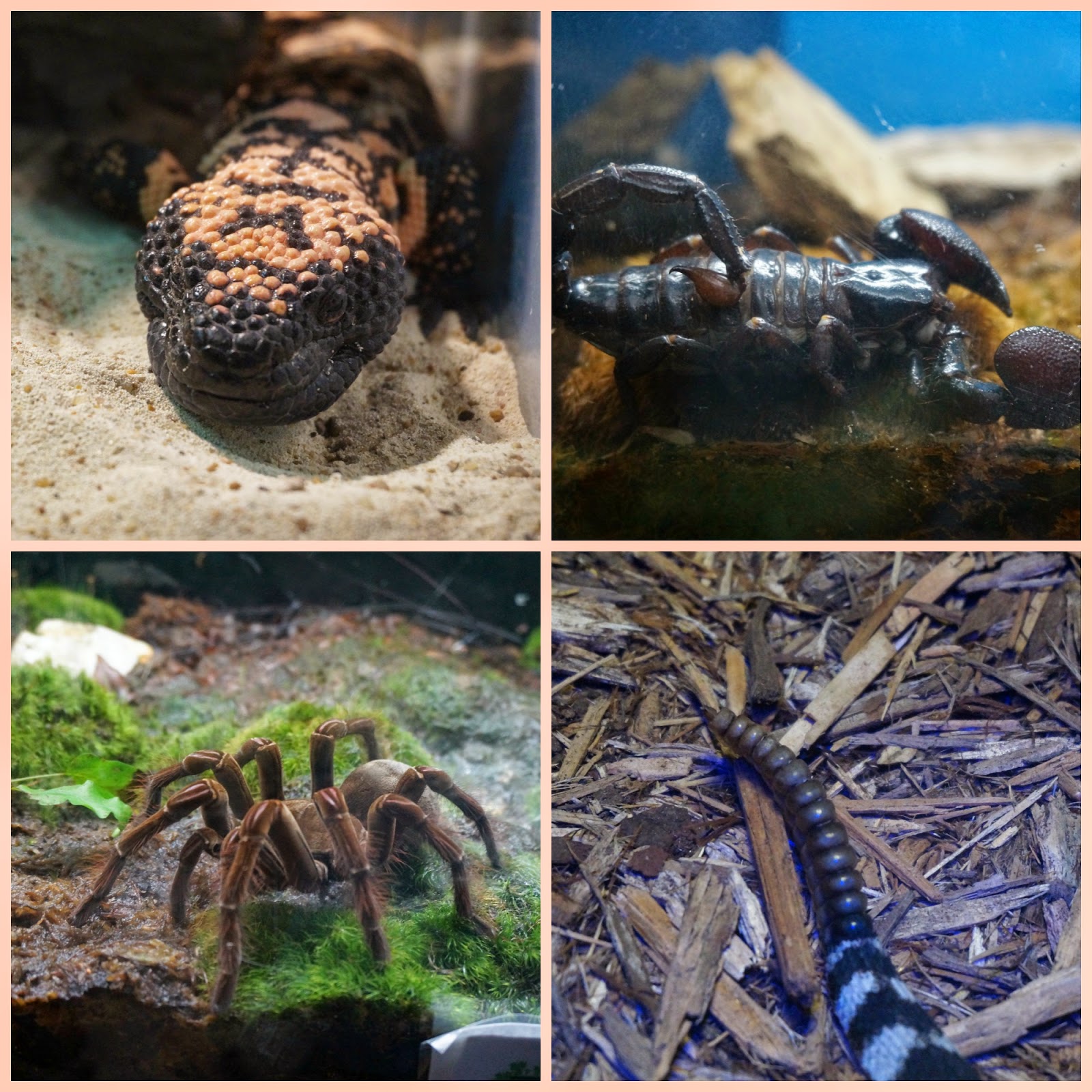 Now, I don't know very many children who would not find Branson's Wild World an interesting place to visit.  I also appreciate that they have stones or steps so a child, or someone short can still see in each area.  Yes, I had to use a couple!  I also liked that we could wander at our own pace and go back and forth if we wanted to.  We did go on a weekday, so there were no crowds.

Branson's Wild World also has a black light miniature golf course.  It was amazing.  The walls are all painted with dinosaurs, sea creatures, and snakes.  There are a few aquariums and live animal displays too.  Everything glows in the black light.  My children are already begging to go next time we visit Branson. 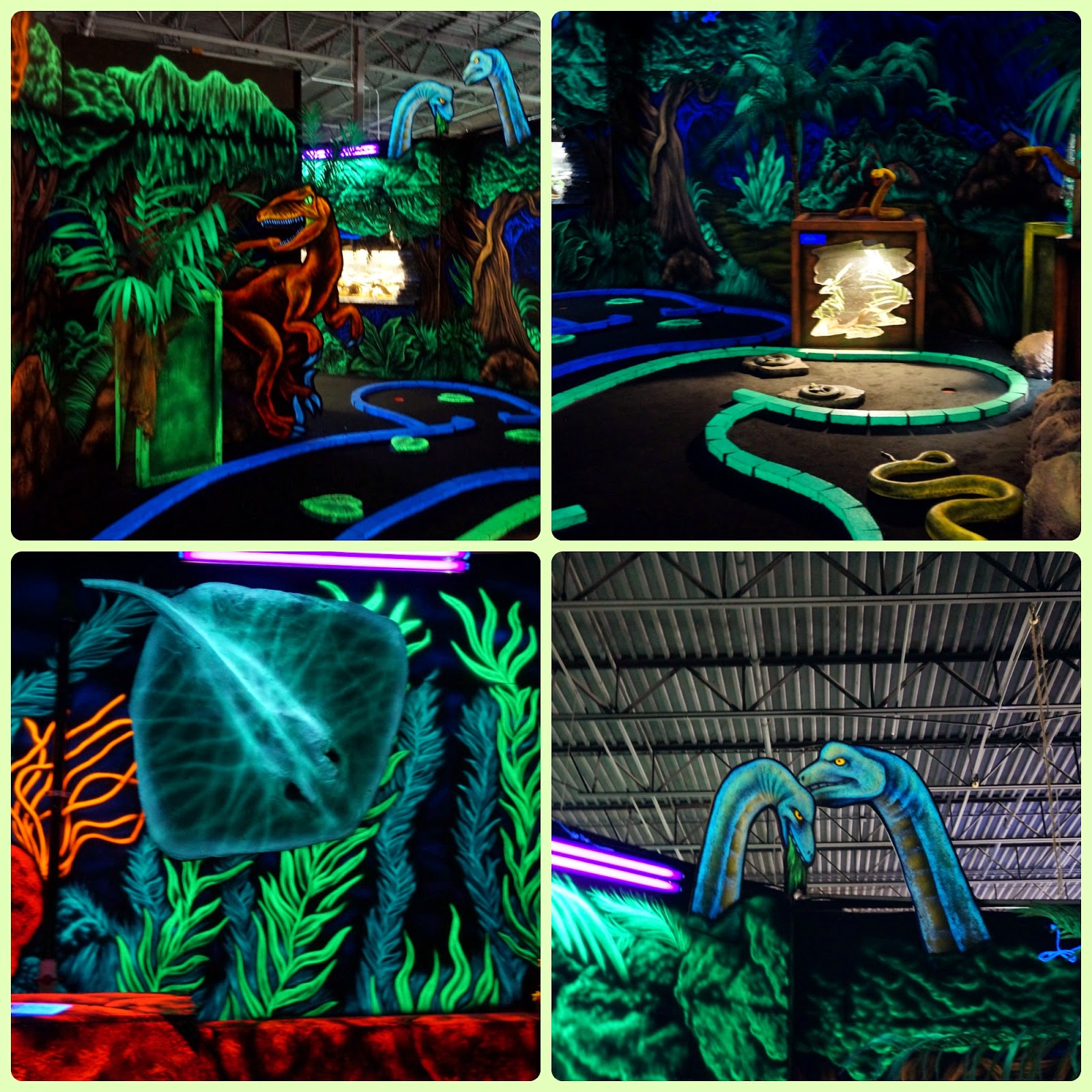 Last of all they have a free play arcade.  You may purchase your ticket for Wild World, or you can pay extra to include the miniature golf and game room.  You can play all you want. 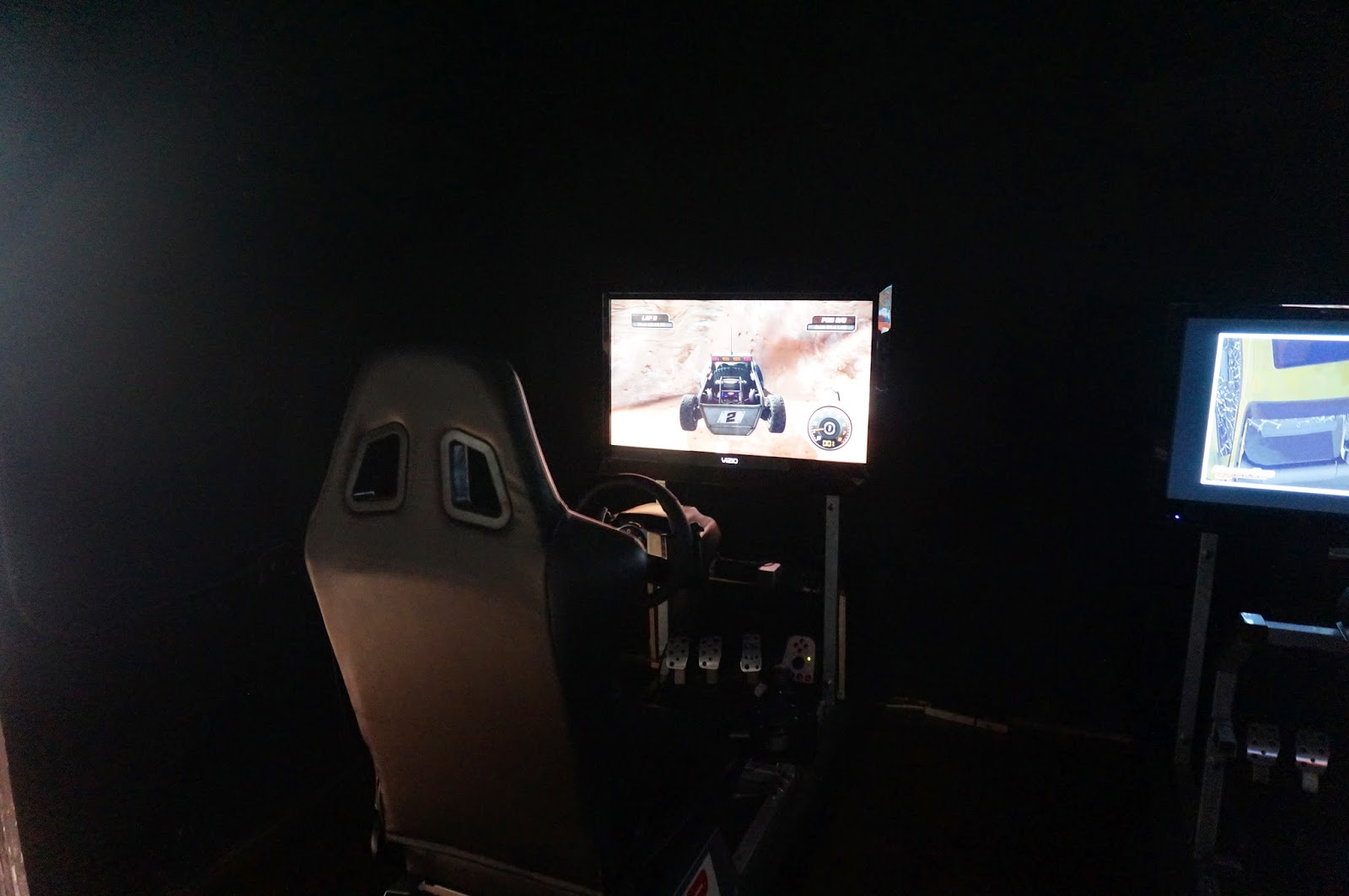 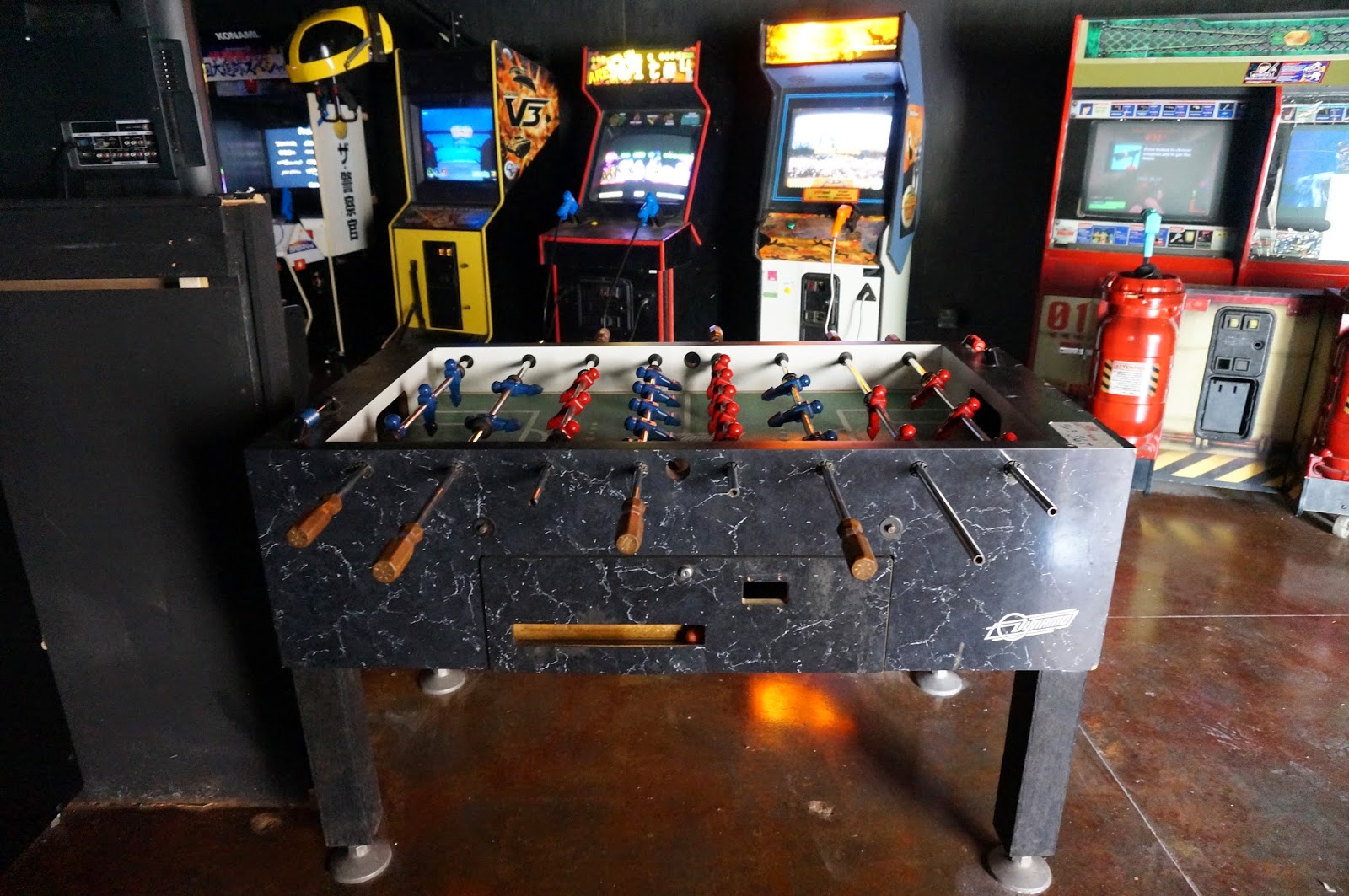 I would encourage you when you visit the Branson area to add Wild World on your list of places to see.  Thanks for stopping in today!  See you again soon.

Disclosure:I received admission for this review.