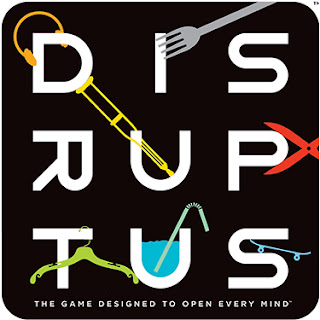 This new Funnybone game is seriously fun! It is called Disruptus.  Since there were 7 of us at home we decided to split up into 3 teams and 1 judge to start the game.  We thought this might be easier until everyone understood the rules and how the game was played.  After we had been at it for awhile everyone decided to play for themselves. 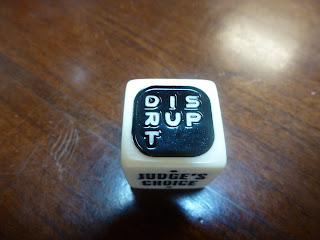 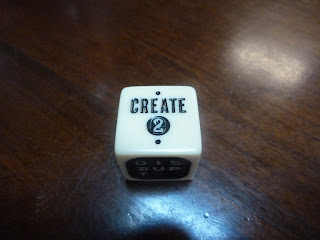 Since I had read over the rules, I was chosen as judge.  After breaking into three teams, I quickly explained the rules and we were off.  We did choose to use the timer because if not it could drag on a bit waiting for everyone to finish.  To start with the judge roles the die.  Choices on the die are:CREATE, TRANSFORM, IMPROVE, DISRUPT, JUDGE'S CHOICE and PLAYER'S CHOICE.  Each team/player is given a small sheet of paper where they can draw or describe their response.  So, depending on what is rolled the judge will turn over either one or two cards.  If CREATE is rolled the judge turns over 2 cards, for DISRUPT, TRANSFORM or IMPROVE only one card is turned over. There are pictures on each card of different objects. 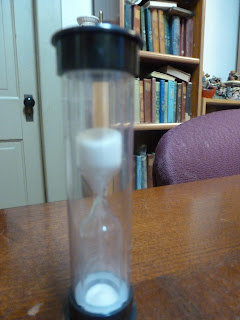 Let me take a minute to explain each activity to you.  If TRANSFORM is chosen you try to come up with a new use for the object on the card.  For example we turned over a picture of a hospital.  One person turned it into a storage area, another decided it should be used as a multi-level barn for the city, etc.   When IMPROVE is chosen you try to improve the object that is shown.  For example, one team added windshield wipers to a pair of sunglasses.  The CREATE option is one of the family's favorites.  For this one you turn over two cards and use both items to create a new object or idea.  You do not have to use the entire object, you can use parts if you wish.  Here is an example we had: we turned over a skateboard and a blow dryer.  So, some of the responses were a skateboard with a blow dryer attached to the back to power your skateboard, another attached it to the front to blow debris out of your way, and another attached the wheel of the skateboard to the blow dryer, so it could be rolled into place.  I think DISRUPT was the hardest to do, because with this card you have to invent something that would accomplish the same purpose.  Here is their example: If you turn over a card depicting a camera, you might come up with the idea of contact lenses that photograph images when you wink your eye.  For JUDGE'S CHOICE, the judge decides which activity they will do and for PLAYER'S CHOICE each player gets to choose which activity they want to do.  So, one person may CREATE, while another TRANSFORMs.

There are a couple other ways you can play the game, but this is the one that worked best for us.  As I said above, after a few rounds we broke up the teams and everyone played individually.  It took a few minutes for everyone to understand the game and of course to feel free to get creative, but I was amazed that we came up with so many different ideas as the play continued.  Everyone really enjoyed the game and it is now on our game shelf where it will be pulled out to be played on a game night.


The Disruptus game comes with everything needed for play, except the pens or pencils. Included is the Disruptus die, a timer, Idea Pad (the paper you write or design on), 6 Guide Cards, 100 Image Cards and they even include 10 Innovation Canvas Cards, where you can create your own images to be used in the game.  This is definitely a game to get you thinking and to get creative juices flowing.  Disruptus helps build innovative skills.  This could be used for fun, or even for school.  To my homeschooling neighbors, this is a fun game and educational at the same time.

From Funnybone Toys:
Disruptus™ asks players to look at objects and ideas and use different approaches — as determined by the roll of a die — to innovate.Disruptus™ draws inspiration from the very important practice of ‘disruptive thinking’. Disruptive thinking is one of the most powerful ways to innovate.It has been used to create ideas and objects like digital music, camera phones, and car sharing programs.Disruptive thinking is looking at an object or idea and coming up with an entirely different way to achieve the same end.So, in the case of car sharing, the innovators looked at the car rental industry and came up with a new approach that ‘disrupted’ the old conventional method.

Do I recommend DISRUPTUS?  YES!  We will also be reviewing another Funnybone game soon, so keep your eyes open and be sure to stop back soon for a visit At the Fence.

Last but not least, Funnybone has agreed to give one neighbor their own copy of Disruptus, so hurry and enter the giveaway!  To enter look at the two cards bellow, and tell me what you could create!


Disclosure:I received no monetary compensation for this post.  I did receive product for review purposes.  All quotes in red are from the sponsor's website or email.  All thoughts and opinions are my own.

Miranda said…
a toaster fire that required the fire extinguisher
August 1, 2013 at 7:05 PM

Cheryl @ Simply Shoeboxes said…
How about a fire works starter with an automatic fire retardant for those that went astray.
August 2, 2013 at 8:36 PM