Yesterday was not a normal Sunday for us, but I really enjoyed the day anyway.  My husband and the older children had to go out of town, and I stayed behind with M and M.  They are 12 and 16.  Since, I don't drive we had to stay at home instead of actually attending church.  So instead, here is what we did.

We started out the morning with a really nice breakfast.  I made scrambled eggs with sausage and onion mixed in. Yum!  I had them just like that, but the two girls put theirs in tortillas and had breakfast burritos with salsa.  After eating breakfast we cleaned up, cleared the table and some of us had to shower for the day.

Next we did a small class together with a new curriculum I am reviewing.  I will be sharing more on that later, so be sure to keep an eye out for the Not Grass review.  It was based on Proverbs 1 and includes drawing/coloring.  Before we started anything else we put our chicken for lunch in the oven and then we watched a preaching video together.

Below is one of the snacks the girls had later that afternoon.  M went to the little store and their bags of mini Reese's had melted and re-solidified.  So they sold them for $1 a bag.  She thought it was great to slice them into pieces to snack on. 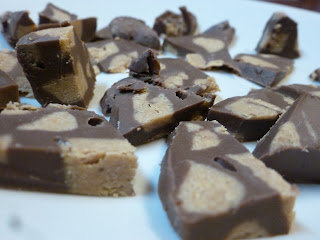 While we ate lunch, we watched a Buddy Davis video on creation.  They really enjoy these videos and we hadn't seen one in awhile.  After cleaning up from lunch we decided to sit down and play Yahtzee.  After three games, that the sixteen year old won every time we quit.  We still had fun.

Next we had to give the little male puppy a bath because his new owners were arriving to pick him up.  We got him all clean and dried and then sat around talking until they arrived to pick him up.  They LOVED him!  I think he will enjoy his new home.

After we were situated for the evening we fixed a light dinner.  I had a salad and the girls had pizza rolls.  One of their favorites! 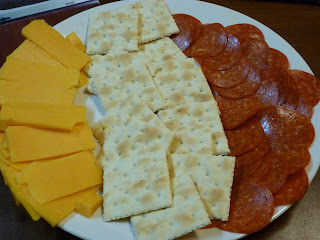 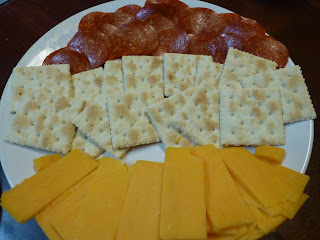 Later that evening we had snacks and played Scrabble.  We had a snack of pepperoni, cheese and crackers.  We actually played until the family came home around 11:00 pm.  It was a great day, with plenty of quality time together.  I think it was pretty special to them too. 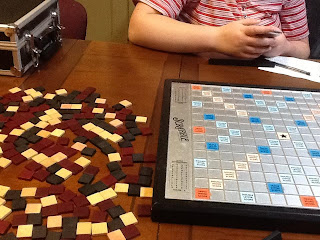 Have a great day!  See you soon, At the Fence!