Do any of your husband shave the old time way?  You know with the cup, shaving cream, and a straight razor?  My husband uses a disposable razor to do around his beard and the back of his neck. My two boys presently use electric razors, but I am just wondering how many people use the straight razors anymore. 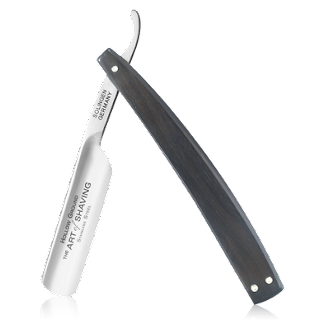 I remember reading in books about men using straight razors and have often thought it would be interesting to see someone use one.  Yes, I have seen them on a TV before, but I am talking in real life.  I mean that is how all men shaved at one time.  Many went to the barber shop where they used a straight razor.  Imagine trusting someone to use one of those on your face and neck!

I still remember the old joke about the man who went to see the barber for a shave and he kept getting nicked.  After a short time he asked the barber for a cup of water.  When the barber asked him if he was thirsty, he responded, "No.  I just want to see if my neck leaks!"  My brother and I thought that was so funny.

My husband has used the old fashioned cup with soap and the brush.  It was interesting back when he used to shave his face to watch him use it.  Yes, I used to watch him shave.  One of those first married things I guess.

Do barbers today still use a straight razor?  My husband and sons never go to one anymore so I wouldn't know.  We cut their hair at home, found it to be much cheaper to just learn to cut their hair and of course they shave at home themselves.  My one son needs to shave daily anyway for his job.  The other son is considering growing a beard, if it would just come in full enough!  I think both of them would have beards if they had to use a straight razor.

And of course the leather strop for straightening and polishing the blade was always mentioned in the old stories we used to read.  Although sometimes it was not being used for the razor!

So just out of curiosity, do any of you know any one who uses a straight razor?  Have a great day and stop by for a visit At the Fence soon!

Disclosure:This is a paid post, however all thoughts and opinions are mine.

Unknown said…
Hi – It’s good to read such interesting stuff on
the Internet as I have been able to discover here.
I agree with much of what is written here and I’ll be
coming back to this website again. Thanks again for posting such
great reading material!!