I have a confession to make here; I personally do not like seafood.  I do occasionally eat shrimp, but I am even picky there.  I prefer popcorn shrimp.  On the other hand, when it comes to my husband and daughters, Seafood Restaurants Monterey are right up their alley.  They like all kinds of seafood. 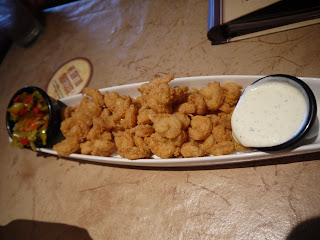 My husband found a favorite on our honeymoon and has never had it since, although he has tried many different restaurants to do so.  We went out to eat and he chose a stuffed flounder, that was filled with a crabmeat and cheese filling.  He has tried stuffed flounder many times since and can not find one that tastes just like the one from on our honeymoon.  I think it might have just been the company he had that night!  :)  Another favorite of his is shrimp in a garlic butter sauce.  I don't think he has ever tried raw oysters though!

The older girls both like to try fish and one of them really likes shrimp, as long as it is fried.  The boys will eat seafood, but I would not say it is their favorite.  Of my two younger daughters, the youngest will eat some seafood, but the older of the two usually orders chicken, or waits to eat when we go to a seafood restaurant.  Sometimes we order something ahead of time for her and she brings it in with us.

I even occasionally prepare fish at home, but when we do this I fix something for those of us who do not eat seafood.  It used to bother me just to smell fish.  Of course people keep trying to get me to eat seafood, but I have stopped even attempting to like seafood.  I even had a woman one time, who knew I did not like fish, try to trick me into eating french fries that were fried in her fish oil.  I could taste the difference after one bite and politely refused to eat anymore.

Do you have any recipes my family might like?  I don't mind cooking, as long as I don't have to eat it.  Feel free to share in the comments, or if you have a really good recipe, email me and we will share it here for all the neighbors!

Thanks for stopping in and hurry back for a visit soon!