I Lost My Wedding Ring

Would you believe I lost my wedding ring not once, not twice, but three times!  Now I did not loose my wedding rings Utah, Arizona, or New Mexico, but it was in the south twice.  We started out with matching wedding bands.  Not expensive, but nice.  About two to three months after we were married we went to the beach and were tossing a football around.  Somehow in all the fun and excitement, my ring flew off.  Needless to say we never saw it again.  Between the sand and everyone running it around it was lost forever.

Move forward about two years.  We had replaced my wedding band, but it no longer matched.  At this time I was expecting our first child.  Like many women, I experienced swollen fingers, so I occasionally removed my band and placed it in a safe place.  Usually on a tray in our bedroom, or if we were out I zipped it into a pocket in my wallet.  Well...one time while we were out I forgot to bring my purse.  My fingers started swelling, so I removed my ring.  I gave it to my husband and asked him to carry it for me until we arrived home.  I forgot to ask for it back when we returned to the house.  A day or two later I remembered giving it to him and asked him to give it to me so I could put it back on.  Oh no!  It was missing.  Somehow it had fallen out of his wallet and we had no clue where. 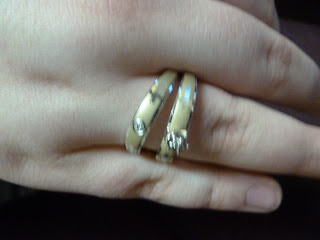 Several years later I had a new ring.  It had three diamond chips.  One larger one in the center and then two smaller ones on each side.  I noticed that one of the small chips had fallen out, so we took it to the store to have it replaced.  We had purchased a warranty on it, so we just had to send it in and wait.  Three weeks later I had my ring back and it looked great.

Move forward to a trip to Chicago.  I was working on my laptop and decided to take the ring off.  I laid it on my laptop keyboard before going to bed.  In the morning we had to run some errands, so some of us ran out while others packed the hotel rooms as we were heading out that day.  I forgot all about the ring until we arrived home.  Guess what?  Yes!  It happened again.  No ring.  We searched the luggage, the laptop bag, the vehicle and we called the hotel.  No ring.  Three times I have lost my ring.

I have a new set now.  We still do not match, but that is OK.  Have you ever lost your wedding ring?  Or perhaps another important piece of jewelry?

Thank you for allowing me to share this story with you.  See you soon At the Fence!

Disclosure:This is a sponsored post, however all thoughts and opinions are mine.