Recently, we had our vehicles in for a routine check-up, along with our friends vehicle. He used to live in Ohio and go to a place like: autoservicecolumbusohio.com. So this time he went to the same shop we did. We had a coupon for a routine checkup that they allowed us to use on all four vehicles. Yes, I said all four! 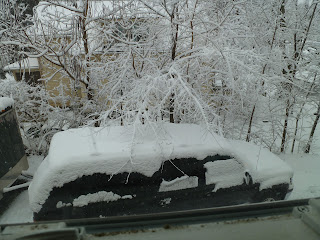 We took three of them in the same day. One of his was towed in, because after sitting in the cold and snow for a few weeks the emergency brake would not release. So we knew before we started that at least one repair was needed! My husband and one of our sons drove the other two vehicles over. They had to hang around for a couple of hours until one of the vehicles was done so they could drive home. That was not a problem because they went to a couple of stores and then had lunch together. Mexican of course!

The first vehicle just needed the brakes repaired, a minor repair. Then came the bad news. Both other vehicles had a couple of more costly repairs. They needed brakes replaced, there was a leaky coolant hose, and one needed bearings replaced. They were able to get two of them done and one had to stay overnight.

The next morning our daughter drove over with my husband to pick up the other vehicle. In the meantime my son took the pickup truck to work. We had not sent the truck in to be serviced because it was a reasonably recent purchase. Well, we received a call and our son told us that he was ready to come home, but the truck would not start. He managed to get a jump and drove straight home. My husband called the service department and spoke to the same man who had done the work on the other vehicles. He offered to pick the truck up the next morning and check it out for us.

When we received his phone call later in the day he said it must have just been the cold as they could find no other problems. We had him go ahead and do the oil and lube and we would pick it up later that day. He offered to deliver it back to us, but we had to run out anyway.

We were extremely pleased with the service. Not only did they do the repairs in a timely manner, they also allowed us to use the coupon for the maintenance check and the oil and lube for all four vehicles. Nice!

Ant neighbors out there that have a special auto repair shop they use? Is there a reason why you chose a certain shop? Leave a comment and let us know.