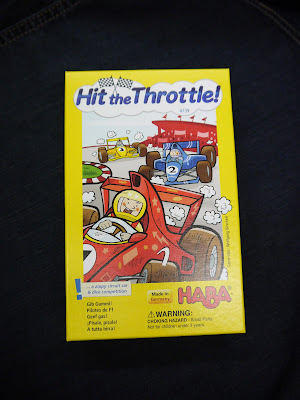 How about a nice compact game for travel? HABA Hit the Throttle is perfect! It comes in a box that you can pack for trips. Here is how we used it. We went out to eat with some friends who have a 6 year old. Of course he quickly became bored while the adults were talking, so we pulled out Hit the Throttle. The table quickly became quiet while they competed to see who could get the correct cars to the finish line first. My daughter was able to take several pictures as the game progressed. They played several times before we left. 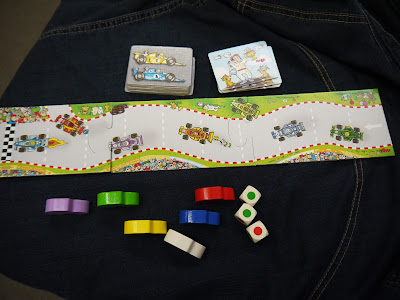 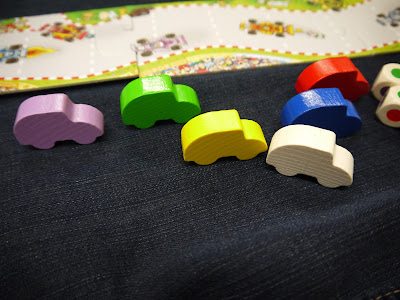 A zippy circuit competition with dice for 2-5 racing drivers. (Ages 4-99) Included is one game board, in three parts, that attaches together like a puzzle. Then you have 6 wooden racing cars, 15 assignment cards, 3 color dice and of course a set of directions. 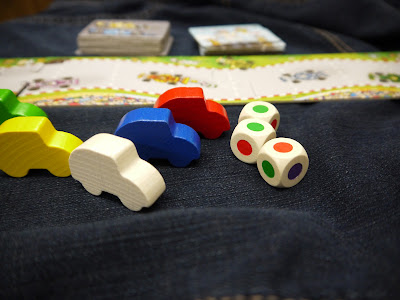 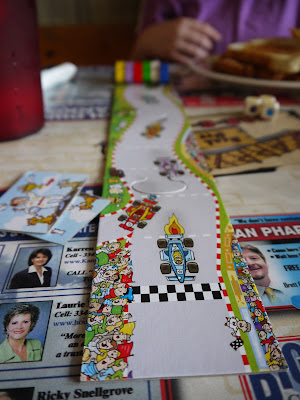 Each participant chooses an assignment card. Do not show it to anyone else! This card will show two colored race cars. It is your job to see that these two cars get over the finish line first. he only problem is, throughout the game your opponents can move cars too! Any of the cars! So, let's get started! Put your board together and line the cars up. The first player rolls all three dice and chooses one die to set to the side. He/she moves that color car forward one space. They then roll the two remaining dice and follow the same procedure. They then roll the remaining die and move that car one space. The next player then takes their turn. The first player to get both of their color cars across the finish line yells, "Hit the throttle!" He/she must show their assignment card to prove their cars made it to the finish line. Then start all over again. 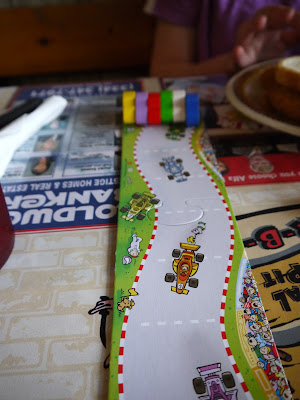 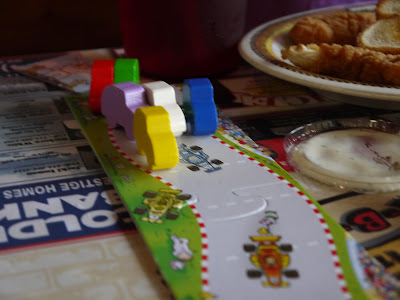 The game and pieces are well made. Exactly what you would expect from HABA. I would recommend this game to my neighbors and I am happy to tell you one neighbor will receive a Hit the Throttle Game from HABA! 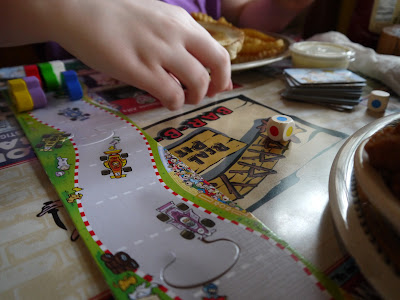 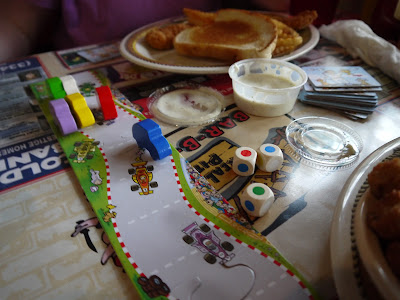 
It was a risk to start a company in an empty factory building on April 26, 1938, in uncertain times and with limited capital resources. But Anton Engel and Eugen Habermaaß were willing to take this risk: they founded the Anton Engel company, a factory for polished wooden products in Bad Rodach, then going on to found a second company a few days later with Karl Wehrfritz: Wehrfritz & Co.
In 1940, Eugen Habermaaß assumed sole responsibility for the company after his equal partners pulled out. With vision, a strong will, and perseverance, he saw the companies safely though the Second World War and the subsequent occupation.
In 1955, Eugen Habermaaß passed away quite suddenly and unexpectedly at the age of 53. Though his wife Luise Habermaaß had been helping out at the firm for a number of years, her next step took a great deal of courage: the mother of four took the helm without any formal training in business or technology. Her sense of social responsibility towards the company’s employees back then is the main reason the company is still in existence today. Luise Habermaaß quickly demonstrated a fine sense of the demands of the market. With a great deal of determination and the support of her long-term employees, she fought to make her own personal economic miracle a success in the 50s. Luise Habermaaß, honorary citizen of the city of Bad Rodach, died in 2003 shortly before her 97th birthday.
Her son Klaus Habermaaß had already joined the company in 1961 after completing a traineeship in cabinetmaking and getting his engineering degree from the state university. The 24-year-old began as a sales assistant, and went on to assume responsibility gradually for the technology, finance and development divisions, while his mother Luise Habermaaß continued to focus on product range development at Wehrfritz. This division of labor worked quite well.
Today Klaus Habermaaß is the managing director of the corporate family that he continues to lead with an unmistakable sense of market and product development, a strong will, and a great deal of social responsibility towards the company’s employees. The continual development of the company was and is a central element of his philosophy. And as an honorary citizen, the needs of the community and the development of the city of Bad Rodach are also close to his heart.
Today we are a successful corporate family. Like every family, we have parents who founded and built up the family: Eugen and Luise Habermaaß; and children who will lead us into the future: Klaus Habermaaß. Neither war, nor the division of Germany or economic fluctuations could hold this family back. One of their greatest merits: they have created and continue to create jobs in a region that is economically disadvantaged. 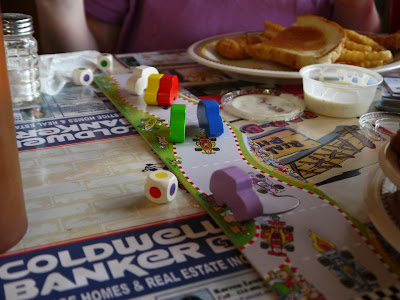 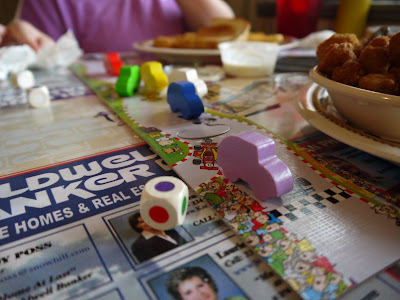 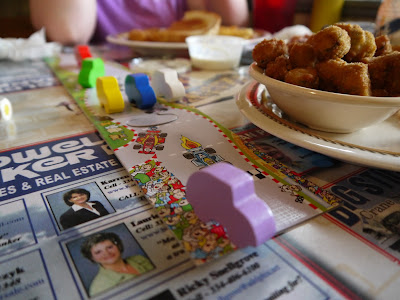 Hurry up and enter the HABA Hit the Throttle giveaway!

Disclosure:I received no monetary compensation for this post. I did receive a HABA Hit the Throttle Game for review purposes. All quotes in red are taken from the sponsor's website or email. All thoughts and opinions are my own.

Colleen Maurina said…
I think we would also like their Clever Bear Learns to Count Learning Game.

Coolestmommy said…
We think Blitzschnell! looks like another fun game.
February 6, 2013 at 9:15 PM

rubynreba said…
I like the pushing car walker wagon.

Unknown said…
When my son is a little older I think he'll love the Clever Bear Learns to Count Learning Game.
February 13, 2013 at 3:45 AM