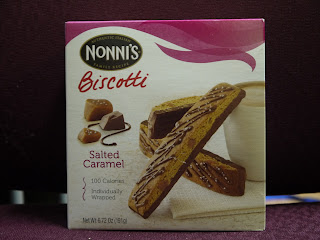 How many of you LOVE Biscottis?  We received the Nonni's Biscottis, Salted Caramel.  What a great snack for this chilly weather we are having lately.  You can sit down with a cup of Hot tea, hot chocolate or your favorite coffee and enjoy!  My daughters (25 and 27) were divided on their opinions of the Salted Caramel Biscotti.  One said she didn't really care for the salt and the other said it tasted sort of like a chocolate covered pretzel.  My husband liked it too! How do you like your Biscottis? 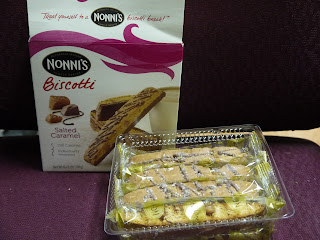 I also shared with some of the ladies in New Mexico and they liked it too!  A great blend of Biscotti, chocolate, caramel, and salt.  This is a perfect snack to serve when guests stop by, maybe the ladies group, or just some friends.  Check out their Pinterest page for some interesting ideas for your Biscotti.  Maybe you could share a pin! 
Nonni’s Biscotti grew out of true Italian tradition. In the little town of Lucca, Italy along narrow cobbled lanes surrounded by elegant piazzas, our Nonni (an endearing term for Grandma) made biscotti to share with family and friends. When Nonni came to America, almost a century ago, she brought the family recipe with her.
To this day, the same family recipe using real eggs, butter and gourmet bittersweet chocolate is still used to give our biscotti a light, crunchy texture that is delicately sweet. Our devotion to quality ingredients has been the foundation for the continued success of the company, and the key reason Nonni’s Biscotti is the number one selling biscotti in the country. 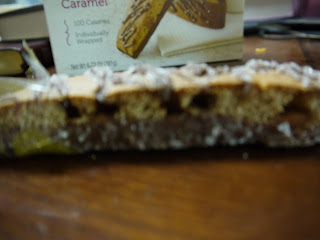 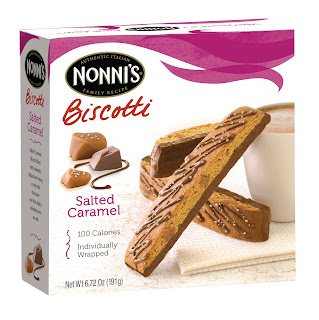 Nonni's Biscottis are the type of snack you hide in the cupboard for the adults to enjoy.  I have to confess my younger children like them too!  Yes, I share! (sigh)

One neighbor will receive a package of Salted Caramel Nonni's Biscottis.

DebbyM said…
Biscotti is good ANYTIME. =) But its a good AM snack at breaktime with some coffee.