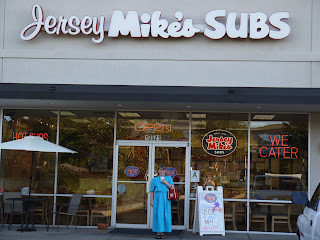 How many of you have had Jersey Mike's Subs?  This was my very first time.  My husband, 11 year old daughter and I, all went to Jersey Mike's!  It was great! 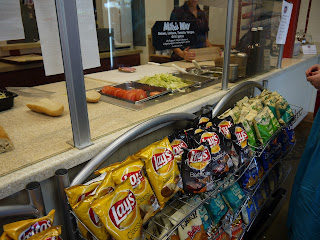 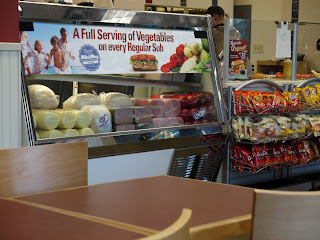 Mike’s Subs opened as a storefront location in the seaside town of Point Pleasant, N.J. in
1956. It offered unparalleled service and exceptional quality submarine sandwiches, which
were a new concept at the time.
• Because of its location on the Jersey Shore it grew quickly in popularity among the
thousands of surf and sun seekers from New York to Philadelphia to Washington, D.C.
• By the early 1970s Mike’s Subs was a thriving landmark famous for its lively and friendly
service and its fresh, quality submarine sandwiches.
• In 1975, Peter Cancro, a 17-year-old high school senior who had worked for Mike’s Subs
since he was 14 and loved the business, bought the operation with the help of his football
coach. At the time, Cancro wasn’t even old enough to legally slice a sub.
• Over the next decade, Cancro opened two other local Mike’s Subs stores and built on the
cult-like following that Mike’s Subs already enjoyed.
• In 1987, Cancro began franchising the Mike’s concept. He changed the name to Jersey
Mike’s Subs to capture the authenticity of the original store. Today, Cancro is CEO of Jersey
Mike’s Franchise Systems, Inc., headquartered in Manasquan, NJ.
• Jersey Mike’s Subs continues its steady expansion throughout the country and is now in most
major metro areas including Chicago and Washington, DC. With 60 restaurants in California
and many more on the way throughout the nation, authentic Jersey Mike’s subs are now
available literally coast to coast. 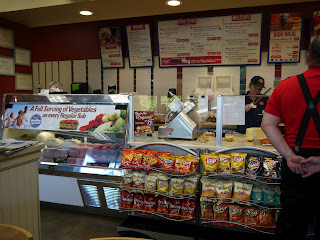 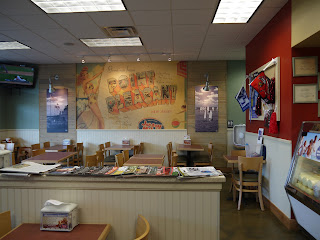 My husband ordered their Club Supreme.  It has roast beef, turkey, bacon, and swiss cheese.  Then you get to add toppings.  My husband chose lettuce, tomato, mayo, spicy mustard, oil and vinegar, and salt and pepper.  This is one big sub!  My daughter chose their children's salami and cheese.  Of course she wanted all the toppings too!  Now, since I am on my diet and I am still watching carbs, I chose the Club Supreme, but asked them if they could make it into a salad.  Guess what?  They already have that option.  They call it a Sub in a Tub!  My daughter thought that was a great name!  It is extremely filling!  I have never had a salad with swiss cheese before, but it was so good.  I added onions and ranch dressing.  Perfect! 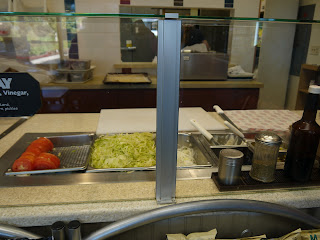 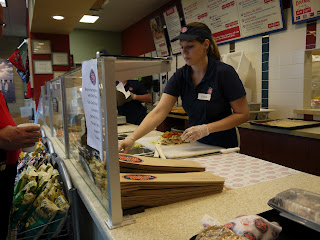 We ate at the restaurant in Springhurst Town Center, and I want to say here, it was extremely clean.  The young ladies who work there were very pleasant and polite.  They quickly answered all our questions.  Thank you Sydney, Hilaree and Gina!  You did a great job! 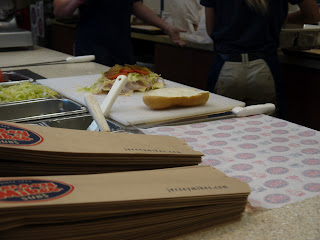 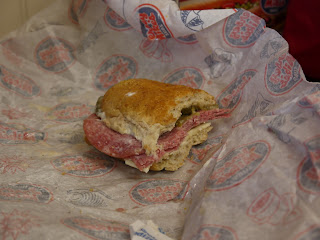 Here is one thing I really liked about Jersey Mike's Subs, they slice all the meat for your sandwich right there in front of you.  It is not pre-cut meat that has been sitting in a container in the back, or sitting in a container waiting to be used.  The cheese is handled the same way.  It is cut when you place your order.  Fresh!  You can choose from a mini, regular or giant roll.  They say the giant is perfect for sharing!  You can also choose whole wheat.  Wraps are another option.  You can click here to see their menu! 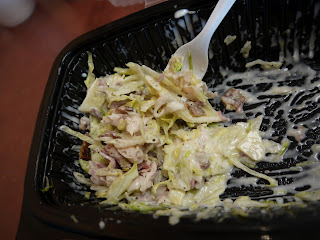 We also received a cookie apiece because it was our first visit ever.  I even tried a little!  It was very good.  Chocolate Chip of course! 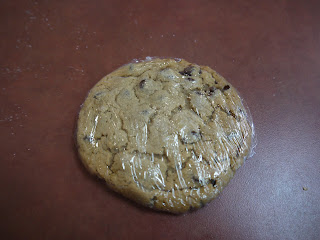 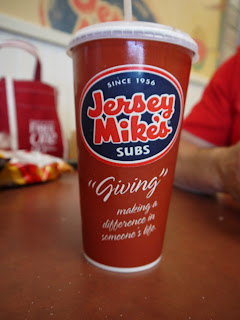 Jersey Mike's gives back to the community:

Giving back to the community has always been a guiding principle at Jersey Mike’s. It’s a philosophy
that Jersey Mike’s founder and CEO, Peter Cancro, has emphasized to each and every Jersey Mike’s
store owner: support the community that supports you. In 2011, locations throughout the country raised
more than $2 million for worthy local charities and distributed more than 200,000 free sub sandwiches
to help numerous causes. 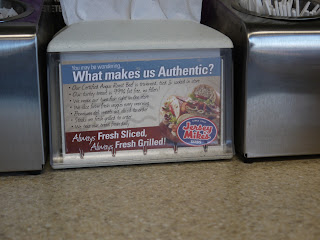 Will I go back?  You can count on it!  Well worth going out of the way for!  Oh and be sure to sign up for their Email Club, you will receive bimonthly emails informing you of specials, along with coupons.  And for your birthday, you will receive a sub and cookie.  Great deal!

Disclosure:I received no monetary compensation for this post.  I did receive free Jersey Mike's Subs for review purposes.  All quotes in red are taken from the sponsor's website or email.  All thoughts and opinions are mine!

Literary Winner said…
You won't see it on that menu page but we LOVE the Provolone, Ham and Salami. I grew up on Jersey Mike's and miss it terribly. I try to get one every time we're near one which isn't often.

My grandmother lived around the corner from the original store!
September 21, 2012 at 7:59 AM