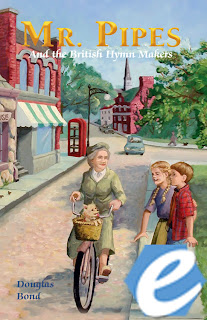 Mr. Pipes and the British Hymn Writers is the first book in this series. The story line is about two siblings who are spending time in a small village in England.  At first the boy thinks it might is going to be boring. Then they meet Mr. Pipes who teaches them about many of the British Hymn writers.  You see the attitude change in the children the more they are around Mr. Pipes.

Since my daughter LOVES reading and music, she really enjoyed reading this book.  She already knew several of the hymn writers that were covered in the book, but did learn about a few she had not heard of.  We do quite a bit of reading regarding missionaries, preachers, and hymn writers so it was good for her to learn of some others.  This would be a great book to read together as a family.

My daughter loved reading about Isaac Watts.  She has been quoting., "Father do some mercy take, and I will no more verses make."  She also liked his acrostic at age 7.  Amazing!

You can presently purchase Mr. Pipes and the British Hymn Writers in the PDF download for $8.79 on the Christian Liberty Press website.  They have the other Mr. Pipes books available too!

Be sure to click on the link below to see what other Crew members have to say about Mr. Pipes and the British Hymn Writers.

Disclaimer:  As a member of the TOS Crew, I received this product, at no cost to me, in exchange for my honest review.  All opinions are mine.

HannahAchrissmile said…
I enjoy reading the stories behind hymns, it always adds a lot of depth to the song. It sounds like this would be a great way to introduce these stories to children!

BellePepper said…
Thank you so much for this honest review! I really think my son would love these stories!
August 25, 2012 at 9:42 AM